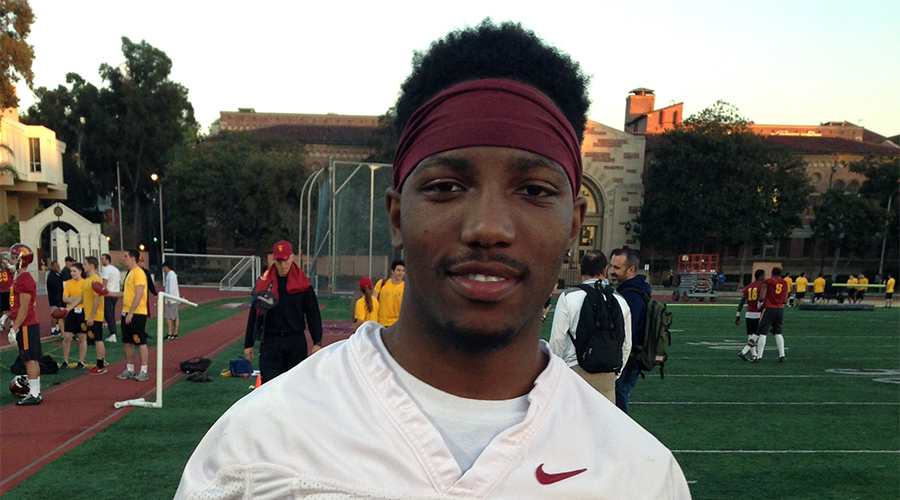 The Trojans came out on Saturday in shoulder pads and helmets for the first time this spring and took part in a two-hour practice session that, coming on the heels of a Thursday workout that was dominated by the defense, was much more evenly split this time around.

Darreus Rogers opened up practice with a fantastic leaping 25-yard touchdown catch over Ryan Dillard along the sideline, but there were plenty of highlight-reel plays to go around on both sides of the ball – particularly down near the end zone.

Mid-way through practice cornerback Kevon Seymour had the defense hooting and hollering after he made a beautiful diving interception on a pass from Cody Kessler that was intended for JuJu Smith.

In the end, however, it was the offense who celebrated last as Kessler hit tight end Connor Spears over the middle for a 15-yard touchdown strike on the last play of the session-ending two-minute drill.

“I thought there was some good work,” Sarkisian said following practice. “It was really good to see that our defense was able to create. There were a couple of turnovers in the red zone which is huge. We pride ourselves on red zone defense. We also pride ourselves on our efficiency in the red zone offensively. Last season we were really good, I think we were over 75 percent when we were in the red zone. So, we are very aggressive, and I think that showed up today, and obviously the offense winning the finish challenge there with a touchdown pass to Connor Spears.”

The arguable star of the day was Seymour, who battled Smith on a number of occasions on Saturday and came out on the winning end more often than not. In addition to his interception, Seymour also broke up at least three passes.

“I really challenged Kevon after the first practice,” Sarkisian said. “Even though he’s going to be a senior, that doesn’t mean that we can’t continue to improve, and improve our competitiveness every single play, every single day, and I think we’re starting to see that more with Kevon.”

With the departure of Andre Heidari, the Trojans need to find a new starting placekicker for the 2015 season, and Matt Boermeester and Alex Wood have both shown well this spring as they take part in a competition that Sarkisian has declared completely open.

Both kickers’ strong play continued on Saturday, with Boermeester and Wood each going 4-for-4 during a field goal period.

In his post-practice media scrum, Sarkisian appeared pleased with how both kickers have been striking the ball, but he was also quick to give a fair amount of credit to long snapper Zach Smith and holder Conner Sullivan.

“A lot of times we always want to focus on the kicker, [but] the operation is really key, and we’re fortunate to have our snapper and holder coming back in Zach and Conner,” Sarkisian said. “That helps new kickers coming in, knowing the snap is really good, the hold is going to be there, and they can focus on their job – and that’s the timing, and then ultimately striking the ball, and kicking the ball.”

– Sarkisian, once again, said that there is no new update on tight end Bryce Dixon, who has been absent this spring due to a student-conduct issue.

– When asked about tight end Jalen Cope-Fitzpatrick, who missed last season after having been declared academically ineligible, Sarkisian indicated that he is still shaking off some rust in the early goings this spring.

– Cornerback/wide receiver Adoree’ Jackson attended a funeral and was not in attendance. Chris Hawkins and Jonathan Lockett continued to split reps with the No. 1 defense at the cornerback spot opposite Kevon Seymour in Jackson’s absence. Hawkins and Lockett also took reps at free safety with the No. 2 defense again as well.

– There appeared to be a greater focus on the run game with shoulder pads added to the equation. Justin Davis and Soma Vainuku – who has been taking plenty of reps at tailback this spring – both had some nice runs.

– Stovall, Redd, Johnson and Lewis all were offered by USC on Saturday, as was Class of 2017 WR Terrell Bynum (Anaheim, Calif./Servite) and RB Stephen Carr (Fontana, Calif./Summit).

– Vainuku ran for a physical 10 yards.

– Kessler tried to connect with Isaac Whitney outside, but Seymour was there to deflect the pass.

– Max Browne hit Christian Tober over the middle for close to 10 yards.

– Browne threw along the sideline, and Rogers leapt over Dillard to bring down the 25-yard touchdown.

– Kessler connected with Steven Mitchell outside for 10 yards.

– Jalen Greene dropped back, scrambled and ran for a gain of 10 to 15 yards.

– Kessler threw to Smith in the end zone, but Seymour was there with him and made a diving interception.

– Kessler threw a red zone strike over the middle to Smith for a touchdown.

– Kessler hit Mitchell over the middle for a gain of close to 20 yards before Leon McQuay III made the stop.

– Kessler hit Whitney outside for a gain of close to 10 yards.

– Kessler tried to connect with Smith outside, but Seymour broke up the pass.

– Browne hit Mitchell over the middle for a 15-yard gain.

– Ricky Town threw over the middle, but Matt Lopes picked it off and took it to the house.

– Claude Pelon batted a Kessler pass down at the line.

– Kessler connected with Smith outside for a gain of 15 yards.

– Kessler tried to connect with Whitney outside, but Seymour broke up the pass.

– Kessler hit Spears over the middle for a 15-yard TD strike.