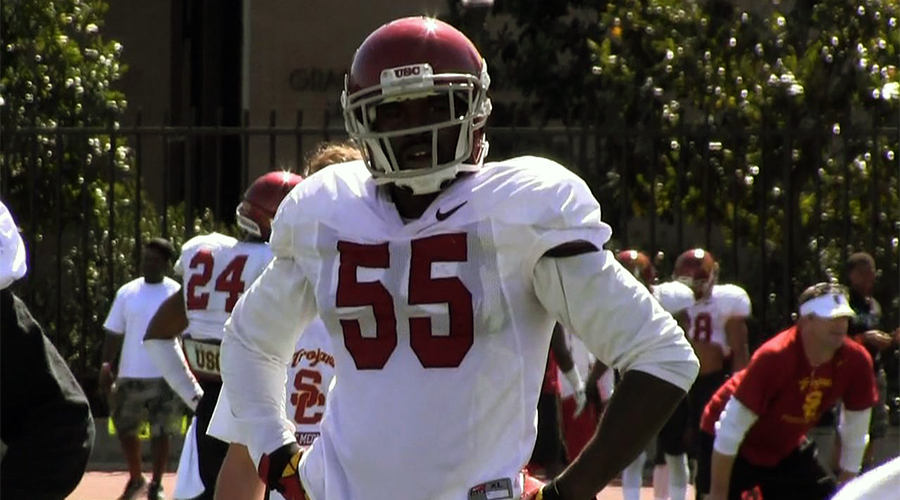 The pads were popping on Cromwell field on Saturday as the Trojans took part in a two-hour practice in full gear that featured some standout play on both sides of the ball. It was the defense that got the first and last laugh, however, as Scott Felix blew past Connor Spears and leveled a walk-on ball carrier during an early Oklahoma gauntlet-style drill, and on the final play of the day, MIKE linebacker Lamar Dawson picked off a Cody Kessler pass and returned it for a score.

“It was a really physical practice,” said USC head coach Steve Sarkisian. “It wasn’t all completely live, but the guys were really physical. The offense had taken care of the ball really well the last couple of practices and all the way through this one until the last play, and Lamar Dawson got a pick-six, which was really cool.”

Dawson, who sat out the 2014 season while recovering from a knee injury, had a strong practice. In addition to the interception, he also broke up a pass from Kessler to Jalen Cope-Fitzpatrick, dishing out a nice hit to the big tight end.

It was a big day for the wide receivers on the offensive side of the ball. JuJu Smith, Isaac Whitney and Ajene Harris all had long touchdown receptions, while two-way star Adoree’ Jackson spent the day on offense and stood out as well, catching a highlight-reel 25-yard touchdown of his own.

The offense, as a whole, has started to up their performance level as of late – something Sarkisian said has come about, due in part, to the relentless play of the defense.

“When the defense makes plays, it makes the offense play faster and better,” Sarkisian said. “It makes guy’s like Steven Mitchell – who we’ve been challenging on making those difficult contested catches – have to make those catches. It makes Cody – a guy who we’ve been challenging on anticipating more throws – to have to anticipate those throws, because when he’s late those balls are getting knocked down. It all works hand-in-hand. It goes both ways, and I think the defense is really making the offense better.”

Looking to get healthy

Immediately following one of the most physical practice sessions of the spring, Sarkisian said that he would scale back the contact this week.

“We’ll probably have to back off a little early into next week to try to get a little healthy, so that we can come back next Saturday and have another really good, physical practice.” Sarkisian said. “We’re a little nicked up.”

Cornerback Lamont Simmons returned to practice on Saturday after sitting out Thursday’s workout due to a hamstring injury, but Sarkisian said that safety Leon McQuay III suffered a hip injury. Offensive lineman Chuma Edoga (ankle) and defensive lineman Joey Augello were sidelined for the first time this spring on Saturday.

Wide receiver Ajene Harris practiced and performed well, but Sarkisian noted that the hamstring injury that forced him to miss some time recently, as well as this past fall, still isn’t back to 100 percent.

“He’s had this nagging hamstring that’s been going on for months that has hampered him some,” Sarkisian said. “I don’t think we’ve gotten the full-strength Ajene Harris since last training camp. So, hopefully by fall camp that’s what we get out of him because he is a very good football player.”

– Also during the early Oklahoma drill, Claude Pelon and Delvon Simmons each had big stops, and Zach Banner caught everyone’s attention on one rep when he dished out a pancake block on Pelon.

– Olajuwon Tucker continued to run with the No. 1 defensive group at WILL linebacker.

– The two safeties who went with the No. 1 group for a majority of the day were Chris Hawkins and McQuay.

– With Jackson on offense, Jonathan Lockett spent most of the day at the starting cornerback spot opposite Kevon Seymour.

– Plenty of prospects were on the sideline on Saturday. Some of those spotted were incoming Trojans quarterback Sam Darnold, Class of 2016 wide receiver Grant Porter and running back Melquise Stovall, Class of 2017 cornerback Darnay Holmes, as well as Long Beach City College defensive lineman Josh Allen. Class of 2016 quarterback Matt Fink (Glendora, Calif./Glendora) was also there, and he received an offer from the Trojans afterwards.

Sarkisian gave his impressions of the five mid-year enrollees through three weeks of spring practice.

LB Cameron Smith – “I think Cam Smith has shown flashes at linebacker – some playmaking ability which has been really positive.”

WR Isaac Whitney “Obviously, Isaac is a little bit behind because of just lack of knowledge of the system, but we do see flashes out of Isaac when he gets the ball in his hands of what he can do. I’m glad we have him for spring, and then we get him again in fall camp, to understand the system.”

QB Ricky Town “I think Ricky Town is up and down. That’s understandable for a quarterback – his first time playing college football. He does some things and you go, ‘wow, that’s a really good read’ or ‘that’s a really good play.’ And then he makes another throw and you think to yourself, ‘what are you thinking?’ And then you go, ‘I know what he was thinking. He wasn’t. He doesn’t know what he’s doing. You know, he’s a true freshman.’”

OL Chuma Edoga – “He’d been hampered by an ankle injury last practice which really held him out of today. He had been doing really well.”

OL Roy Hemsley – “I think the future is really bright for Roy Hemsley. The game is a bit new to him, but he shows flashes of exactly why we wanted him here, and he’s going to be a good player for us.”

– Kessler hit Darreus Rogers over the middle for a gain of 15 yards.

– Kessler completed a quick pass outside to Steven Mitchell for close to 10 yards.

– Soma Vainuku ran hard up the gut for seven or eight yards.

– Browne hit Whitney outside for a gain of 12 or 13 yards before Matt Lopes stopped him.

– Kessler tried to connect with Smith downfield, but Kevon Seymour broke up the pass.

– Kessler hit Harris over the middle for a gain of around 20 yards before McQuay made the stop.

– Kessler tried to gain some yardage after scrambling, but Dawson limited the play to no gain.

– Smith stopped Pinner for a loss.

– Greene connected with Robby Kolanz for a gain of around 15 yards.

– Davis made a nice cut at the line and gained close to 10 yards.

– Kessler drilled a pass over the middle to JuJu Smith for a 10-yard gain.

– Kessler threw a 10-yard touchdown pass outside to Smith.

– Kessler connected outside with Jackson who ran up the field for a 15-yard gain.

– Browne found Mitchell with a quick pass, and he bounced it out for a gain of close to 20 yards.

– McQuay ran down Vainuku to stop the play for no gain.

– Greene threw a 30-yard touchdown pass to a wide-open Jackson.

– Town connected with Spears for a gain of 10 yards.

– Dawson stopped Davis for no gain.

– Davis weaved his way through traffic to gain 15 yards.

– Kessler hit Smith over the middle for a 15-yard touchdown.

– Browne hit Whitney with a quick pass outside, and he got by a defender and darted off for an 80-yard touchdown.

– Kessler rolled out and hit Smith for a long touchdown.

– Browne hit Harris over the middle, then he cut outside and broke free for a 50-yard-plus touchdown.

– Kessler hit Rogers for a gain of 10 yards.