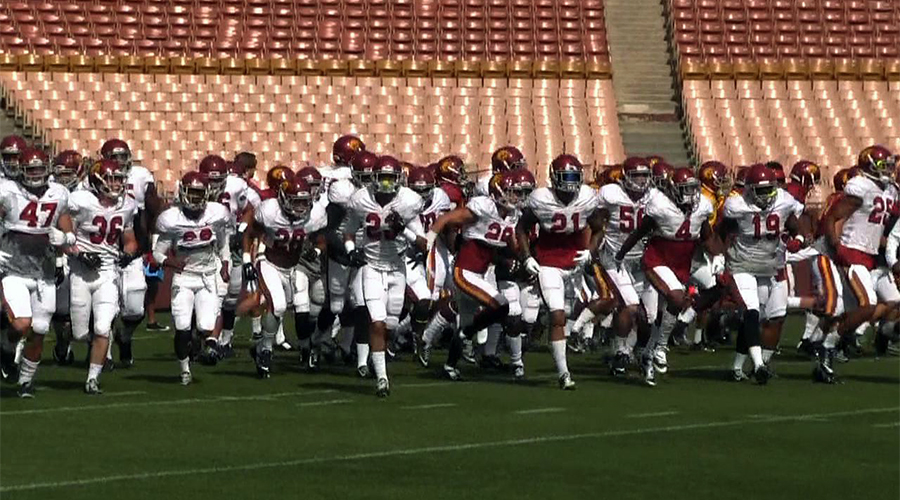 The Trojans were back in the Coliseum on Saturday, taking part in a full-pads practice that was easily the most physical of the spring so far.

With the session opening up with a spirited Oklahoma drill, and the team spending a good portion of the day focusing on 11-on-11 work, it was the defense that came up with some inspired play and really stole the show, with Cameron Smith, Su’a Cravens, Kevon Seymour and Lamont Simmons all making interceptions, and Claude Pelon forcing a fumble that was recovered by Delvon Simmons.

Following practice, USC head coach Steve Sarkisian heaped plenty of praise upon Justin Wilcox’s group, which he believes is far ahead of where they were at this point last year.

“I think we’re much more aggressive,” Sarkisian said. “I think we’re making plays on the football a lot more in the back-half. We’ve seen them create turnovers [and] interceptions at a much better rate than a year ago at this time, and I think that’s just being confident – knowing the call, understanding the call, and then being able to play fast. That has definitely showed up.”

The offense came up with some highlight-reel plays of their own, with JuJu Smith and Steven Mitchell hauling in deep touchdown receptions late in the day, and with the team now taking a one-week break from spring practice before returning on March 24, Sarkisian appeared cautiously pleased with where his team is at right now.

“I think that it’s been competitive – it’s been good,” Sarkisian said. “I feel better this year than I did last year after six practices, but we don’t play for six months, so we’ve got a long way to go.”

The spring has always been a time when some of the younger, less experienced players start to gain notice, and two such players who caught everyone’s attention on Saturday were early-entrant freshman linebacker Cameron Smith and redshirt-freshman cornerback Lamont Simmons.

Smith, who is listed at 6-foot-3 and 240 pounds, has really asserted himself as of late, making two interceptions in as many workouts, and showcasing surprising athleticism in the process.

“He’s exactly what we were looking for,” Sarkisian said of Smith. “We wanted a big, physical middle linebacker – I think we got that. I think what he’s shown us is that he’s a better athlete than maybe we gave him credit for. He’s really good in the pass game. He’s able to get his hands on the football, he’s created some turnovers and then he’s physical when he rushes the passer up inside, so all in all Cam has had a good first two weeks.”

Simmons, who spent last season on the scout team, has looked much more comfortable in coverage this spring, and he made one of the plays of the day on Saturday when he picked off a Cody Kessler pass that was intended for Smith.

“He had a heck of an interception,” Sarkisian said. “Lamont is a guy who is a really cool fit if you want to play a lot of man-to-man, because he’s got length [and] he’s got speed. What we’re trying to get out of him, and what we’re starting to see more of is the assertiveness, the physicality, the confidence, and it showed today.”

– Ajene Harris was among those who did not practice. Sarkisian said that the sophomore receiver tweaked his hamstring on Thursday. Antwaun Woods (pectoral muscle), Greg Townsend, Chad Wheeler (knee) and Jabari Ruffin (knee) also did not practice due to injury. Tre Madden (toe) and Kenny Bigelow (knee) continue to be limited.

– Linebacker Quinton Powell and Offensive lineman Khalil Rodgers went home early for spring break and were not in attendance.

– Seymour had another strong showing. His interception came on a Kessler pass to Smith in the corner of the end zone, where he out-positioned the big wideout and leapt up for the pick. He also had a near-interception on a pass from Kessler to Christian Tober, as well as another pass breakup later in practice.

– Walk-on redshirt sophomore Connor Spears was another player lauded by Sarkisian following practice, with the USC head coach calling him a “good system fit” for the Trojans. With Bryce Dixon still out of action due to a student-conduct issue, Spears has served as one of just two available tight ends for the Trojans this spring. Once again, there was no update on Dixon concerning his status with the team.

– Chris Hawkins and Jonathan Lockett spent quite a bit of time running with the No. 1 offense at the same time at the two safety spots. Hawkins was very active on the day.

– The Oklahoma drill featured four blockers on four defenders, with one running back carrying the ball. There were plenty of big hits and physical match-ups during the period. Lamar Dawson did a great job of fighting through a Vainuku block on one rep to take down the ball carrier, Hawkins fought through a Smith block to make the stop on another, and Vainuku came up with a huge pancake block on Pelon.

– Kessler kicked off practice with a 10-yard completion over the middle to Mitchell.

– Kessler again went over the middle to Mitchell, this time for a gain of close to 20 yards.

– Adoree’ Jackson, at cornerback, stopped Justin Davis for no gain.

– Kessler went deep outside for Christian Tober, but Seymour was there, and he nearly picked off the pass but couldn’t hold on.

– Kessler hit Smith over the middle for a 20-yard touchdown.

– Max Browne’s pass attempt was batted down at the line by Cody Temple,

– Browne connected with Smith over the middle for 10 yards.

– Pelon fought through a block to strip James Toland IV, with Simmons making the recovery.

– Dawson stopped Toland for no gain.

– Kessler completed a pass to Darreus Rogers for a gain of over 35 yards with Jackson in coverage.

– Smith tackled Davis for a loss.

– Kessler hit Rogers with a quick pass outside, but Hawkins came up in a hurry to limit the play to no gain.

– Stefan Smith broke off a 40-yard run outside before Leon McQuay III forced him out of bounds.

– Pelon stopped Vainuku for a loss.

– Jackson stopped Vainuku for no gain.

– Jalen Greene connected with Mitchell for a gain of 20 yards before John Plattenburg made the stop.

– Kessler threw over the middle to Mitchell, but Cravens was there to pick it off.

– Browne threw outside to Whitney, but Seymour was there to break the pass up.

– Greene hit Smith over the middle for a gain of 10 yards,

– Kessler found a wide-open Mitchell over the middle for a 25-yard touchdown.

– Kessler threw for Smith in the corner of the end zone, but Seymour came up with the interception.

– Browne hit Spears for a gain of close to 20 yards.

– Dawson with great pursuit, stopped Toland for a loss.

– Kessler tried to hit Smith outside, but Simmons came up with the pick.

– Vainuku with another physical run, this time for close to 15 yards,

– Kessler hit Mitchell over the middle, then the speedy wideout made a great cutback move and took it to the house – 70-yard TD.

– Greene connected with Smith over the middle, and he broke a Jalen Jones tackle on his way to a 50-yard touchdown.

– Felix, Dawson and Co. stopped Davis short of the first down on the final play of the session-ending five-play period.