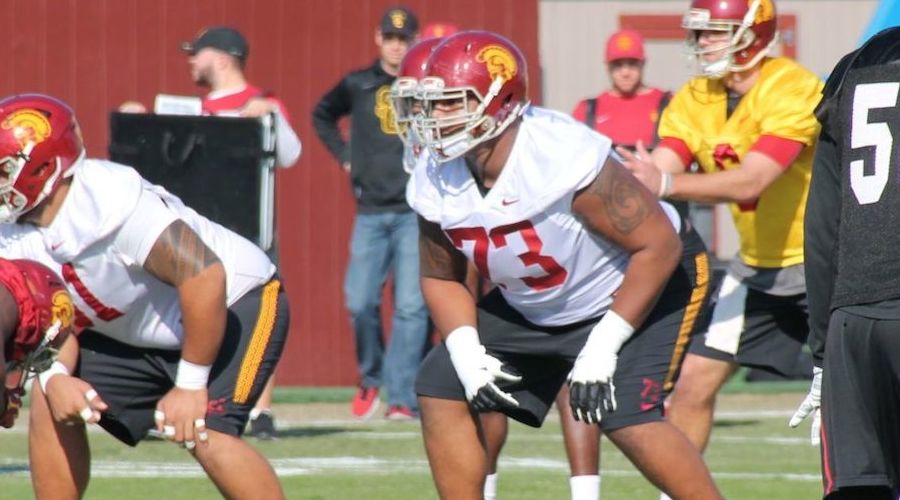 After two weeks away from action following their loss to Stanford on Dec. 5, the Trojans got back to work on Saturday, taking part in their first Holiday Bowl practice in preparation for their Dec. 30 matchup with Wisconsin.

Dressed in shorts and helmets, the team was in high spirits throughout the hour-and-a-half session, and there were also some key contributors back in the fold who have missed time in recent weeks.

“There’s a lot of things to be excited about,” Helton said. “One, to be back out after two weeks off, I’ve been bored to death. To be back out here on the field with the guys, and to see them really get fresh and healthy, and to see them bounce around is a lot of fun. And to see a couple of guys that we had lost really getting healthy again, like an Isaac Whitney (clavicle), to have him back. We really anticipate him having a chance to maybe play in this game. And Khaliel Rodgers (knee), to see him bouncing around with two more weeks of rest was really important for us.”

Senior quarterback Cody Kessler, who sprained his thumb in the Pac-12 title game, was out of his hand brace, and he made it through the entire practice without any problems.

Among those who were sidelined with injuries were linebacker John Houston Jr. (back) and safety Matt Lopes (foot), as well as tailback Tre Madden, who will not be available to play in the Holiday Bowl after undergoing knee surgery this past Monday.

“He’s had a sore knee that finally caught up with us,” Helton said. “He has a bright future at the next level, and it’s to the point now where it’s not healing up, and we wanted to get it healthy. So, he had a scope on Monday that was extremely successful. It got cleaned up. It was great to see his smiling face today. He was like, ‘Coach, this is the best I’ve felt in awhile.’ It was just to eliminate some pain that he’s had. He had some stuff in there that needed to get fixed up.”

“Chad is going through a personal issue today that we’re dealing with, and I’m going to leave it at that right now,” Helton said. “We’re sorting through it, and I hope you respect that.”

Having elevated Tee Martin from the role of wide receivers coach to offensive coordinator one day earlier, Helton discussed his reasons for the move following practice on Saturday.

“At the end of the day what I was looking for was a dynamic coach that can lead an offense, and believe in what I believe in – a guy that can be on the same page,” Helton said. “I’ve watched Tee Martin for four years now. I’ve watched how he’s been able to, one, organize the game plan and help me call plays. And just to know that, and know exactly what I’m getting, and know his talent level, why go anywhere else? In my opinion he’s the next big thing in college football.”

Helton revealed that Martin will begin calling offensive plays next season. For the Trojans’ matchup with Wisconsin, which features the nation’s No. 1 scoring defense, Helton will continue to handle those duties.

“I’m going to have a blast with it,” Helton said. “I’m hoping it’s the last one I’ll call in my life, so I’m really excited about that.”

More on coaching comings and goings

Saturday marked the first time that the Trojans hit Brian Kennedy-Howard Jones Field this season without former coaches Justin Wilcox, Chris Wilson, Bob Connelly and Keith Heyward – all four of whom were fired following the Trojans’ loss to Stanford.

To help fill the void, a number of assistants and graduate assistants have temporarily been moved or elevated to new roles for Bowl practices. Here is the run-down Helton gave following practice:

As far as when any permanent hires might occur for the long-term, particularly in regard to the defensive coordinator position, Helton said that he’s being extra cautious not to rush into any decisions.

In replying to a question regarding whether or not Sirmon and running backs coach Johnny Nansen will remain on following the bowl game, Helton said that he is hopeful they will.

“You know, they’re coaches that will be looked at by other places, but I want them here,” Helton said. “I want them to be a part of this thing. That’s been illustrated to them, and I hope that they stay around for us.”

– With Wheeler not on hand, Zach Banner slid over to left tackle with the No. 1 offense, with freshman Chuma Edoga taking reps at right tackle.

– It was interesting to see Sirmon spend a majority of the early individual period with the defensive backs, leaving Brown to handle the linebackers.

– Sophomore backup punter Chris Tilbey got a lot of work today, and he produced with some big punts, one of which was followed up by Helton yelling, “I hear you, Roo!” – Helton’s apparent nickname for the Australia native.

– In addition to a large group of parents, former USC defensive lineman Shaun Cody was among those in attendance.

With the team in shorts and helmets, and it being a lighter day in general, there aren’t quite as many highlight plays to report today.

– Kessler went deep along the sideline to JuJu Smith-Schuster, but Kevon Seymour was there to bat the ball away.

– Kessler completed a pass outside to Smith-Schuster, but Jackson stopped it for a short gain.

– Kessler hit Jalen Greene over the middle for a gain of close to 10 yards before Olajuwon Tucker made the stop.

– Kessler hit Greene outside for a gain of 10 yards before Isaiah Langley made the stop.

– Kessler hit Smiyth-Schuster over the middle for a gain of 10 or 11 yards.

– Kessler hit Smith-Schuster outside for a long gain.