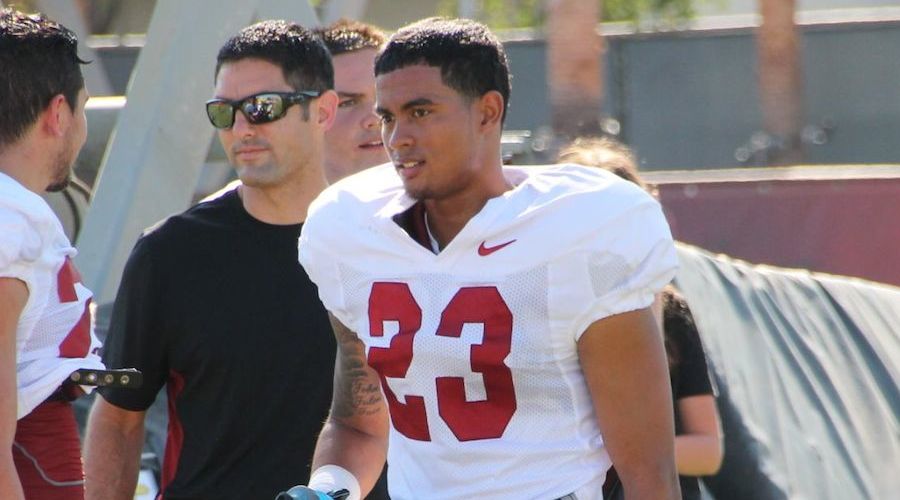 With the first scrimmage of fall camp coming up on Monday night, the Trojans were back out in the heat on Sunday, taking part in a shorts, shoulder pads and helmets practice session marked by plenty of energy, as well as some big plays on both sides of the ball.

“I thought their focus was good,” USC head coach Steve Sarkisian said. “Mentally, they were locked in with the practice coming tomorrow morning, and a big scrimmage tomorrow night. I thought, all in all, it was a positive practice on a lot of fronts.”

The two-and-a-half hour session ended on a dramatic note during the final five-play challenge, which had the offense going up against the defense in a two-point conversion scenario. Trailing 2-1, quarterback Cody Kessler tried to hit Steven Mitchell Jr. in the corner of the end zone, but sophomore cornerback Jonathan Lockett was there to make the interception, giving the defense the 3-1 victory.

“That was a great play,” Kessler said of Lockett’s interception. “It was a two-point conversion opportunity, so it was kind of one where I had to throw it. You know you’ve got to win, so I can’t hold onto it and take a sack. It was a tough play. I tried to put it over the top to try to get a chance for it, but Lockett was there. He’s having a great camp. He’s playing really well.”

Lockett, who also broke up a pass on an earlier play in the final challenge, went with the No. 1 defense at cornerback throughout a majority of practice in place of the injured Kevon Seymour. Continuing a string of solid play that he’s showcased though the first nine days of fall camp, he drew praise not only from Kessler on Sunday, but Sarkisian as well.

“I think Jonathan has been playing good football for us all camp,” Sarkisian said. “We probably had to play him a little too soon a year ago as a true freshman, but I think that was helpful for him. I think he gained some experience and confidence, and it’s showing now. He’s gotten a couple interceptions and he’s playing more confidently.”

As for Seymour, who banged his left knee on Saturday, the senior cornerback wore a brace on his leg on Sunday, but he did suit up and participate in some early drills.

“Kevon, he was a little limited today as we kind of knew he would be, but again, it’s not serious,” Sarkisian said. “It’s going to take probably a few days to get him back to full-strength. He did all of the individuals, he did some of the special teams drills, so we’ll get him back.”

“Ricky Town has decided to transfer,” Sarkisian said. “We wish him the best of luck. He’s worked extremely hard. He’s been a great member of our program, and I’m sure wherever he decides to go, he’ll be a good member of that program as well.”

Town, who arrived at USC last January from Ventura (Calif.) St. Bonaventure, had been splitting reps with fellow freshman Sam Darnold behind Kessler and Max Browne.

By leaving USC now, before the fall semester has started, Town will be able to redshirt the 2015 season at the school he decides to attend, and be eligible to play in 2016.

The Trojans are now down to three scholarship signal-callers, but Sarkisian believes that the team is still in solid shape at the position, and he doesn’t foresee Jalen Greene, who has been lining up at wide receiver during fall camp, moving back to his original quarterback spot.

“He’s doing really well at wideout right now, and he’s helping us,” Sarkisian said. “I think all this really does is give Sam more reps. Obviously, we’re really pleased with what Cody is doing, and with what Max is doing, and now Sam gets more reps. If we go through three quarterbacks in one year, we’d be in trouble at any level.”

Sidelined since the second day of fall camp with a hamstring injury, junior tailback Justin Davis returned to action on Sunday. Showing no ill affects from his injury, he took a limited number of reps during the team periods and appeared to be moving well.

“It was good to have Justin Davis back out here today,” Sarkisian said. “He’s working himself back into the team settings and different things, and I thought he showed some flashes.”

– Noah Jefferson (elbow) and Viane Talamaivao (hamstring) did not participate in practice, although Sarkisian did say that Talamaivao was close to making a return.

– Starting nose tackle Antwaun Woods went to the sideline midway through practice and did not participate in the last half of the workout. He was spotted with ice on his left shoulder. With Woods sidelined, Cody Temple took reps with the No. 1 group at nose tackle.

– With Talamaivao still sidelined, the Trojans featured a starting offensive line early on that had Chad Wheeler at LT, Damien Mama at LG, Max Tuerk at C, Toa Lobendahn at RG and Zach Banner at RT. Lobendahn also took extensive reps with the No. 1 group at LT, with both Chris Brown and Nico Falah taking snaps at RG.

– With Seymour still extremely limited, Chris Hawkins saw some brief time at cornerback, but still spent the majority of the day back at safety.

– During a late long distance field goal period Matt Boermeester connected on 2 of 4 attempts, while Alex Wood connected on 4 of 5 attempts. Sarkisian said after practice that they’re working with Boermeester on becoming more consistent.

– Among those in attendance on Sunday were scouts from the Cleveland Browns, San Francisco 49ers and St. Louis Rams.

– Kessler connected with JuJu Smith-Schuster outside for a gain of 12 or 13 yards.

– Tre Madden followed Tuerk and Mama for a gain of seven yards.

– J. Davis ran outside for a gain of five or six yards.

– Max Browne hit Robby Kolanz over the middle for a short touchdown.

– Darnold hit Jahleel Pinner with a quick pass, and Pinner ran down the sideline for a gain of close to 10 yards before being pushed out-of-bounds.

– Darnold couldn’t find anyone, and he scrambled for a gain of around five yards.

– Aca’Cedric Ware made a nice cut and picked up around eight yards.

– Kessler hit Smith-Schuster over the middle for 15 yards.

– Madden ran off tackle for a gain of around seven yards.

– Darnold connected with Burnett down the sideline for a gain of around 35 yards with Isaiah Langley in coverage.

– Darnold went outside to Caleb Wilson, who sprinted down the sideline for a gain of 25 yards.

– Kessler hit Smith-Schuster over the middle for 12 or 13 yards before Leon McQuay III made the stop.

– Browne connected with Isaac Whitney for a gain of 10 yards before Hawkins made the stop.

– Kessler hit Mitchell over the middle for 15 yards before Marvell Tell made the stop.

– Kessler hit Smith-Schuster outside for a pickup of close to 10 yards.

– Kessler hit Mitchell over the middle for a gain of around 20 yards before Matt Lops made the stop.

– Kessler tried to hit Darreus Rogers over the middle, but Hawkins got a hand up and deflected the pass.

– Browne threw deep, and George Katrib made a beautiful diving grab along the sideline for a gain of around 40 yards.

– Browne connected with Robby Kolanz outside for 10 yards.

– Kessler hit Connor Spear outside for a gain of eight or nine yards.

– Smith-Schuster made a diving catch outside with Iman Marshall in coverage on a pass thrown by Kessler.

– Davis made a nice cut, bounced outside and picked up close to 15 yards.

– Kessler hit Ronald Jones II with a quick pass, and Jones weaved his way for a gain of over 10 yards.

– Kessler hit Mitchell along the sideline for a gain of 35 or 40 yards.

– Darnold connected deep with Burnett down the sideline for a gain of around 40 yards.

– On the first play of the final five-play challenge, in a two-point conversion scenario, Kessler hit Dominic Davis, who ran into the corner of the end zone for a score.

– Kessler tried to connect with Mitchell, but Lockett deflected the pass.

– Lockett picked off the Kessler pass into the corner of the end zone.