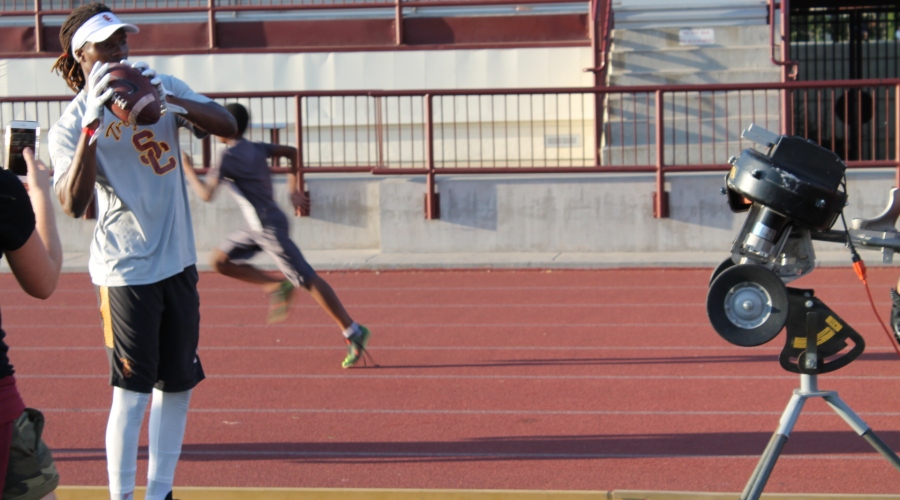 I continue to be impressed by the number of players showing up for these workouts, it may not be a full squad every time but there are consistently 50-60 guys at each session.

* Two nice interceptions today on defense. Lamar Dawson had another one, that’s his 3rd or 4th of the summer, and Malik Dorton added one at the line where he got his paw up on a Sam Darnold pass at the line and brought it in right away. Iman Marshall had a chance at a pick when he undercut Isaac Whitney but he couldn’t hang on to the ball.

* Whitney continues to shine. There were several sideline grabs where he is showing very good hands and coordination to stay in bounds. Isaac was one of several players who stayed afterwards to get work on the jugs machine but he stood notably closer than everyone else to the machine. Today was Isaac’s birthday and his teammates reminded him of that after every catch. I thought De’Quan Hampton was solid today as well. Hampton is a really big guy and moves well.

* Cyrus Hobbi caught a pass down the right sideline and took it for a long gain, the linemen were working out in the end zone and Damien Mama went to give Cyrus a celebratory leap bump but Cyrus pulled off and went back to the huddle.

* Jahleel Pinner had back to back plays, a quick pop up the middle and then a swing pass in the flat.

* Dominic Davis is one fast dude.

* Justin Davis caught a pass in the flat and put a move on Marvell Tell, who received a veteran pat on the shoulder after the play from Kevon Seymour.

* Adoree’ Jackson was in attendance but did not take part although he was very active as a spectator on each play.

* Marshall spent a lot of time during the practice getting advice from Su’a Cravens on how to maintain his speed when coming up to make a tackle in the open field, rather than slowing down as you arrive as many players do in high school.