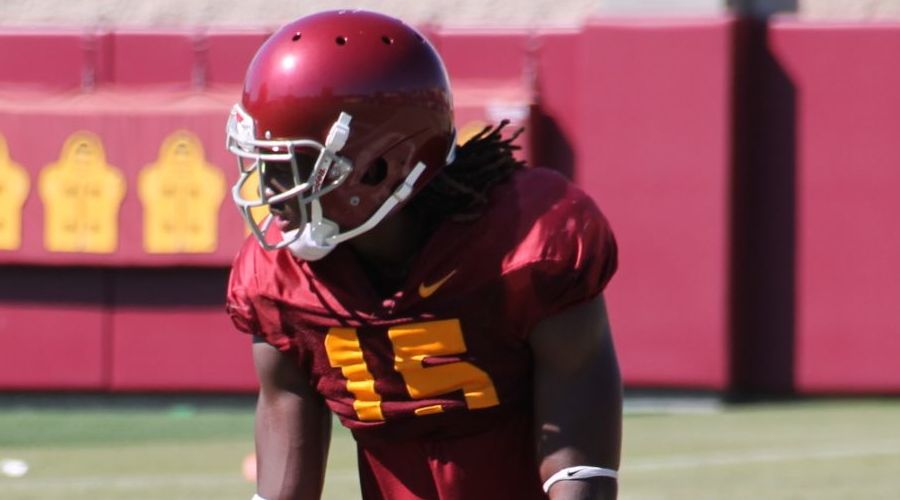 With Brian Kennedy-Howard Jones Field still on the muddy side following this past weekend’s rain storm, the Trojans were back on Cromwell Field for the second consecutive day on Monday as they continued preparations for their Dec. 30 matchup with Wisconsin in the Holiday Bowl.

Working out in shorts, shoulder pads and helmets, the team participated in a two-hour practice session that was marked by plenty of speed and standout plays – particularly on the part of Adoree’ Jackson, who made his presence felt in all three phases of the game.

The renewed energy that Clay Helton’s team has showcased over the past few days is something that the USC head coach credits to the time off that they received following the Pac-12 championship game loss to Stanford on Dec. 5.

“To have that good Pac-12 championship experience with those practices, really get a good 12 to 14 days off there, their legs came back fresh,” Helton said. “They’re feeling healthy. Adoree’ is as fast as I’ve ever seen him right now, so I think there’s just some fresh-leggedness going on.”

Jackson was particularly impressive during an early special teams period where he had an explosive kickoff return for a big gain, before making a behind-the-back catch on a punt return a little later.

One day after suffering an apparent ankle injury that forced him to miss the last thirty minutes of practice, Khaliel Rodgers returned to action on Monday, spending much of the day with the No. 1 offense at his normal center spot.

Nico Falah, who filled in as the starting center for Rodgers against Stanford, also saw time with the ones, lining up with the group throughout the final 11-on-11 period.

While Rodgers’ return provided a boost to the offensive line, the defensive backfield took a hit as veteran senior cornerback Kevon Seymour went down with an ankle injury that forced him to miss the last half of practice. Following the workout, however, Helton said that he did not believe the injury to be serious.

“I don’t think it’s going to hold him out of the game,” Helton said. “He got caught up in the turf a little bit and tweaked it, so we held him just for preventative measures.”

Whitney on pace to play vs. Wisconsin

Having missed the last eight games for the Trojans due to a broken clavicle, redshirt junior wide receiver Isaac Whitney returned to work this past weekend, and according to Helton, all signs point to him participating in the Holiday Bowl.

“Everything from the MRI and X-Rays looks great with that bone that healed, but you never know how he’ll feel until he gets banged around,” Helton said. “We’ve had two days of good banging, and he’s really come out well. We’ll re-evaluate it tomorrow, but I anticipate him helping us in this game.”

Whitney caught eight passes for 112 yards and two touchdowns through the first five games of the season.

Harris rounding back to form

Another player who has gotten back in the flow of things is wide receiver Ajene Harris, currently in the midst of a redshirt year after undergoing offseason hip surgery.

The Los Angeles (Calif.) Crenshaw product took his first full contact reps of the season on Sunday during an 11-on-11 period, and he did so again on Monday, making at least two receptions while running with the No. 2 group.

“This is the first week that he’s really been cleared to practice,” Helton said. “He obviously won’t play in this game – we’re not going to burn a redshirt year – but to see him back out here, and the explosiveness and maturity of his game that he brings, I’m excited about it.”

– USC president Max Nikias was among those in attendance. He spent time talking to Helton following practice.

– Chad Wheeler was not in attendance for the third consecutive day following an altercation on Saturday that reportedly led to him being held for evaluation. Helton said that he has not spoken to him since the incident took place.

– The play of the day took place during a late 11-on-11 period when Cody Kessler hit a wide-open Steven Mitchell down the middle of the field, and about ten yards before the goal line he flipped the ball to JuJu Smith-Schuster, who took it in the rest of the way for a touchdown.

– Freshman linebacker Osa Masina had the hit of the day, drilling Aca’Cedric Ware in the flat following a catch for a short gain.

– Following practice Helton said that he’s been impressed with the way that tight end Caleb Wilson has handled himself throughout his freshman campaign, particularly in the wake of the firing of his father, Chris Wilson, as defensive line coach at USC.

“He’s doing great,” Helton said. “What an unbelievable kid – everything that he’s done from a service team standpoint, and just as a teammate. The type of kid that he is, and the type of family that he comes from, I have a great appreciation in my heart – being a coach’s son also, and the endeavors that you have to go through. He’s handled it with class and style, and he’s really helped our football team this fall.”

– Cody Kessler hit Smith-Schuster for a gain of 20 yards before Jackson made the stop.

– Kessler connected with Deontay Burnett outside for a gain of close to 10 yards.

– Kessler hit Darreus Rogers for a gain of 10 yards before Isaiah Langley made the stop.

– Kessler hit Burnett over the middle for a gain of 20 yards.

– Kessler connected with Whitney outside for a gain of almost 30 yards.

– Kessler hit Burnett over the middle for a gain of 13 or 14 yards before Jackson made the stop.

– Max Browne went deep to Robby Kolanz along the sideline, but Iman Marshall broke up the pass.

– Browne hit Wilson over the middle for a gain of around 10 yards.

– Don Hill tipped Kessler’s pass at the line and it fell incomplete.

– Kessler hit Smith-Schuster over the middle for a gain of 10 yards.

– Browne hit Harris over the middle for a gain of close to 15 yards.

– Browne hit Harris over the middle for a gain of 10 yards.

– Browne connected with Wilson outside for a gain of 20 yards before Leon McQuay III made the stop.