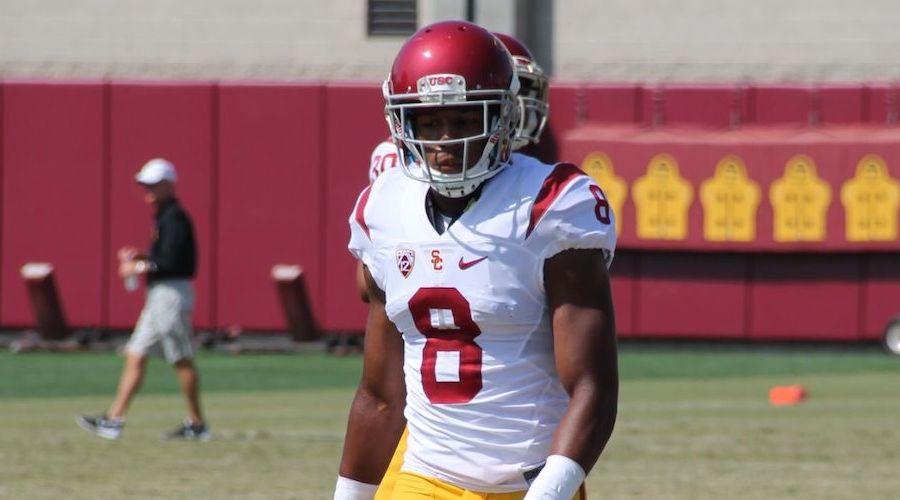 After a pair of weekend workouts that began a little later in the day than usual, the Trojans went back to their early-morning schedule on Monday, taking part in a shorts-and-shoulder pads practice in preparation for their upcoming matchup with Washington on Thursday night.

“It was good to kind of get back to our normal routine of being out here early in the morning,” said USC head coach Steve Sarkisian. “ It was a very spirited practice. A lot of game plan work, and I thought the guys came out focused. It’s going to be really key that we have good meetings this evening to really polish things up so that we come out tomorrow morning, and really clean this game plan up so that we’re right on point with what we’re doing.”

Thursday’s game will mark the first time that Sarkisian has faced Washington, where he served as the head coach from 2009 to 2013, since he took the reins at USC. Having recruited over half the players on the Huskies roster, it’s safe to say that both teams will be more than just a little familiar with one another when they square off in the Coliseum, but Sarkisian doesn’t believe that will give either team an advantage.

“We’re going to run our stuff every week just like any other week,” Sarkisian said. “We have wrinkles that we like to do. We try to game plan our opponent. They’re going to try to do the same. That’s part of football, so I don’t know if there’s necessarily an advantage either way, but there are a lot of similarities between the two teams when it comes to schematics. But at the end of the day it’s about preparing and it’s about execution.”

Defensive lineman Claude Pelon went down during a service team period with what Sarkisian said he believes is a right ankle sprain. Pelon was later carted off the field.

“We’re going to get X-rays and whatnot, so I’ll have more for you guys tomorrow,” Sarkisian said. “We’ll see how he bounces back.”

Pelon, who missed the Trojans’ season-opener against Arkansas State due to a knee injury, has been lining up as a reserve nose tackle in recent weeks, and he started at the position against Arizona State in place of Antwaun Woods (pectoral muscle).

Woods returned to action this weekend and immediately stepped back into his role as the starter.

Pelon had four tackles including one tackle-for-loss against the Sun Devils.

– Cornerback Kevon Seymour, who missed the Trojans’ last two games with a knee injury, made it through the entire practice session for a second consecutive day, and Sarkisian said that he believes he will play against Washington.

– Sarkisian was less optimistic about wide receiver Darreus Rogers (hamstring), who took part in some individual drills on Monday.

– John Houston Jr. did not participate in practice due to a sore back.

Arriving at USC this past summer as one of the most highly touted members of the Trojans’ most recent signing class, freshman cornerback Iman “Biggie” Marshall has lived up to the hype so far. A starter in each of the Trojans’ last two games, he’s currently No. 3 on the team with 17 tackles, while also recording two pass break-ups.

Perhaps even more impressive than Marshall’s performance, however, has been the work ethic that he has put on display on Brian Kennedy-Howard Jones Field during the week. Spending extra time after practice working on his technique, he was among the last players to leave the field on Monday, just as he has been seemingly every day.

“It’s just a sign of a guy that wants to be great,” Sarkisian said. “He’s not satisfied with where he’s at yet. He’s a heck of a player for a true freshman, but he wants to be special, he wants to be great and he works at his craft. You can’t fault a guy for that. There is a fine line with over-working yourself, but there have been a lot of guys who have spent extra hours on this field that have gone on to do great things, and I think Biggie want to fall in line with those guys.”

– Khaliel Rodgers returned to practice after missing time due to “personal reasons,” and he jumped back in with the No. 2 offensive group at center. That allowed Toa Lobendahn – who had been manning that spot in recent days – to move back to his normal right guard position with the No. 1 unit, with Viane Talamaivao moving back to the No. 2 offense at right guard.

– Adoree’ Jackson, once again, spent time on defense and offense, and he shined on both sides of the ball. During an early one-on-one coverage drill he made a fantastic leaping one-handed interception. He also hauled in a 40-yard touchdown pass during one 11-on-11 period.

– Tre Madden again had a very light day of work, with Justin Davis taking the bulk of the snaps with the ones.

– Placekickers Alex Wood and Matt Boermeester both went 2–for-2 during a late field goal period, with the longest attempt being from somewhere in the 45-yard neighborhood.

– Cody Kessler hit JuJu Smith-Schuster outside for a gain of 15 yards.

– Kessler again went to Smith-Schuster, this time over the middle for a gain of around 10 yards.

– Max Browne tried to hit Robby Kolanz outside, but Isaiah Langley was there to break up the pass.

– Kessler hit Steven Mitchell outside for a gain of eight or nine yards before Chris Hawkins made the stop.

– Kessler hit Dominic Davis outside for a short gain before Osa Masina made the stop.

– Kessler tried to connect with Smith-Schuster over the middle, but Jackson reached

out and deflected the pass away.

– Kessler connected with Jalen Greene over the middle for a gain of 12 or 13 yards before Anthony Sarao made the stop.

– Browne tried to hit Greene outside, but Langley broke up the pass.

– Browne connected with Greene for a gain of 25 yards.

– Browne hit Mitchell over the middle for a gain of over 10 yards.

– Kessler connected with Jackson deep over the middle for a 40-yard gain.

– James Toland IV made a great cutback and found some daylight for a 25-yard gain before Marshall made the stop.