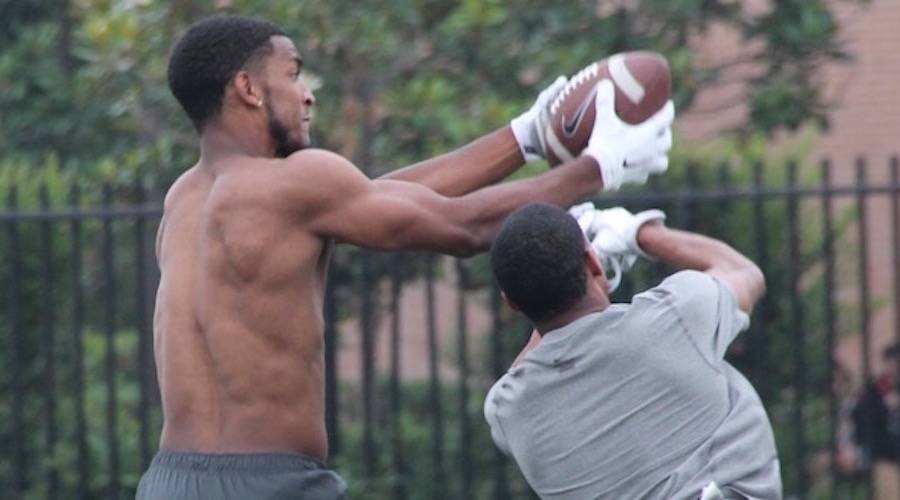 t was the best throwing session we’ve seen this summer with plenty of highlight plays.

Tyler Vaughns got things started by reaching up high with his long arms to bring in a Sam Darnold pass along the sideline.

Osa Masina got in the passing lane and knocked down a Max Browne attempt to Tyler Petite.

Darreus Rogers used his big hands to snatch a low thrown pass across the middle. Darreus is looking every bit the experienced senior right now.

Darnold went deep to Michael Pittman along the right sideline and Michael made a terrific catch by extending as far as he could while keeping his stride.

Chad Wheeler was in attendance for the first time since the opening week of summer workouts, and he was back in place at LT.

Rogers made one of the highlight catches of the day with a one-handed grab against double coverage on a fade against Langley and Plattenburg.

Jackie Jones took some reps as a slot receiver and had a catch, but he was still lined up primarily on defense.

Jordan Austin took back-up reps at center, it was the first time we’ve seen him get a look there.

Vaughns went up to get a jump ball over Langley, Tyler is very good with the ball in the air in those situations.

Steven Mitchell had several catches late in the day.

Darnold made a terrific back shoulder throw to Greene against Jones for the completion.

Langley had a pretty pass break-up on a deep pass to Rogers.

Darnold hit Isaac Whitney deep for the final big play of the day.

Quinton Powell did not take part, he was on the sideline with a boot on his foot.