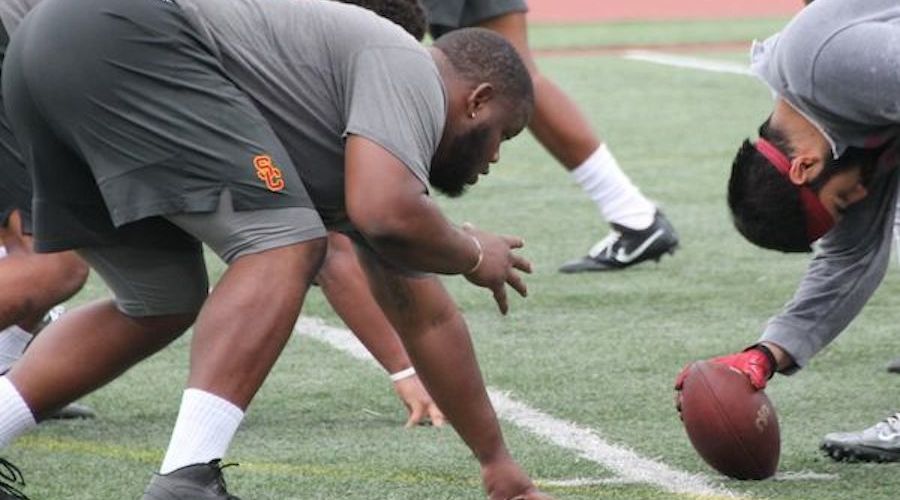 There were some new faces along the Trojan defensive line this morning in the player run workout as not only did incoming JC transfer Josh Fatu show up for the first time but Khaliel Rodgers (photo above) also flipped over from center to take some reps on defense. Rodgers said it was his idea to approach the coaches about helping out on defense, it’s just not clear yet if he will be staying there or not. Utah grad transfer Steve Tu’ikolovatu was also in attendance, as were former defensive linemen Antwaun Woods, Claude Pelon and Scott Felix.

* Soma Vainuku was there and could be seen talking with current fullback Reuben Peters.

* Trevon Sidney made a nice one-handed grab early in warm-ups.

* Sam Darnold hit Isaac Whitney deep on a play where John Plattenburg tripped and went to the ground in coverage.

* Darnold was picked on the final play of 7-on-7 by Jackie Jones on a pass intended for Trevon Sidney.

* On the opening play of full 11-on-11 team drills, Max Browne hit Justin Davis in the left flat and Marvell Tell came up to make the play, the two hit pretty hard, Tell went to the ground with trainers looking at his face/nose, while Davis went off to the side for a few minutes to compose himself. Davis ended up going back in later but Tell left the field and was done for the day.

* Isaiah Langley broke up a pass intended for Jalen Greene.