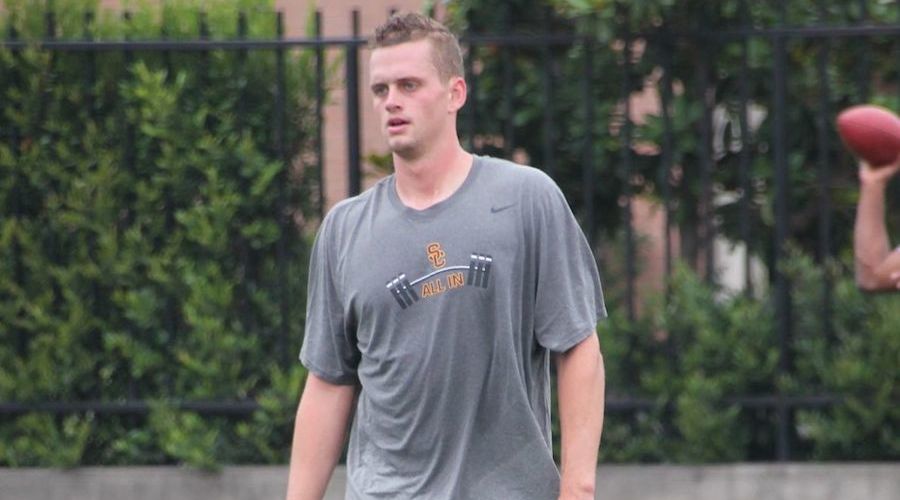 With fall camp set to start up in six days, the Trojans held their final player-run practice of the summer on Friday morning. Here are some notes and highlights from the workout:

* Adoree’ Jackson was in attendance, although he did not participate in the practice. He did, however, appear to take part in an individual workout prior to practice on Brian Kennedy-Howard Jones Field. Following the player-run practice on Cromwell Field he showed that he’s definitely ready for camp, pulling off a triple backflip, with a number of his teammates – including Deontay Burnett and Keyshawn “Pie” Young – also showing off their acrobatic skills.

* Max Browne kicked off the session by completing three consecutive passes to De’Quan Hampton in the initial 7-on-7 period.

* Browne then hit Daniel Imatorbhebhe – who made a great leaping catch over Matt Lopes – for a 20-yard touchdown.

* Browne went deep to Tyler Vaughns along the sideline with Ajene Harris in coverage, with the young freshman doing his best to make a fantastic leaping grab, but it was too close to call as to whether or not he got one foot inbounds. It was a terrific effort either way.

* Chris Hawkins came up with the play of the day on defense, picking off a quick Matt Fink pass over the middle that was intended for Trevon Sidney, and taking it to the house.

* Sidney showed off his speed on one play, taking a quick pass outside and sprinting past C.J. Pollard for a big gain.

* Another freshman wideout, Velus Jones, had his most active day of the summer, pulling down at least three passes.

* JuJu Smith-Schuster caught a deep pass over Jack Jones early in practice. Later on, however, Jones got a little revenge, deflecting a deep ball intended for the veteran along the sideline.

* The No. 1 offensive line group to start the session featured Chad Wheeler at LT, Chris Brown at LG, Toa Lobendahn at C, Jordan Simmons at RG and Zach Banner at RT. Nico Falah saw significant time with the No. 1 group at center, and Viane Talamaivao also rotated in at right guard. Damien Mama was not in attendance.

* Prior to practice, freshman safety Jamel Cook was spotted out of his scooter, and walking without a boot on his foot.