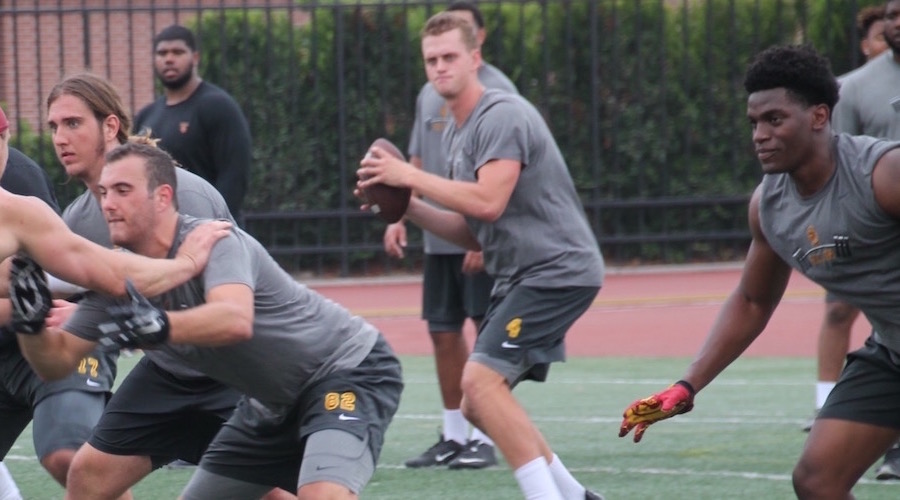 Some quick notes and observations from Friday’s throwing session on campus:

* Freshman Keyshawn “Pie” Young was outstanding in the early 7-on-7 period, breaking up a total of three passes – all thrown by Sam Darnold.. The first came on a pass intended for De’Quan Hampton outside. One the very next play Young broke up a deep pass along the sideline intended for Isaac Whitney. Then, a little later Young got in front of Jalen Greene along the sideline to break up another pass.

* When the 11-on-11 period began, the first-team offensive line consisted of Chad Wheeler at LT, Chris Brown at LG, Toa Lobendahn at C, Viane Talamaivao at RG and Zach Banner at RT. Nico Falah also took reps with the No. 1 group at center over the course of the workout.

* Tailback Dominic Davis took a quick pass outside from Max Browne, showing off his explosiveness as he made a nice cutback move and found daylight.

* It looked like both Tyler Petite and Daniel Imatorbhebhe were absent today, so Taylor McNamara and Cary Angeline split reps at tight end. Angeline made a couple nice grabs, including one reaching catch over the middle on a pass from Darnold.

* Darnold hit De’Quan Hampton with a deep pass down the middle over Ajene Harris.

* Trevon Sidney had an excellent day, making a deep one-handed grab along the sideline on a pass from Browne. Staying after practice to get some some one-on-one work in with a group that included Browne, Darnold, JuJu Smith-Schuster, Deontay Burnett, Isaiah Langley and Jack Jones, Sidney put on an impressive display, making a number of highlight-reel grabs, including another dazzling deep one-handed catch with Langley in coverage.

* Smith-Schuster also had his fair share of wins in the one-on-one battles, including one against fellow Long Beach Poly Alum Jack Jones, where he outmuscled the young freshman to get position before leaping to make the catch.

* Langley came up with a circus catch for an interception on a pass that both he and Smith-Schuster had their hands on.

* Jones took reps on both offense and defense during the one-on-ones.