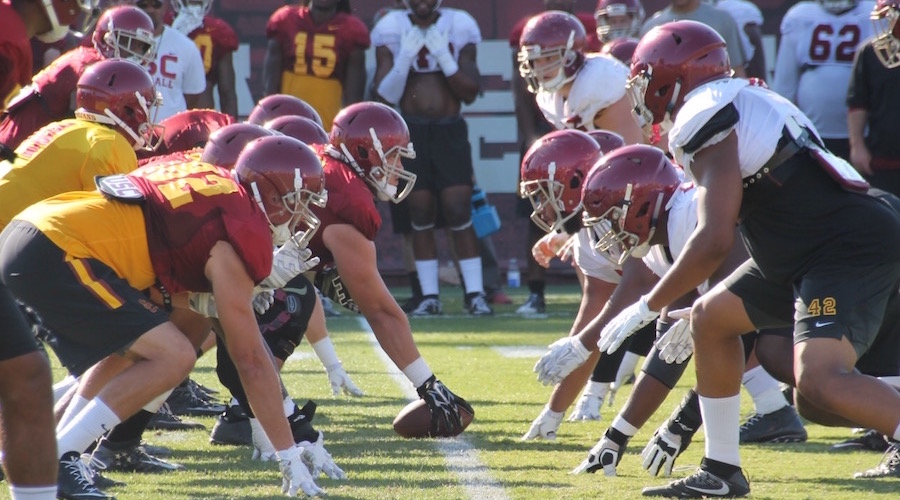 The Trojans capped off fall camp on Friday with a highly anticipated scrimmage on Brian Kennedy-Howard Jones Field, and it’s safe to say that all eyes were focused on the quarterback position, where Max Browne and Sam Darnold have been competing for the starting job since this past spring.

With Clay Helton set to announce the winner of the heated battle on Saturday, Friday’s scrimmage marked the final opportunity for both passers to make a lasting impression on the Trojans head coach.

For his part, Browne had an extremely solid day, completing 13 of 22 passes with touchdown tosses to Isaac Whitney and Tyler Petite. The redshirt-junior also directed another drive that was capped off by an eight-yard touchdown run by Ronald Jones II.

Darnold, meanwhile, got off to a slower start, but he closed the session out strong, completing all five of his passes during a final two-minute period, including a 10-yard touchdown pass over the middle to Daniel Imatorbhebhe. Darnold’s final unofficial line had him completing 10 of 19 passes with the one scoring toss.

Neither quarterback threw an interception on Saturday.

“It was good to see both guys in this atmosphere with some pressures on the line, and Max did a very nice job coming out and really spreading the ball around, not making critical errors, and he did a nice job,” Helton said. “Both quarterbacks, I thought, found the tight end extremely well. Two tight end-touchdown passes today, so I thought they did some good things from the naked eye. I look forward to going to study it tonight and tomorrow.”

Helton plans to consult with the different members of his coaching staff before making his choice. It’s a decision that figures to be extremely difficult, not only because of how close the race has been, but because of the relationship that Helton – the former quarterback coach and offensive coordinator at USC – holds with the two passers.

“It’s rare when you recruit them yourself, when you’re the quarterback coach, and you sit in their homes, you raise them, and then you have to be able to tell them, ‘this is where we’re at, and this is your role on the team.’ It’s extremely hard, especially when guys compete as hard as they did in both camps.”

Once Helton’s decision is made, however, it will be final, and he reiterated that he will not rotate the two quarterbacks into games.

“To go back-and-forth, it’s really, really hard to get in a rhythm,” Helton said. “I’m going to name one and allow that guy to be the guy, and let him move our football team. I’ve always thought that you give the opportunity to the quarterback to show what he can do, and hopefully that’s multiple games, hopefully it’s seasons to be honest with you. That’s what I’m hoping for. That’s usually when things are going good. But I never want a guy to be looking over his back all the time like, ‘oh, this series, if I don’t do good, I’m out.’”

– No injury report was given, but among those who did not appear to take part in the scrimmage were Jamel Cook (foot), Isaiah Langley (concussion), John Plattenburg (concussion), Kevin Scott (hamstring), Marvell Tell (hamstring) and Chad Wheeler (plantar fasciitis).

– Inside linebacker Cameron Smith also did not participate, but that appeared to be for precautionary reasons. He was suited up and was moving around fine. JuJU Smith-Schuster and Damien Mama only participated briefly.

– Defensive lineman Noah Jefferson participated in the scrimmage, lining up with the No. 1 group at defensive tackle at times – including to start the day.

– Helton said that the team suffered no new injuries during the scrimmage.

– The No. 1 offense to begin the day had Browne at QB, Justin Davis at RB, JuJu Smith-Schuster at WR, Steven Mitchell Jr. at WR, Darreus Rogers at WR, Taylor McNamara at TE, Chuma Edoga at LT, Chris Brown at LG, Toa Lobendahn at C, Viane Talamaivao at RG and Zach Banner at RT.

– The No. 1 defense to start the day with Jefferson at DT, Stevie Tu’ikolovatu at N, Malik Dorton at DT, Uchenna Nwosu at SAM OLB, Porter Gustin at Predator OLB, Michael Hutchings at WILL, Olajuwon Tucker at MIKE, Chris Hawkins at S, Leon McQuay III at S, Adoree’ Jackson at CB and Iman Marshall at CB.

– When the No. 1 defense was in a nickel alignment Dorton came out, while Matt Lopes came in at safety, and McQuay covered the slot.

– Freshman Jordan Iosefa ran exclusively at MIKE linebacker for the second consecutive day, lining up with the No. 2 defense at times.

– Jabari Ruffin ran with the No. 2 defense at outside linebacker. He was extremely active, coming up with at least two sacks as well as a tackle-for-loss.

– During a kickoff period Matt Boermeester booted a couple kicks deep into the end zone.

– Browne hit Rogers outside for a gain of 7 or 8 yards.

– J. Davis ran outside for a short gain before Jefferson made the stop.

– Davis ran between Mama and Edoga and found daylight for a gain of 30-plus-yards.

– Browne hit Deontay Burnett outside for a short gain.

– Darnold hit Trevon Sidney over the middle, but Jonathan Lockett popped the ball loose and the pass fell incomplete.

– Darnold hit Jalen Greene outside for a gain of over 10 yards.

– Darnold hit D. Davis outside for a gain of around 5 yards.

– Browne hit Josh Imatorbhebhe for a gain of close to 25 yards.

– Browne hit Whitney in the corner of the end zone for a 35-yard TD with Jack Jones in coverage.

– Browne hit Tyler Vaughns over the middle for a short gain.

– R. Jones ran outside for a gain of 6 yards before Ajene Harris made the stop.

– Browne tried to hit McNamara, but Harris deflected it.

– Browne hit McNamara outside for a gain of 6 or 7 yards.

– Browne hit Tyler Petite in the back of the end zone for a 10-yard TD.

– Darnold hit McNamara over the middle for a gain of a little over 10 yards.

– Osa Masina and others put pressure on Darnold, and he threw an incomplete pass.

– Powell stopped Ware for no gain.

– Browne hit Pittman outside for a gain of 6 or 7 yards.

– Browne hit Petite outside for a gain of 15 yards.

– Browne hit Burnett outside for a gain of around 5 yards.

– Browne hit Vaughns outside for a gain of around 13 yards.

– Darnold hit Whitney outside for 5 yards.

– Darnold hit Whitney outside for 6 yards.

– Darnold hit Whitney outside for close to 10 yards.

– Darnold hit Ware outside for 6 or 7 yards.

– Darnold took off running and picked up a gain of around 10 yards or so.