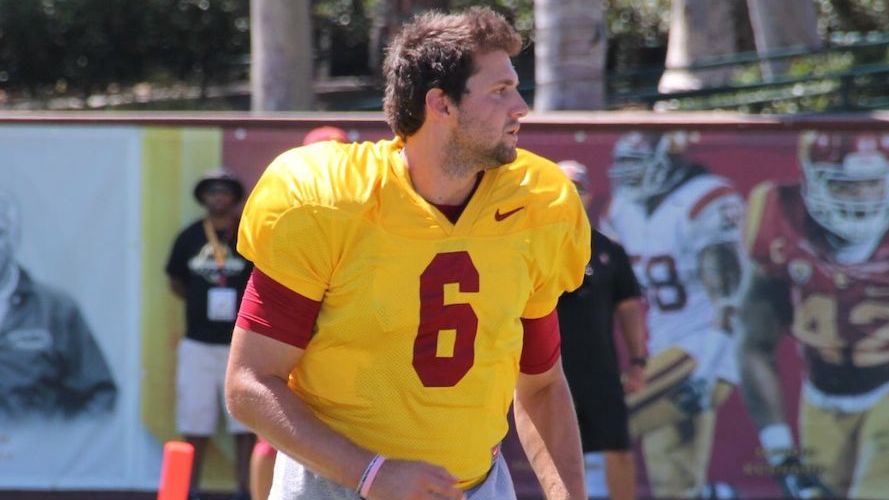 The Trojans were back out on Brian Kennedy-Howard Jones Field on Friday, taking part in a full-pads practice session, and returning to action with the team after a day away due to grad-school orientation was quarterback Cody Kessler, tight end Taylor McNamara and linebacker Anthony Sarao.

Ironically, all three players came up with big-time performances on their first day back.

Sarao returned an interception for a score while Kessler completed passes all over the field, with one of his favorite targets being McNamara, who, with Connor Spears sidelined with an undisclosed injury, was the primary tight end with the No. 1 offense.

It was Kessler and McNamara who hooked up on the last two plays of the day during the final five-play challenge, which featured the offense going up against the defense in a two-point conversion scenario. With the score tied 1-1, Kessler first hit McNamara in the corner of the end zone, before finding him in the back of the end zone on the next play for another touchdown, giving the offense a 3-1 victory.

McNamara, who had arguably his best performance since arriving at USC as graduate transfer, has been taking more and more reps with the No. 1 offense over the last four days.

“He probably, in my opinion, made the biggest improvement this camp,” Kessler said of McNamara. “From where he was on Day 1, to learning the offense, to knowing where to line up, to making the two last plays there at the end to win us the competition period, he’s come a long way. And it’s been cool, especially with our tight end situation – how confusing it is, and the difficulty we had kind of filling those spots. He’s stepped right in.”

As for Kessler, he said that the day away from practice on Thursday wasn’t exactly easy to handle, but that he does see the positives associated with it, which include him giving his arm a much-needed break, as well as the experience it provided Max Browne and Sam Darnold with.

“I definitely benefited from it, but I think the offense benefitted from it,” Kessler said. “Coach Sark made the point, ‘Knock on wood it doesn’t happen, if you’re not there for a game, or something happens, we can’t tell the future so we need the offense getting used to someone else being at quarterback, whether it’s Max or Sam or whoever else is in there.’ I think it helped out. I think it was good for them. But did it kill me not being there? Absolutely.”

Another big day for Jackson

He didn’t kick any field goals on Friday, like he did one day earlier, but Adoree’ Jackson did manage to put on quite a show, once again.

Starting his day off with a kickoff return for a touchdown that featured some electrifying jukes and cuts, he lined up all over the field on offense, scoring one touchdown on the ground, while also making a number of highlight-reel catches, including a leaping 20-yard touchdown grab between Leon McQuay III and Chris Hawkins that caught everyone’s attention.

Following practice, Jackson, who spent the first 11 workouts of camp at cornerback, was hypothetically asked if he thought that he would ever get tired if he was asked to take every rep on offense, defense and special teams during the course of a game.

“If I would, I wouldn’t tell [Sarkisian],” Jackson joked “It would just have to be one of those things where he’d have to tell me to come out.”

* Note – USC head coach Steve Sarkisian had the day off from speaking to the media on Friday, so there were no official injury updates provided.

– Among those who did not practice on Friday were Justin Davis (rib contusion), Lamar Dawson (ribs), Claude Pelon (knee), Quinton Powell (concussion), Jordan Simmons (knee), Connor Spears (undisclosed) and Chad Wheeler, who was hit in the head with a medicine ball one day earlier.

– Steven Mitchell Jr., who rolled an ankle on Thursday, was suited up but was limited.

– Going to the sideline with undisclosed injuries on Friday were Kenny Bigelow, Damien Mama and Ykili Ross.

– After missing Thursday’s workout due to back spasms, Su’a Cravens returned and took part in the entire practice session.

– USC featured a starting offensive line to start the day that had Toa Lobendahn at LT, Mama at LG, Max Tuerk at C, Chris Brown at RG and Zach Banner at RT. When Mama went to the sideline, Talamaivao went with the No. 1 group at RG, with Brown moving over to LG.

– Freshman Chuma Edoga ran exclusively with the No. 1 offense at right tackle during the final 11-on-11 period, with Banner going with the No. 2 group.

– Greg Townsend Jr. continued to go with the No. 1 group at defensive end in place of Pelon.

– McQuay and Hawkins were the primary starting safeties on Friday. Jonathan Lockett, Kevon Seymour and Iman Marshall all saw time with the No. 1 defense at cornerback.

– In addition to Sarao, safety John Plattenburg also came up with an interception – on a Browne pass that was bobbled by Christian Tober.

– There was another competitive one-on-one period, with JuJu Smith-Schuster coming up with a phenomenal juggling catch near the sideline with Kevon Seymour in coverage.

– Kris Albarado really boomed some punts during an early punt team period. It was probably his best day of camp.

– Kessler started off the first 11-on-11 period by hitting McNamara for a 15-yard gain before Sarao made the stop.

– Tre Madden showed some nice quickness, bouncing outside for a seven-yard gain.

– Kessler hit Darreus Rogers outside for a gain of close to 20 yards with Lockett in coverage.

– Kessler hit McNamara over the middle for a gain of six or seven yards.

– Browne connected deep along the sideline with Tyler Petite for a gain of around 35 yards.

– Browne hit De’Quan Hampton outside for a gain of around 10 yards.

– Browne connected with Petite outside for a gain of close to 10 yards before McQuay made the stop.

– Jackson ran outside for a seven-yard TD.

– Bigelow and a host of others stopped Soma Vainuku after a short gain.

– Kessler hit Smith-Schuster in the back of the end zone for a five-yard TD.

– Ware ran up the gut for a six-yard TD.

– Darnold tried to hit Hampton down the middle of the end zone, but Cameron Smith broke up the pass.

– Darnold threw to Jalen Greene in the corner of the end zone, but Marshall deflected the pass.

– Darnold tried to hit Daniel Imatorbhebhe in the corner of the end zone, but Smith broke up the play again.

– Madden ran up the middle for a five-yard TD.

– Kessler hit Smith-Schuster outside for a three-yard TD.

– Browne threw over the middle to Hampton in the end zone, but Marvell Tell leveled him and that ball fell incomplete.

– Browne completed a two-yard touchdown pass in the corner of the end zone to Imatorbhebhe.

– Jackson took a quick pass outside, but was dropped by Hawkins for a loss.

– Kessler connected deep along the sideline to Jackson for a 40-yard gain.

– Kessler tried to hit Smith-Schuster, but locket deflected the pass.

– Kessler swung a pass out to Jones, but Cravens stopped him for a loss.

– Darnold connected deep along the sideline with Robby Kolanz for a 35-yard-plus TD with Jalen Jones in coverage.

– Kessler hit Adoree’ Jackson deep for a 40-yard-plus gain with Lockett in coverage.

– Kessler threw outside to Ware, who bobbled the pass up in the air, and then Sarao snagged it and returned it for a TD.

– Browne hit Petite outside for a gain of around 20 yards.

– Smith stopped Jones for no gain.

– Kessler hit Jackson for a spectacular 20-yard TD in between Hawkins and McQuay.

– Browne’s pass to Tober is bobbled into the air and Plattenburg picked it off.

– Kessler hit Jackson outside for a gain of 10 yards.

– Darnold connected with Kolanz in the corner of the end zone.

– on the first play of the final challenge, Cravens stopped Jones for a loss.

– Kessler hit Dominic Davis outside for a three-yard TD.

– Kessler throws outside to Rogers, the ball fall incomplete, but pass interference is called on Marshall.

– Kessler connects with McNamara in the corner of the end zone.

– Kessler hits McNamara in the back of the end zone.