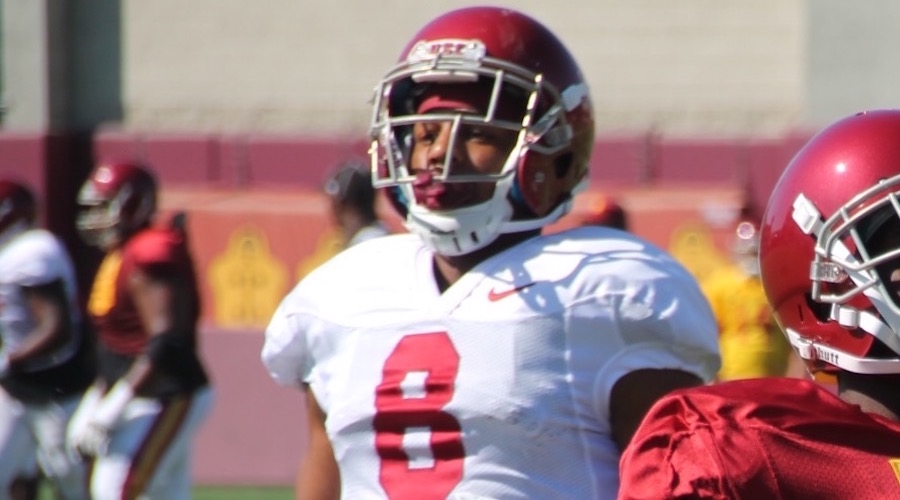 The Trojans took part in a full-pads practice session on Wednesday that featured plenty of 11-on-11 work, with a heavy emphasis on special situations.

With the defense playing at a high level, there weren’t too many offensive fireworks to speak of. In fact, the likely highlight of the day was placekicker Matt Boermeester’s successful field goal attempt from 45 yards out during a two-minute scenario. The redshirt-junior also connected on 8-of-9 attempts during a kicking period, with a long of 40 yards.

“It was good to get back out here, and really put our team in some special situations,” Helton said. “Really, I wanted to see primarily how some young kids would react, and how our quarterbacks would react. We put our guys in some blitz situations. You saw a two-minute situation out there to see how they would react. It was great to see our field goal kicker hit the end-of-the-game field goal from about 45. We worked out end-of-the-game special situations, Hail Mary with our jumpers, and end-of-game plays from the 25 to 10 – trying to get chunk plays to get in field goal range.”

As for the performance of those quarterbacks, Sam Darnold appeared to be slightly more consistent on the day, hitting JuJu Smith-Schuster for a 30-yard touchdown, and creating some positive plays with his feet – including a touchdown run – but he was also nearly picked off twice, with Ajene Harris dropping what looked like a sure interception. Max Browne, meanwhile, was picked off early by Iman Marshall, but he finished strong, completing five consecutive passes at one point.

When asked to evaluate the performance of the two passers, Helton was reluctant to provide an answer without watching tape from practice first, but he did admit to seeing some things that they can improve upon.

“I can’t wait to watch this tape,” Helton said. “I don’t think they were perfect today, just to be honest with you. Just being a quarterback coach by trade, I saw some mistakes out there, but to be able to say who did better, I’m going to have to watch the tape first.”

– Safety Marvell Tell went to the sideline late with a hamstring injury, and he was held out as a precautionary measure. Offensive lineman Chuma Edoga was also sidelined late after tweaking his toe.

– Malepeai’s broken scapula will keep him out 6-8 weeks, but it will not require surgery.

– Jefferson underwent an MRI on Monday that came back negative. Helton is hoping to have him back in action for the last half of fall camp.

– After dislocating his pinky finger on Monday, wide receiver JuJu Smith-Schuster returned and was full-go, participating in the entire practice session. Defensive tackle Khaliel Rodgers (concussion) also returned to full-time action and was praised by Helton for his play. Tailback Justin Davis (hip and knee) was back as well, but he received a lighter workload.

– With Wheeler out during the team periods, Zach Banner again slid over to left tackle with the No. 1 group, with Edoga lining up at right tackle.

– Jordan Simmons spent the day with the No. 1 offense at right guard for the first time this fall camp. Viane Talamaivao, who had been there up until today, ran with the No. 2 group.

– The entire No. 1 offense to start the day consisted of Banner at LT, Chris Brown at LG, Toa Lobendahn at C, Simmons at RG, Edoga at RT, Taylor McNamara at TE, Smith-Schuster at WR, Steven Mitchell at WR, Darreus Rogers at WR, Ronald Jones II at RB and Max Browne at QB.

– The No. 1 defense to start the day consisted of Porter Gustin at predator OLB, Stevie Tu’ikolovatu at DT, Malik Dorton at DT, Uchenna Nwosu at SAM OLB, Michael Hutchings at MIKE ILB, Osa Masina at WILL ILB, Iman Marshall at CB, Adoree’ Jackson at CB, Tell at S, Ykili Ross at S and Leon McQuay at S(nickelback).

– The defense spent the vast majority of the day running out of a nickel set.

– When Tell went out due to injury, Deion Hart came in with the No. 1 defense at safety in his place, with Ross at the other safety position, and McQuay at nickelback.

– The defense did a good job of getting after the quarterback early, with Gustin and Oluwole Betiku recording back-to-back sacks on Browne during the initial 11-on-11 period. Tell also sacked Browne later in the day.

– Jonathan Lockett had a solid practice, coming up with at least two really nice pass-break-ups. Lockett lined up at the nickel back position with the No. 2 defense for a majority of the day.

– Class of 2017 USC defensive end commit Hunter Echols was in attendance, as were two of his teammates from Los Angeles (Calif.) Cathedral, cornerback Jeffrey Manning and offensive lineman Dejon Stucky.

– Browne hit Mitchell over the middle for a gain of 6 or 7 yards.

– Browne tried to hit Isaac Whitney, but Jonathan Lockett broke up the pass.

– Darnold hit Mitchell outside for a gain of 12 or 13 yards.

– Darnold hit Cary Angeline over the middle for 10 yards.

– Darnold hit Dominic Davis outside for a gain of 6 or 7 yards.

– Browne hit Smith-Schuster outside for a gain of 8 yards with Jackson in coverage.

– Jones found a hole on the right side of the line and broke off a 9 or 10-yard run before Tell made the stop.

– Browne tried to hit Rogers outside, but Marshall made the interception.

– Connor Murphy and others stopped Aca’Cedric Ware after a short gain.

– Darnold did a nice job of buying some time with his feet before finding De’Quan Hampton for a gain of 20 yards.

– Darnold hit Tyler Vaughns with a quick pass outside, but Harris met him in a hurry and brought him down for no gain.

– D. Davis ran outside for a gain of over 20 yards, thanks in part to a big block by Simmons.

– Darnold threw a quick pass outside to D. Davis, but Gustin smothered him in the open field to hold the play to a short gain.

– Darnold hit Smith-Schuster outside for a 30-yard TD.

– Browne tried to hit Michael Pittman in the corner of the end zone, but Lockett had good position and broke up the pass.

– Harris stopped Jones for no gain.

– Darnold hit McNamara outside for a gain of 6 or 7 yards.

– Darnold hit Rogers outside for a gain of 6 yards.

– Darnold tried to hit Mitchell outside, but McQuay nearly had the interception.

– Darnold went deep to Petite, but Ross had nice coverage and the ball fell incomplete.

– Browne hit Whitney over the middle for a gain of 8 or 9 yards.

– Browne to Imatorbhebhe over the middle for a big gain.

– Browne hit Hampton over the middle for a gain of 10 yards before Quinton Powell made the stop.

– Browne’s pass is tipped at the line, but J. Davis still makes the catch for a short gain.

– Darnold threw outside, but Harris was there and nearly had the interception.

– Browne hit D. Davis over the middle for 8 yards.