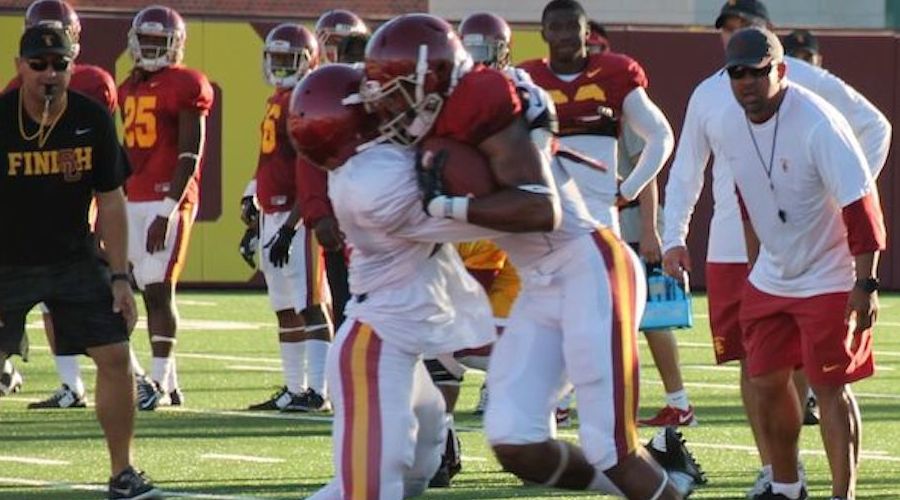 The Trojans took part in their first full-pads practice of fall camp on Wednesday, and as one might expect, it was a physical affair, with Kevon Seymour setting the tone during an early one-on-one “pride drill.” The senior cornerback sent the defense into a frenzy after dishing out a big hit on Isaac Whitney, jarring the ball out of the big wide receiver’s grasp.

“I thought it was a really good, physical practice,” Sarkisian said following the two-and-a-half hour session. “I thought the guys were intense. They were competitive, but I thought their composure was really good. So many times you put pads on the first time, and their sparks flare up. I thought our guys competed really well today, but they were composed, and they played good football, which was encouraging.”

It was a productive day for the offense, in particular, with Cody Kessler capping practice off by hitting Darreus Rogers for a 25-yard touchdown to give the offensive group a 3-1 victory in the final five-play challenge.

Rogers has started to stand out over the last few days, with the Trojans head coach taking notice.

“I think Darreus is playing well. Obviously, it was great for him to make that play at the end of practice to win the finish challenge there,” Sarkisian said. “Like anything, as you get older, you mature, you find out what’s important to you, and you put your extra time in, and I think Darreus is putting his extra time into football, and it shows. He’s playing better.”

And Rogers isn’t alone, as the entire wide receiver corps has really started to come on as of late. Marked by unique size, it’s a group that could present opposing defenses with plenty of match-up problems this fall.

“They’re a big physical group,” Sarkisian said. “You know, Steven [Mitchell Jr.] does his thing, and Christian [Tober] does his thing, but the rest of those guys are really, pretty physical guys. When you’re talking about JuJu [Smith-Schuster], De’Quan [Hampton], Isaac [Whitney] and Darreus [Rogers] – those four guys are big, physical guys that are tough to defend one-on-one on the outside.”

With Justin Davis sidelined with a hamstring injury, Tre Madden had taken a bulk of the carries in practice over the last few days, so on Wednesday Sarkisian decided to give the fifth-year senior a lighter workload, with freshmen Dominic Davis, Ronald Jones II and Aca’Cedric Ware picking up the slack.

It was Ware, out of Cedar Hill, Texas, who made the most of the increased opportunity, running with physicality throughout the practice.

“We haven’t talked about him a lot, we’ve been talking about Ronald and Dominic, but all of a sudden you put that guy in, and he’s a physical runner in full-pads,” Sarkisian said. “You see why he was the player that he was in Texas.”

Earlier on Wednesday, A Los Angeles Superior Court judge ordered USC to stay its expulsion of sophomore tight end Bryce Dixon, opening the door for his potential return to the team. Dixon was expelled from school following a student-conduct investigation earlier this summer.

In response, the university issued the following statement:

“The university stands by its student disciplinary processes that were conducted in compliance with state and federal regulations and its decisions in this case. We will carefully evaluate the judge’s written order once it is issued in order to determine our next steps.”

It’s still unclear what exactly will happen next, and at this point, it appears as though Sarkisian will have to wait to find out like everyone else.

“Obviously, we saw the university’s statement,” Sarkisian said. “They’re going to wait for the written response from the judge. That’s where we’re at with it. I wish I could give you more. You guys probably have a million question about it. We’ll see where we’re at with it tomorrow as we move forward.”

– Justin Davis (hamstring), Noah Jefferson (elbow), John Plattenburg (hip) and Viane Talamaivao (hamstring) did not participate in practice. Quinton Powell did not appear to be at practice on Wednesday.

– Walk-on defensive back Davonte Nunnery went to the sideline for the last half of practice with what Sarkisian said was a nagging Achilles’.

– On the defensive line, Claude Pelon continued to run with the No. 1 defense at defensive end along with Antwaun Woods (NT) and Delvon Simmons (DE). Cody Temple spent a majority of the day with the No. 2 defense at nose tackle.

– To begin the day, the Trojans featured a starting offensive line group that included Chad Wheeler at LT, Damien Mama at LG, Max Tuerk at C, Toa Lobendahn at RG and Zach Banner at RT. Chris Brown also saw significant time with the No. 1 group at RG, as did Nico Falah. Lobendahn also took plenty of reps at LT.

– Junior linebacker Michael Hutchings is another player who drew praise from Sarkisian. He came up with an interception on a pass thrown by Max Browne, and he also dished out a number of big hits.

– Walk-on cornerback Jalen Jones came up with back-to-back interceptions during a late 11-on-11 period, both on pass attempts by Ricky Town.

– In regard to the status of tight end Jalen Cope-Fitzpatrick, Sarkisian said, “I don’t know anything yet.”

– Among those in attendance were scouts from the Baltimore Ravens, Chicago Bears, New England Patriots and Philadelphia Eagles.

– The team has the day off on Thursday and will see the movie “Straight Outta Compton.”

– Cody Kessler tried to hit Soma Vainuku along the sideline, but Olajuwon Tucker broke up the pass.

– Adoree’ Jackson and a host of others stopped Madden after a short gain.

– Kessler hit Rogers outside for a gain of close to 15 yards with Jackson in coverage.

– Browne connected with Christian Tober for a 50-yard touchdown with Ykili Ross in coverage.

– Sam Darnold hit Daniel Imatorbhebhe, who bounced outside, showing a nice burst and picking up around 20 yards.

– Ware cut and weaved his way for a 10-yard gain before Ross made the stop.

– Rogers made a diving grab over the middle on a Kessler throw for a gain of around 10 yards.

– Browne connected with Tober outside for a gain of close to 20 yards.

– Ware ran up the middle and gained seven or eight yards.

– Browne hit Connor Spears outside for a gain of 11 or 12 yards.

– Kessler connected with Smith-Schuster for a gain of 30 yards over Jonathan Lockett and Leon McQuay III.

– Kessler hit Tyler Petite for a gain of 20 yards before Marvell Tell made the stop.

– Kessler connected with Petite for another gain of close to 20 yards outside.

– Kessler connected with Hampton along the sideline for 20 yards with Iman Marshall in tight coverage.

– Ware caught a Kessler pass outside and ran along the sideline for a gain of close to 10 yards.

– Kessler connected with Steven Mitchell Jr. outside for a gain of 25 yards.

– Darnold hit George Katrib over the middle for 15 yards.

– Kessler threw outside to Smith-Schuster, but Kevon Seymour stepped in front, but he dropped the sure pick.

– Rogers went up high to snag the Kessler pass for a gain of nine or 10 yards with Jackson in coverage.

– Kessler went outside to Rogers, who juked out Hawkins and darted off for a gain of 20 to 25 yards.

– Browne threw over the middle, but Hutchings was there to make the interception.

– Browne connected deep with Robby Kolanz for a 40-yard gain with Isaiah Langley in coverage.

– Kessler hit Mitchell over the middle, and he weaves his way for a 30-yard-plus gain.

– Jones runs outside for a gain of 35 yards.

– Browne hits Kolanz, who is hit hard by Hutchings.

– Osa Masina drills Spears after he makes the catch, forcing the fumble that John Houston recovers.

– Kessler hit Smith-Schuster over the middle for 15 yards.

– Town throws outside, but Jones makes the pick.

– Town tries to hit Katrib, but Jones again steps in front of it and makes the interception.

– On the first play of the final five-play challenge, Ware picks up six or seven yards before Porter Gustin makes the stop.

– Kessler’s pass to Mitchell falls incomplete, but a flag is thrown on the defense.

– Kessler finds a wide-open Rogers down the middle for a 25-yard touchdown.