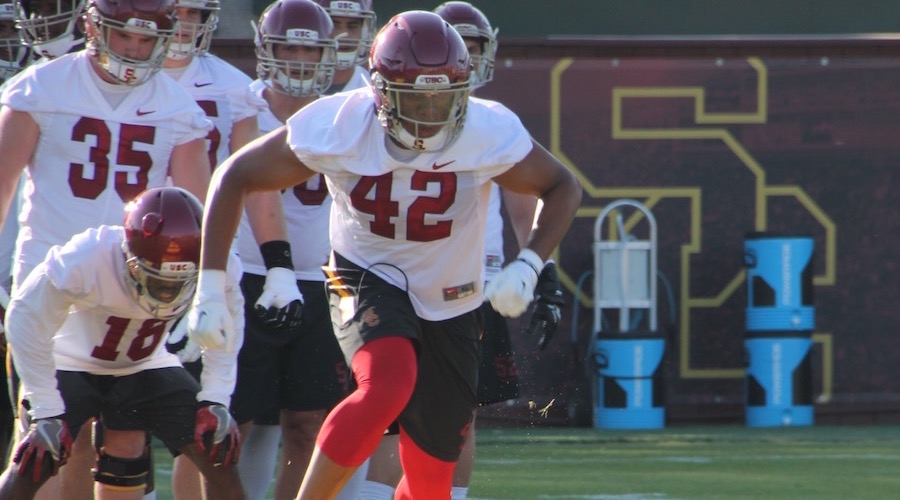 One day after the offense earned praise from USC head coach Clay Helton for their performance, the defense stole the show on Sunday, playing fast and physical throughout a two-and-a-half hour practice in shorts, shoulder pads and helmets.

With the team spending a majority of the day going through red zone situations, it was the defensive front seven that really stood out, particularly in a late 11-on-11 period that featured highlight-reel stops behind the line of scrimmage by Osa Masina, Uchenna Nwosu, Quinton Powell and Stevie Tu’ikolovatu.

“We really challenged them today, and I really liked how the defense performed,” Helton said. “I thought when we got down there they had an attitude about themselves, and really it spoke volumes about where they’re at right now. From Day 1 of the spring, to right now where we’re at, I told them it’s light years. Not only learning the system, but also some personnel that has come in.”

In discussing the defensive line, Helton pointed specifically to a pair of those new additions in Tu’ikolovatu, a graduate transfer from Utah, and Josh Fatu, who came to USC by way of Long Beach City College, as players who have not only helped in terms of depth, but who have also added some much-needed maturity to the unit.

Tu’ikolovatu, in particular, has really started to come on over the past two days. After taking some periodic snaps with the No. 1 defense at nose tackle throughout the first three practice sessions of fall camp, he appeared to take a majority of the reps there on Sunday – ahead of Jacob Daniel.

“To all of a sudden add a Stevie, and to add a Josh Fatu – two old souls…Stevie is 25 years old, he’s married, he’s a grown man – to add that maturity to the room is huge,” Helton said. “And Josh I thought might be one of the better takes that we took in that recruiting class, just from the maturity level. The physical maturity-level that he brings to the table, it’s made an instant impact.”

Mama not backing down at left guard

A common topic during Helton’s post-practice media scrum was the competitive atmosphere that has taken hold this fall camp – particularly in comparison to recent years past. It’s been noticeable not only when the offense and defense go head-to-head during the 7-on-7 and 11-on-11 periods, but also within a number of position groups.

The duel between Max Browne and Sam Darnold at quarterback has obviously garnered much of the attention, but the battle at left guard between Chris Brown and Damien Mama has been extremely intriguing as well.

After a strong showing in the spring, it’s been Brown who has been running exclusively with the No. 1 group so far, and he’s been performing at a high level with the unit. But as Helton explained, Mama has responded well to the challenge, and it’s safe to say that the competition is far from over.

“Nobody has won that job,” Helton said. “I anticipate Coach [Neil] Callaway kind of mixing them in with the ones back-and-forth. But Chris got the honor. He came away in the spring having played a little bit better than Damien, being more accountable. And it’s kind of lit a fire under Damien.”

Providing evidence of that fire, Helton shared a moment from Sunday’s practice.

“My favorite play of the day is we’re sitting out there and Coach [Tee] Martin calls power right, and Damien comes up to me and says, ‘Hey coach, this one is for you,’ and he pulls and absolutely annihilates the inside linebacker.” Helton said. “You can really see a fire under him.”

– Max Browne, who tweaked his ankle late in practice on Saturday, participated in the entire practice session on Sunday. And while his ankle was taped, he did not appear to be hampered in any way. He took a majority of the reps with the No. 1 offense on Sunday, but Sam Darnold still saw time with the first group as well. Both quarterbacks had a solid day completing passes in the red zone, especially early on.

– Justin Davis sat out the bulk of practice due to knee and hip injuries, but Helton said they are not serious.

– Keyshawn ‘Pie’ Young appeared to be limited, and he was spotted with his shoulder wrapped in ice at the end of practice.

– With Hawkins sidelined, Ykili Ross came in with the No. 1 defense in nickel situations – a role Hawkins had filled. Leon McQuay and Marvell Tell continued to go with the No. 1 unit when the defense was in their base set.

– Michael Hutchings (MIKE) and Powell (WILL) continued to take a majority of the reps with the No. 1 defense at the inside linebacker positions, but Cameron Smith (MIKE) and Osa Masina (WILL) also continued to see time with the ones as well.

– Toa Lobendahn again spent a majority of the day with the No. 1 offense at center. Nico Falah took some reps there later in practice.

– During a field goal period Matt Boermeester connected on 3 of 5 attempts, with a long of 35 yards. Michael Brown went 3-for-7. Iman Marshall blocked one of Brown’s attempts.

– Scouts from the Houston Texans, Los Angeles Rams, and New York Jets were also on hand.

– The Trojans will practice in the Coliseum on Monday, before getting a day off on Tuesday. They will take part in the first scrimmage of fall camp on Wednesday.

– Aca’Cedric Ware ran outside for a gain of 8 or 9 yards.

– Ware was smothered for no gain.

– Nwosu recovered a fumble that appeared to come on a botched exchange, returning it for a touchdown.

– Ronald Jones II ran up the gut and made a nice spin move before breaking loose for a gain of over 10 yards.

– Darnold evaded pressure and ran off for a gain of 8 or 9 yards.

– Vavae Malepeai ran outside for a gain of 7 or 8 yards.

– Darreus Rogers made a diving catch over the middle on a pass thrown by Browne.

– Browne threw to the back of the end zone, and Tyler Petite made a beautiful reaching catch for a 20-yard TD over Matt Lopes.

– Darnold hit Michael Pittman in the corner of the end zone for a 20-yard TD over Jack Jones.

– Darnold went back to Pittman in the corner of the end zone for a 15-yard TD.

– Browne hit Taylor McNamara over the middle for a 20-yard TD.

– Browne tried to hit Trevon Sidney over the middle, but Marvell tell broke up the pass.

– Browne hit Petite over the middle for a 5-yard TD.

– Darnold hit Steven Mitchell over the middle for a 20-yard TD.

– Darnold hit Josh Imatorbhebhe over the middle for a 15-yard TD.

– Nwosu stopped Jones for a loss.

– Ware fumbled at the goal line, and the defense recovered.

– Darnold hit Rogers in the back of the end zone for a 5-yard TD.

– Darnold tried to hit Mitchell over the middle, but Tell broke up the pass.

– Nwosu stopped Jones for no gain.

– Darnold tried to hit Isaac Whitney in the end zone, but Adoree’ Jackson jumped high to break it up.

– Browne hit Deontay Burnett over the middle for a gain of 5 yards and Cameron Smith leveled him.

– Tu’ikolovatu dropped Ware for a loss.

– Powell stopped Ware for a loss.

– Browne hit Tyler Vaughns over the middle for a 10-yard TD.