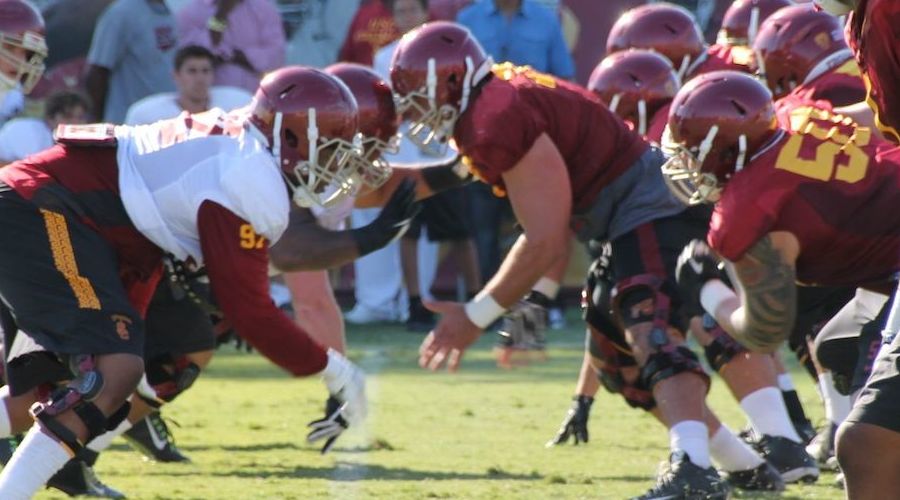 The Trojans were in shorts, shoulder pads and helmets for the first time on Monday, and as to be expected, the session was marked by some physical play, but according to USC head coach Steve Sarkisian, also a drop-off in intensity compared to the first two days.

“It was somewhat of your typical Day 3,” Sarkisian said. “The first day of pads, the fatigue kicks in because you get used to practicing the first two days without collisions, and in Day 3 the collisions kick in, and collisions can cause fatigue similar to running, and I think we saw a little bit of that today. And with the fatigue came a little bit of distraction, and with distraction came a few more mistakes.”

The most glaring example of one of those mental errors was made by the defense on the last rep of the final five-play challenge in the red zone. With the offense and defense tied up 2-2, there was a defensive breakdown in coverage that allowed quarterback Cody Kessler to find a wide-open Tre Madden over the middle for a touchdown, giving the offense a 3-2 victory.

“That’s the challenge – at the most critical moments are when we need to be at our best,” Sarkisian said. “And the offense just kind of continued to execute, the defense made their mistake, and the offense took advantage of it, and Cody found Tre for a touchdown. So, that’s all part of the process.”

With Viane Talamaivao sidelined for the second consecutive day with a hamstring injury, Toa Lobendahn shifted over from left tackle to Talamaivao’s normal right guard spot with the No. 1 group for much of the day, with Chad Wheeler moving into the lineup at left tackle – where he’s started 22 games in his career.

Lobendahn, who also slid back over to left tackle later in practice, has had an outstanding camp so far, and it’s his versatility that impresses Sarkisian most.

“He’s a very gifted guy,” Sarkisian said. “He has a really high football IQ. He’s got a really versatile frame, and athletic build to him that he can go and do all of those different things, and that’s the luxury of having a guy like that.”

Also going with the No. 1 group for a majority of the day was Max Tuerk at center, Damien Mama at left guard and Zach Banner at right tackle. But with improved depth within the group as a whole, USC offensive line coach Bob Connelly continued to rotate some other faces in at times, with freshman Chuma Edoga taking reps in place of Banner, and Nico Falah taking some snaps at right guard.

– Freshman running back Dominic Davis came down hard on his lower back and was unable to return, although he was later spotted up and walking around.

– Freshman defensive lineman Noah Jefferson went to the sideline with a hyper-extended elbow and did not return.

– Sarkisian praised the play of the defensive front following Monday’s practice. At one of the interior defensive end spots, Cody Temple continued to run with the No. 1 unit along with Antwaun Woods (NG) and Delvon Simmons (DE).

– There was a brief scare at one point when cornerback Adoree’ Jackson and wide receiver Steven Mitchell Jr. collided on a passing play, with Mitchell limping off. Both players did return to action, however.

– During the field goal period, Matt Boermeester connected on 3 of 4 attempts, while Alex Wood connected on 2 of 3 attempts.

– Sarkisian said that freshman cornerback Iman Marshall had his best day of camp so far on Monday, something he attributed to the fact that the team wore pads for the first time, which played to his more physical style of play.

– Fullback Soma Vainuku had a solid practice, with his day highlighted by 15-yard touchdown reception from Kessler on a wheel route.

– Also in attendance were scouts from the Detroit Lions and New York Giants.

Sarkisian on former USC All-American and NFL Hall of famer Frank Gifford, who passed away on Sunday at the age of 84.

“I know we talk a lot about Adoree’ being this three-way player, I think Frank Gifford was the ultimate three-way player in what he did, not only in college football, but in the NFL. I’d be remiss if I didn’t say that we lost a great Trojan, and it’s something that we shouldn’t just let pass over.”

– Kessler threw over the middle to JuJu Smith-Schuster, but Chris Hawkins was there to break up the pass.

– Temple stopped Madden for no gain.

– Max Browne connected with De’Quan Hampton, who made a nice reaching grab over Isaiah Langley for a 30-yard touchdown.

– Browne went to Ronald Jones II in the end zone from the 30-yard line, but Ykili Ross deflected the pass.

– Ricky Town hit George Katrib over the middle for a gain of close to 15 yards.

– Kessler connected with Mitchell outside for a gain of close to 25 yards.

– Lamar Dawson came up and put a nice pop on Tre Madden to limit the run to a short gain.

– Browne hit Katrib deep for a 35-yard gain with Langley in coverage.

– Madden ran left for a gain of 7 yards.

– Darnold scrambled, then threw across the field and completed the pass to Robby Kolanz for a gain of 15 yards.

– Dominic Davis ran outside for again of eight or nine yards.

– Town threw deep to David Mellstrom, but the pass was underthrown and picked off by Kevin Carrasco.

– Kessler swung a pass out to Madden and he ran in for a 15-yard touchdown.

– From the five-yard line, Kessler connected over the middle in the end zone with Smith-Schuster.

– Porter Gustin came up with a sack.

– Browne’s pass went off Hampton’s hands and into the air, and Marvell Tell made a diving interception.

– Browne completed a five-yard touchdown pass to Christian Tober over the middle.

– Kessler threw over the middle and Tyler Petite made a nice reaching grab in the back of the end zone for a 20-yard touchdown.

– Vainuku hauled in a 15-yard touchdown pass from Kessler.

– On the first play of the final five-play challenge, Kessler completed a 12-yard pass to Mitchell.

– Kessler hit Mitchell for a gain of close to 10 yards.

– Madden was stopped by Gustin and Co. for no gain.

– Kessler hit a wide-open Madden over the middle for a 10-yard touchdown.