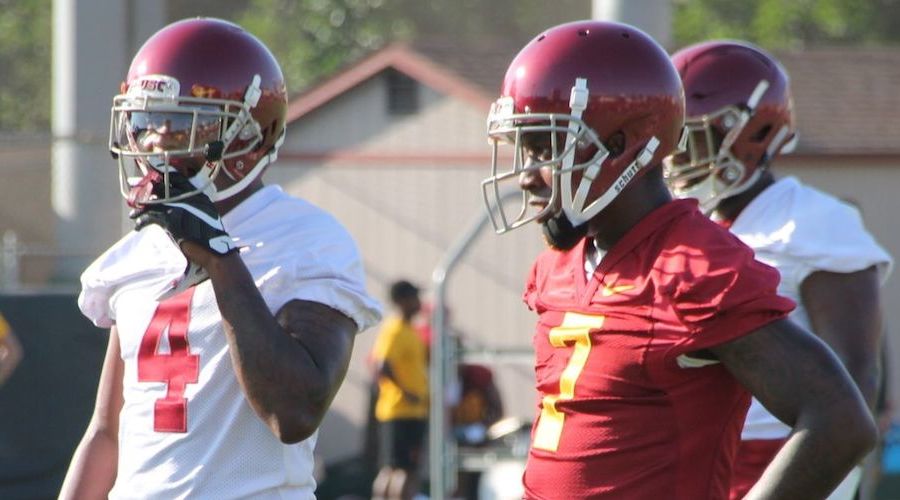 The Trojans put on shoulder pads for the first time on Saturday, and as to be expected, the two-and-a-half hour practice session was marked by some physical play. It was particularly evident during an early team-run period that USC head coach Clay Helton said was won by the offense, thanks in large part to Neil Callaway’s offensive line group, which paved the way for tailbacks Justin Davis and Ronald Jones II to pick up some nice gains on the ground.

“They did a great job of assignment football, and really controlling the line-of-scrimmage with that first team,” Helton said. “It was great to see.”

Through the first few days of workouts, the No. 1 offensive line unit has primarily featured Chad Wheeler at left tackle, Chris Brown at left guard, Toa Lobendahn at center, Viane Talamaivao at right guard and Zach Banner at right tackle. An extremely veteran group, they’ve stood out not just because of their blocking, but also for how crisp and cohesive they’ve looked, with the unit avoiding any false starts or glaring foul-ups.

“I think it’s really clean, and I would hope to expect that,” Helton said. “One of the things that’s really hitting me, especially with that first offensive line, you have two senior tackles, the interior is two junior guards and a junior center, so you have older guys up there. And then even the backups are older guys.”

Another offensive performer who was lauded by Helton was redshirt-junior wide receiver Steven Mitchell Jr.

Having entered USC as a highly touted member of the Class of 2013, he’s had to battle through a number of injuries in his career, and while he’s proven to be a valuable contributor at times, he hasn’t quite had the kind of breakout year just yet that many have expected.

Now completely healthy, and looking to be in fantastic shape, Mitchell is having arguably his best camp as a Trojan. He’s made a number of standout catches through the first three days of practice, including a highlight-reel reception deep downfield on Saturday.

“I appreciate him challenging himself,” Helton said. “Not treating it like you’re a vet. Let’s make this your best year. You’re the healthiest you’ve ever been. It’s your time to shine. It’s time to be the guy to push the ball deep to, and he’s really taken a great approach to it. And I appreciate him because he’s not coming out here saying, ‘O.K., I’m going to just go through camp.’ He’s treating every day like it’s a game.”

On the defensive side of the ball, one player who has started to turn some heads with his play is safety Ykili Ross. Appearing to have fully recovered from a shoulder injury that forced him to redshirt this past season, he’s shown a ton of promise while running primarily with the No. 2 and No. 3 defensive groups.

With Chris Hawkins going to the sideline with a hamstring injury on Saturday, Ross even got a chance to run with the No. 1 group in some nickel situations, and he immediately came up with an interception on a deep pass that was thrown by Max Browne. Ross also nearly had another interception earlier in practice, breaking up a pass from Sam Darnold to Michael Pittman.

“Clancy [Pendergast] has been very pleased with him,” Helton said. “He had a great offseason. He was hurt last year, [and] spring-wise he was very limited. And then he comes into this camp and he’s been lights out, and he’s really has gone to somebody that’s kind of climbing up the ladder just because of the way he’s playing.”

– JuJu Smith-Schuster was limited due to a toe sprain that he has been battling. He took part in individual drills only, and appeared to be moving extremely well. Helton said that X-Rays taken on the toe came back negative, and that he expects to have him back in full time action in a couple days.

– Max Browne rolled an ankle and came out at one point, but he returned a few plays later and appeared to be fine.

– As noted above, Hawkins ‘tweaked’ his hamstring according to Helton.

– Tyler Petite was dealing with a minor shoulder issue, but participated in practice.

– After going to the sideline on Friday, Quinton Powell (leg cramp) and Keyshawn Young (shoulder) returned to action on Saturday. Jalen Greene (hamstring) appeared to be limited.

– Noah Jefferson (back) and Jamel Cook (ankle) did not participate in practice.

– Stevie Tu’iolovatu also took a number of reps with the No. 1 unit at nose tackle.

– Cameron Smith and Osa Masina also saw time with the No. 1 group.

– Nico Falah continued to take reps with the No. 1 offense at center as well.

– During a field goal period Matt Boermeester connected on all four of his attempts, with a long of 35 yards, while blue shirt freshman Michael Brown went 3 for 4. Darnold and Jackson Boyer took turns serving as the holder.

– J. Davis ran outside and made a really nice cutback to pick up 7 or 8 yards before McQuay made the stop.

– Daniel Imatiorbhebhe made a great diving catch for a gain of 15 yards on a pass from Darnold.

– Darnold went deep to Pittman, but Ross broke it up.

– Masina stopped Jones for a loss.

– Browne hit Darreus Rogers outside for a gain of close to 10 yards with Marshall in coverage.

– Browne hit De’Quan Hampton over the middle for a gain of close to 20 yards before Tell made the stop.

– Darnold hit Isaac Whitney outside for a gain of 10 yards.

– Darnold hit Taylor McNamara over the middle for a gain of 12 or 13 yards with Masina in coverage.

– Browne went deep to Hampton, and Ross came up with the pick.

– Browne connected deep with Mitchell over Tell and McQuay.

– Darnold hit Petite over the middle for 9 or 10 yards.

– Darnold hit Aca’Cedric Ware with a quick pass over the middle, but smith smothered him to limit the play to a short gain.

– Darnold hit Deontay Burnett over the middle for a gain of close to 30 yards.

– Browne hit Hampton outside for a gain of 20 yards before Matt Lopes made the stop.

– Dominic Davis had an explosive run outside for a gain of 25 yards or so.

– Browne hit Rogers outside for a gain of close to 20 yards.

– Daniel and others sacked Matt Fink.