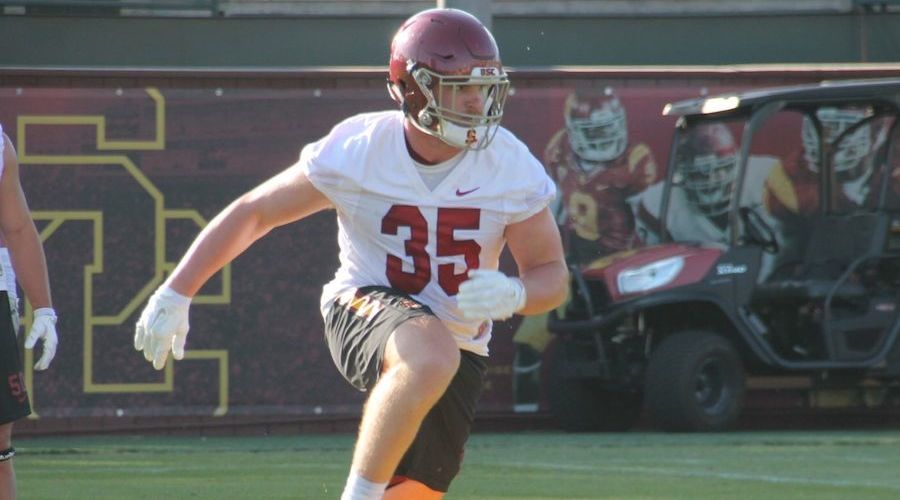 It was Day 2 of fall camp for the Trojans on Friday. Dressed, once again, in shorts and helmets, there was a special emphasis on first and second-down situations, with USC head coach Clay Helton noting just how much cleaner the offense looked, as a whole, in comparison to one day earlier – when they fumbled the ball away on a number of instances.

Helton specifically brought up the play of some key upperclassmen when discussing what stood out to him on Friday.

“It was neat to see the veterans come out and make some plays,” Helton said. “You saw JuJu [Smith-Schuster] make some big plays. Steven Mitchell is having an unbelievable camp right now in two days, doing a terrific job. And then you saw Adoree’ [Jackson] make a pick-six today. So, it was neat to see the veterans doing a great job and really show up.”

Smith Schuster’s standout day featured plenty of big-time catches, including a fantastic leaping reception over Keyshawn ‘Pie’ Young, as well as a 35-yard touchdown catch along the sideline over Jackson. As Helton referenced, however, Jackson certainly won more than his fair share of battles as well. His pick-six came on a pass from Max Browne that was intended for Smith-Schuster, with the talented cornerback reading it perfectly.

It wasn’t all good news for all of those veterans, however, as Smith-Schuster limped off the field late in practice with a toe sprain. Helton noted that Smith-Schuster actually entered Friday’s workout with the injury, and while it isn’t especially serious right now, it’s something that they will continue to monitor.

“We limited him a little bit today,” Helton said. “You never want it to get almost to turf toe. He was a little sore today. He taped it up and said, ‘Coach, I really want to go,’ and he did a great job.”

One of the biggest revelations of the early goings of camp has been the performance of inside linebacker Cameron Smith, who appears to be well ahead of schedule after suffering a torn ACL in his knee this past season.

Taking part in a little over half of practice on Thursday, Smith came back on Friday and participated in virtually the entire session, including the team’s big 11-on-11 period near the end of the day.

“I would say I’m 100 percent,” Smith said after practice. “I’m cleared, they’re just getting me back in the rhythm and going again. I feel comfortable. Today was the first live period [for me]. I felt good moving around and seeing things pretty well, so it’s good to be back for sure.”

The potential return of Smith – the 2015 Pac-12 Defensive Freshman of the Year – in time for the Trojans’ opener against Alabama on Sept. 3 would obviously be huge for Clancy Pendergast’s defensive unit. The starting MIKE linebacker prior to his injury last season, he’s been spending time with the No. 1 and No. 2 units here in camp so far.

Having injured his knee against Colorado just this past November, his quicker-than-expected recovery has come as a surprise to most – but not himself.

“Everyone is different – that’s what I’ve been told throughout the whole process,” Smith said. “Everyone recovers differently. So, when I got the go-ahead, I said, ‘Alright. I’m ready.’ And I felt confident in my knee and the people I was working with, so I’m happy and excited to be back.”

– In addition to Smith, two other players who participated in the late 11-on-11 team portion of practice after sitting out the period one day earlier were center Toa Lobendahn and Jackson. Lobendahn is also coming off a knee injury suffered last season, while Jackson is being eased back into action after having focused his attention on the long jump in recent months.

– Noah Jefferson (back) and Jamel Cook (ankle) did not participate in practice. Jefferson missed a number of practices in the spring due to his back as well.

– Jalen Greene came out early due to a hamstring that was tightening up on him, Young left with a shoulder injury, and Quinton Powell also left early with a cramp in his calf. Helton does not believe any of the injuries to be serious.

– Prior to going to the sideline, Young spent the day at cornerback on Friday after working out at wide receiver on Thursday. Listed with jersey No. 83 on the most recent roster, he wore No. 17 on Friday

– The No. 1 offense to start the day featured Max Browne at QB, Justin Davis at TB, Darreus Rogers at WR, JuJu Smith-Schuster at WR, Steven Mitchell at WR, Taylor McNamara at TE, Chad Wheeler at LT, Chris Brown at LG, Toa Lobendahn at C, Viane Talamaivao at RG and Zach Banner at RT.

– The No. 1 defense to start the day featured Porter Gustin at Predator OLB, Uchenna Nwosu at SAM OLB, Rasheem Green at DT, Jacob Daniel at N, Malik Dorton at DT, Michael Hutchings at MIKE, Quinton Powell at WILL, Marvell Tell at S, Leon McQuay III at S, Adoree’ Jackson at CB and Iman Marshall at CB.

– The defense also spent a good portion of practice in a nickel set, which brought Chris Hawkins into the defense at safety, with McQuay covering the slot. Hawkins also took some reps with the No.1 defense when the Trojans were in a base set.

– Both Browne and Sam Darnold took snaps with the No. 1 offense.

– There was a heated exchange of words between De’Quan Hampton and  Jackson after a play at one point, with the two eventually coming to blows before they were separated. Helton immediately brought the team together before having them run a series of up-downs.

– During a special teams field goal period Matt Boermeester connected on all five of his attempts, with a long of around 40 yards. Blue shirt freshman Michael Brown went 2-for-4.

– Helton said that he plans to have the team run through three scrimmages during fall camp.

– The Trojans had a special guest today in T.J. Vargas, a USC fan with cerebral palsy. The entire team huddled around him mid-way through practice before pushing him into the end zone and celebrating with him.

– Browne tried to hit Mitchell outside, but McQuay broke up the pass.

– Browne hit Justin Davis outside for a big gain.

– Darnold hit Cary Angeline over the middle for a gain of 11 or 12 yards.

– Browne hit Hampton outside for a gain of close to 10 yards.

– Browne hit Smith-Schuster along the sideline over Jackson for a 35-yard TD.

– Browne tried to hit Smith-Schuster outside, but Jackson stepped in front and picked it off and returned it all the way.

– Browne hit Mitchell outside for a gain of around 15 yards before Jackson made the stop.

– Darnold hit Tyler Petite with a quick pass outside, but Hawkins came up in a hurry and stopped the play for no gain.

– Darnold went deep for Tyler Petite but Hutchings broke up the pass.

– Browne hit Mitchell outside for a gain of 10 yards.

– Browne hit Smith-Schuster with a deep pass along the sideline over Isaiah Langley.

– Nwosu applied pressure on Browne, so Browne took off running for a nice gain.

– Darnold went deep to Smith-Schuster, who made a leaping catch over Young.

– Browne hit Pittman outside for a gain of close to 15 yards.