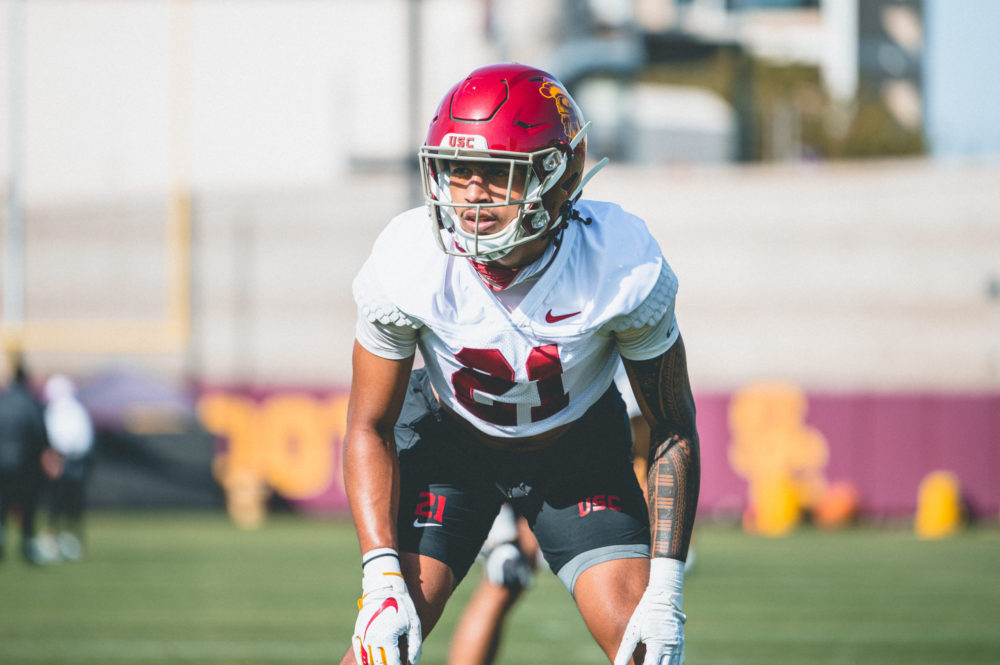 No position got more spring help than the USC safety group, which added three freshmen early enrollees plus a transfer in Xavion Alford. The group is still thin according to position coach Craig Naivar, but he’s been impressed with the overall production. That starts with the returning players he has, in Isaiah Pola-Mao, Chase Williams, Briton Allen, and extends to the newcomers as well.

“It’s been the accountability with a lot of young guys out there and new guys, as far as getting our defense lined up and communicating,” Naivar said of what from his position group has impressed him the most this spring. “Everything runs through the safety position as far as checks, alignments, blitz checks, multiple things that we have to do pre-snap, and we haven’t watered that down for the young guys, we haven’t watered that down for the new guys.”

The young guys are Xamarion Gordon, Anthony Beavers Jr. and Calen Bullock, and they’ve needed to be ready to go because the safety depth was tested quickly. Greg Johnson is unavailable at nickel this spring and USC lost Max Williams for the season with a torn ACL early in spring practice.

Naivar has turned to Pola-Mao to fill in at nickel, and the senior has responded well and seemingly without any issues.

“We preach versatility in our room and we’re all kind of the same position at the end of the day,” Pola-Mao said. “For me, I accept the challenge because I needed to work on my man [coverage] anyway, so everything kind of works out.”

Lining up in the secondary with Pola-Mao have been Williams and Alford. Naivar was familiar with Alford after recruiting him to Texas, so he had an idea of what was coming in when Alford announced his transfer destination. Naivar likes that Alford has a season under his belt at this level and also likes what he brings to the USC secondary.

Naivar said the next step for Alford will be playing well when it matters most.

“You gotta show up and play when the lights are on,” Naivar said, adding there were positive and negative plays from Alford during the Spring Game. “That’s just part of youth and working through those. That’s something in progress.”

Williams has been a mainstay in the starting lineup since the opening practice of spring ball. He could have the very difficult task of replacing Talanoa Hufanga in the starting lineup. Naivar said this Todd Orlando-led defense is special because it doesn’t ask a player to specifically fill the shoes of another player if their skill sets are different. But he does see some similarities between Williams and Hufanga.

“Chase has done a really good job of understanding that there was a void placed by Talanoa, and Chase is very much analytic like Talanoa, a very smart football player,” Naivar said, adding that NFL personnel have called to rave about how well Hufanga has done during the interview process before the draft. “Chase is very smart in the exact same way. Chase has done a great job with coming out and being leader to help Zay (Pola-Mao) and coming out and doing that and being a vocal leader at practice. And then he’s also done a great job in the weight room, getting his body ready to do the things he does. He’s done a really good job throwing his body around all spring and that was a trademark of Talanoa, and he’s continued to do that as well. So yes, I’m extremely pleased with how he’s doing.”

The safeties have been involved in plays all over the field this spring and that’s by design. Naivar has a fairly simple mantra for his group to follow.

“Accountability. Run and hit,” he said. “Be accountable in everything you do, on and off the field. And run at people. We’ll fill it in between there.”

The ability to see Pola-Mao at nickel and get significant playing time for the newcomers will have been a huge plus for Naivar when fall camp and the 2021 season comes around. It’s also why the coaches focus so much on teaching all three safety positions to everybody in the unit.

“You learn everybody’s jobs,” Naivar said of teaching the entire defense to all the safeties to allow them to move around and fill in at different spots. “Because you have to also understand what’s the weakness of that concept you’re running, because that’s where they’re going to attack it…So we have answers when those situations arise, because you can’t just try to come up with that answer when it happens. You’ve got to know that before it happens.”

Naivar is like the rest of the USC assistant coaches in that they’ve seen some positives and some things to work on during spring ball. But ultimately, just being out there and the intensity and enthusiasm the team has consistently brought to practice is the biggest positive.

“These young men do not take for granted this opportunity,” Naivar said. “Practice eight, nine, 10, 12, where spring ball can become somewhat stale, it’s not been that way because these young men understand that one year ago they were tearing up their Netflix account rather than doing what they’re doing now. So that’s been really fun.”