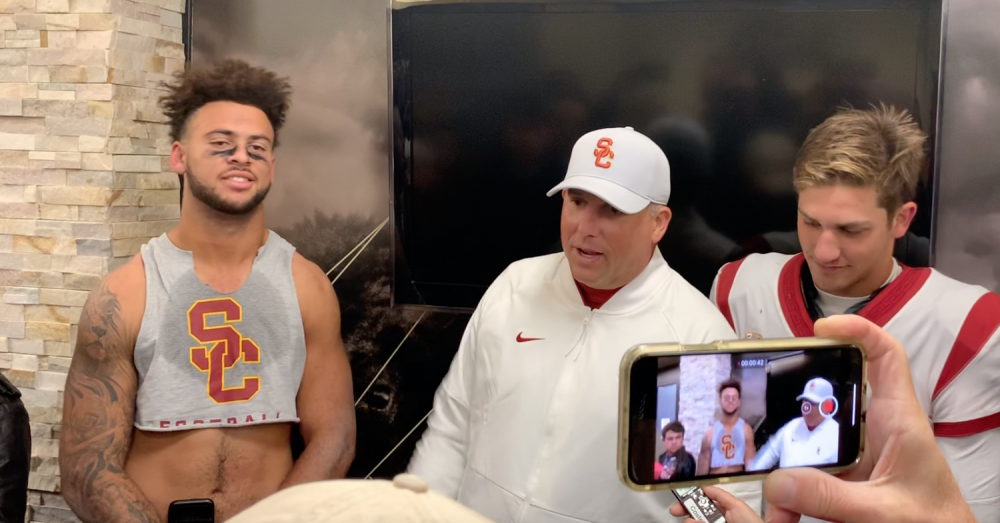 USC Trojans head football coach Clay Helton (photo above) held a media phone conference on Sunday night and discussed a number of items, as the Cardinal and Gold begin preparation for their highly anticipated Pac-12 home confrontation with the No.7 Oregon Ducks this Saturday (5 p.m. PDT) in the Los Angeles Memorial Coliseum.

Among the subjects discussed were the following: Injuries, Kedon Slovis, the wide receivers, Kenan Christon, the impressive play of offensive guard Liam Jimmons, and some brief thoughts regarding the Oregon Ducks under second-year head coach Mario Cristobal.

The media conference started with some opening remarks by head coach Clay Helton.

Helton: After watching the game, I came away with a bunch of positives. One, a big Pac-12 win on the road for our football team, which we’re going to have to do a couple more times in order to win the Pac-12 South. To be able to go on the road and get that win builds a lot of confidence for our team. Other things after watching the tape, it was great to see the maturity of (QB) Kedon (Slovis) after making an early mistake (interception) and didn’t get rattled and was able to fight his way back. I thought the Big 3 (recievers) on the outside with Amon-Ra, Tyler (Vaughns), and Pittman. We asked them to step up big and a couple of them (Pittman and Vaughns) had 100-yard games. Add Drake (Jackson) to it with his 85 yards, especially a huge play on the last drive, and it helped us get a first down on that last drive. He played a really mature game. They (receivers) are one of the best in the country.

Helton: I thought he played beyond his years. He rushed for 76 yards on 14 carries, and you could see his effectiveness out of the backfield and his touchdown catch.

Helton: I thought one of the biggest keys to the game was the second half when we got off the field on third down. Colorado was 1 of 7 on third downs. It was huge being able to provide more opportunities for our offense coming from behind. And then, I thought the hidden gem of the night was (punter) Ben Griffiths. Sometimes a punter doesn’t get a lot of credit, but his 46.2 average, especially his last punt was on the minus-15 in that fourth quarter needing to flip the field was on the minus-13. It was just a huge play by him.

On the finish by the Trojans

Helton: Lastly, I liked the finish by our team. Being down 10 and winning the fourth quarter 14-0. They have a never say die attitude and a ‘Fight On’ attitude that has been evident to me this season. I appreciate their mentality, our staff’s mentality and finding a way to get the job done.

On the injury situation and the possible return of players for the Oregon game.

Helton: I will have some better answers for you on Tuesday. The guys will be reporting back tomorrow morning (Monday); they’re off today (Sunday). Some guys were getting treatment. We have a couple guys right on the cusp, a (defensive end) Christian Rector, a (corner) Chris Steele. The biggest thing that happened to us in the last game is that we came out of it without injuries and not adding to the injury list.

Helton: As far as Liam, if you remember when we recruited Liam, he was a tight end and a defensive lineman we thought could end up being a quality D-lineman or O-lineman. We knew he was going to be a big person. As you’ve seen, he’s become a 300-plus pounder. He’s done a great job of developing and great athleticism, great toughness, instinctive, and football smart. Drew just wasn’t feeling great at the beginning of the game. He wasn’t feeling like himself. We have a little bit of a bug going around. It must have been the altitude; he just wasn’t feeling great.

On the the number of carries for Kenan Christon.

Helton: I thought he did a terrific job. He got 16 touches in the game, 14 runs, and two catches. He comes up with 5.4 yards per carry and had 76 total yards rushing and a touchdown catch. He did the things that were needed in the game. What was really neat was that I thought you could always tell a player by his eyes when he’s out there as he comes on and off the field. He just looked very calm. He looked excited for the moment, having a chance to go out there and play and help his teammates. That’s a great sign. The best thing he did was secure the ball. You always worry about a young guy getting out there the first time. That’s two games in a row that he has had great ball security and made positive yards for us. He’s a home run hitter. I thought a couple times he’s right there at the last and I though ‘Oh my goodness it’s just one guy and he’s gone.’ He’s got to make the last one miss. Every time he touches the ball, you hold your breath.

On Amon-Ra St. Brown playing running back and any anticipation of playing him more at running back.

Helton: We’ll never give away the game plan, but one of the qualities of Amon-Ra, I think, is that he reminds me of what Robert Woods brought to the table for us when he was here. He (St. Brown) is one of the more physical players for us either offensively or defensively. As a runner, as a blocker, as a pass catcher, he’s tremendous after the catch or running. There’s a reason he’s returning punts for us; there’s a reason we put him in the backfield. He has dynamic running skills and is physical.

It appeared the longer the game went at Colorado, the better the defense got with its tackling.

Helton: I thought in the first half, we let (Colorado quarterback) Steven (Montez) get out of the pocket and create and extend some plays. I thought they also made a sense of urgency to get the ball to (wide receiver) Laviska (Shenault) and did a nice job in the first half. We made a little bit of an alteration (in the second half), going from some off coverage to, because of the deep ball threat they had shown, to more press man-to-man at the line of scrimmage, which I thought helped. I thought what was evident in the second half was keeping Steven in the pocket, making him work from the pocket, so he couldn’t get outside and gain vision and making him force those throws to be on time. It helped us especially on third down, and they went 1 for 7. There was a little bit of alteration in technique by our DBs in the second half and better contain.

On the physicality of running back Kenon Christon and his ability to run between or off tackle.

Helton: He’s the kind of kid that can handle a bunch of touches. He handled 16 on Friday night and didn’t look tired, he looked fresh. He can run any play in our offense. Actually, what I was more excited about was his natural catching ability. A huge part of this offense is to get dynamic athletes the ball in space.

Having not played Oregon for three seasons, how different do the Ducks look under second-year head coach Mario Cristobal?

Helton: Having a little chance to look at them on tape and watching last night’s game (against Washington State), you’ve always seen the dynamic of skill players at Oregon, there’s always been fast people, always been dynamic people. The thing that I think that Coach Cristobal has done a nice job is upgrading the offensive line. Obviously, he’s an offensive line coach by trade, and he’s done a nice job of recruiting that position. That group is doing a wonderful job. You saw last night how you look up and the running back (CJ Verdell) has over 200 yards rushing, and they controlled that line of scrimmage very well on that last (winning) drive. That’s the biggest thing that I see of what coach has made at the offensive line position.

Having seen a lot of first-year starters at USC, how does Helton compare Kedon Slovis to everybody else?

Helton: Usually at the quarterback position, you have a year or two of practices before you actually walk out on the field. Sam (Darnold) had a year before he went out there. Cody (Kessler) had a couple of years before he walked out there. What I’ve really appreciated (from Kedon Slovis) is watching him grow game-by-game. He actually learns game-by-game. If you watched the last two games, he’s done a really good job of extending plays, not forcing balls. You saw a lot of times how he held on to that ball a little bit longer and gave a receiver a chance to get open and then be able to get it to him. And then there’s time when he is so decisive.

The Trojans will resume practice on Tuesday afternoon on Howard Jones/Brian Kennedy Fields.