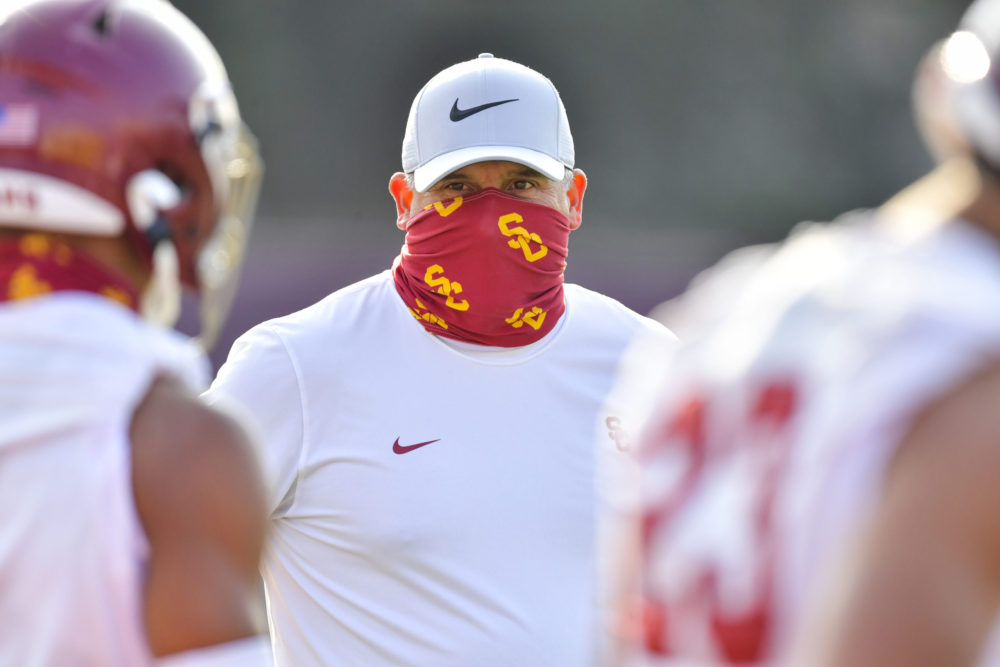 Wide receiver Gary Bryant Jr. suffered an ankle sprain and continues to sit out, though Helton said it was not a severe issue and he expects the true freshman to be ready for the season-opener against Arizona State.

Linebacker Tayler Katoa is another player dealing with a tight hamstring right now. Helton said he expects Katoa back on the field in the “very near future.”

It’s a similar situation for Kana’i Mauga, who also has a hamstring issue. Helton said they are anticipating getting Mauga back “very soon.” Mauga is competing with Ralen Goforth for the starting middle linebacker spot.

One player not expected back this season is defensive tackle Trevor Trout. Helton said Trout is continuing to deal with a back injury and will not be with the team this fall. Helton also said Trout could be a candidate to eventually take a medical hardship waiver.

He said both have done a terrific job of keeping schemes simple and not overwhelming players as they all contend with this shortened period of preparation.

Helton said Snyder has taken punter Ben Griffiths “to a different level” and also already has true freshman Parker Lewis competing for kickoff and field goal duty. Helton said Snyder is a “master of scheme” but that he’s also been really impressed with his technique and fundamental teaching of the specialists.

Helton said the specialists are “killing the ball right now.”

As for Orlando, Helton said he’s done a masterful job with the young linebackers, getting ready to play, but where he’s really shone is what he’s done with Palaie Gaoteote. Helton has said repeatedly that Gaoteote is playing at a completely different level than what he’s shown so far during his USC career.

Helton said the defensive scheme has worked well so far, and that’s in part because Orlando’s scheme fits the USC defensive personnel so well. He said he was pleased with last Saturday’s scrimmage, as the defense did not have a lot of mental busts and he didn’t see a lot of missed assignments from the defensive front.

Helton said the battle between the offense and defense starts with the Trojans’ two coordinators.

“The kids have brought unbelievable energy and I think it really has started with the coordinators,” Helton said. “I’ve got two guys that probably are the most two competitive souls I’ve ever been associated with…They’ve made it fun.”

In addition to Gaoteote, Helton also expects a big season from safety Talanoa Hufanga, and gives at least partial credit to this defense. Helton said this defensive scheme “really was made for Talanoa.”

Helton said the junior safety will be able to showcase his skill as a “post safety, a box safety and a flat zone defender.” Helton said Hufanga right now is between 210 and 215 pounds and running a 4.4. He said Hufanga can cover, hit, serve as a box player and even walk up between the tackles as a linebacker.

“He has special skill sets that are required for this system,” Helton said, adding that he sees this system bringing some new attributes out of Hufanga this year.

It’s so far, so good with defensive line coach Vic So’oto according to Helton. The USC head coach called what the new line coach has done with his position “extraordinary.”

“He’s a fundamental technician and a master of his craft,” Helton said.

USC has some young defensive linemen that are going to have to contribute this season following the loss of both Trout and Jay Tufele. That includes true freshman Kobe Pepe and inexperienced returners such as De’jon Benton and Stanley Ta’ufo’ou. Helton said he’s pleased with how So’oto has brought along those young players, and also mentioned that a few veterans are having the best camps of their careers, including Marlon Tuipulotu, Caleb Tremblay and Nick Figueroa–three players absolutely vital to the success of the USC defensive front this year.

Asked about any decisions regarding the offensive line, Helton said it was the same names standing out in that group. Alijah Vera-Tucker, Andrew Vorhees, Brett Neilon, Liam Jimmons and Jalen McKenzie still look like the best bets to start the season up front for the Trojans, while Justin Dedich and Liam Douglass are consistently mentioned right behind them. Helton specifically mentioned Jimmons as a player who has stood out this camp.

Outside linebacker Drake Jackson is going to be a huge part of this defense whenever he’s able to return from the hamstring issue plaguing him. But in his absence, the USC coaches have been able to get extended looks at Hunter Echols and Abdul-Malik McClain. Helton said now is the time for those two to put their resumes on film and that they were part of a successful pass rush in the first scrimmage.

Helton added that when Jackson returns, the Trojans will play whoever is playing the best at that position, but that there are looks where two outside linebackers are on the field at the same time.

Helton said this is “Hell Week” for the team, and the most physical week of fall camp. They’ve been in pads every day and will be in full pads on Thursday.

The Trojans will go to the Coliseum on Friday night, to give the newcomers a taste of the night atmosphere in the stadium, then they’ll be up at 6 am on Saturday in order to test and prepare for a morning scrimmage, as again the Trojans try to simulate the environment in which they’ll take on Arizona State on November 7.

Helton said they will look to get in about 75 scrimmage plays on Saturday, after getting around 60 last week.