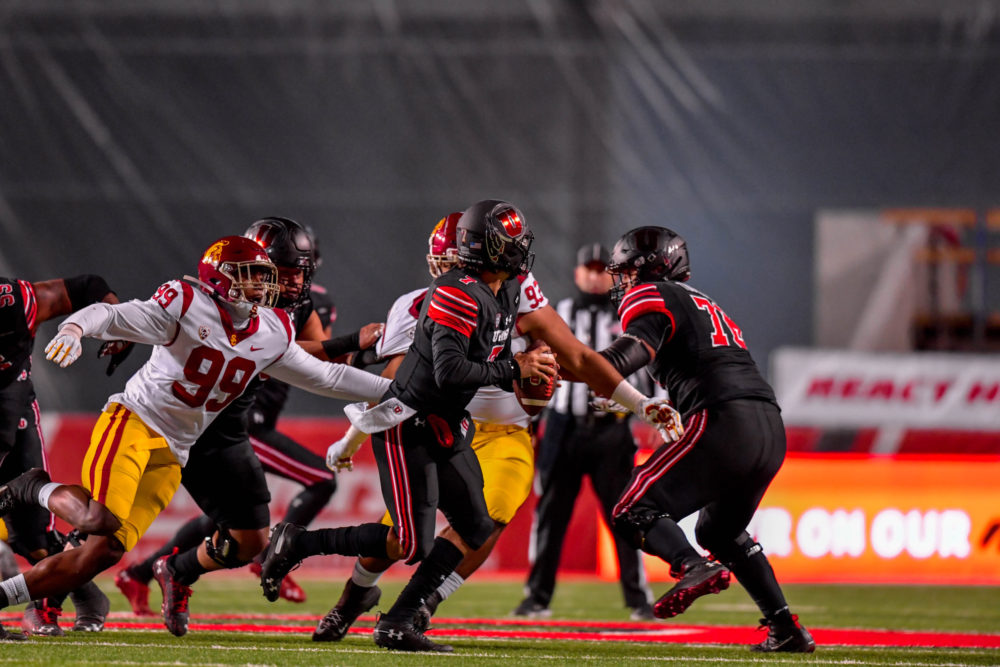 USC head coach Clay Helton provided some thoughts on USC’s 33-17 win against Utah, including more praise for several standout defensive linemen, a nice game from the linebackers and injury updates on some key players.

Praise for the defense

Clay Helton called this an important win for the football team and said he was proud of the mindset of the team.

“I thought they brought a mental toughness to this game, great energy,” Helton said. “The positives on the night, I thought a lot of them went to our defense.”

Helton said they came into the game with a point of emphasis of stopping the run. Utah had 119 rushing yards on 28 carries, but a majority of those came on three runs of 22 yards or more. Without those three, Utah picked up just 35 rushing yards on its other 25 carries.

“The defensive calls that TO made I thought were extremely aggressive, especially on normal down and distances, and held usually a really good Utah rushing game to 119 yards rushing,” Helton said.

He called the five turnovers “huge” and said they were set up by the pressures. Though USC finished with three sacks, Helton said the defense pressured the quarterback and got him off his spot several more times. The USC defense also held Utah to just three-of-11 on third-down conversions.

Helton was also proud of the way the Trojans played in the second half, coming out with the ball and getting a field goal on the opening drive to push the lead to 10, and also shutting out Utah for the entire second half.

Defensive lineman Brandon Pili played in his first game this season as he’d been dealing with a broken finger. Helton said there were no setbacks with him.

Center Brett Neilon played against Utah after missing the Arizona game while dealing with a sprained ankle. Similarly to Pili, Neilon also suffered no setbacks against Utah.

Linebacker Ralen Goforth suffered a plantar fascia strain, which Helton will provide a further update on later in the week. The linebacker unit is already stretched thin as linebacker Palaie Gaoteote remains in concussion protocol after not playing against Utah. If Goforth can’t play against Colorado, USC could be down to just Kana’i Mauga, Raymond Scott and Tuasivi Nomura at inside linebacker.

Running back Markese Stepp sat out the game with a chest strain and Helton said they would see where he is at during the week. Fellow running back Stephen Carr also had an injury and was going to be limited against Utah. He played a couple snaps but took a knee to the back of his head and came out of the game for good.

USC did not have defensive end Caleb Tremblay available against Utah. He’s been dealing with stingers and missed the Arizona game as well. Tremblay dressed for the Utah game but did not play. Helton said he hopes Tremblay will be available this week.

Helton said he liked the mindset that Mauga and Goforth brought to the game and that Mauga set the tone for the entire game, making the first two tackles of the game. He said both played smart, phyisical and disciplined football throughout the game and stepped up in a big way for the Trojans.

“He’s been Mr. Consistency all the way through camp,” Helton said, adding that Figueroa has been the hidden gem of the first half of the season. “He’s the one who showed up every day and did his job every day.”

“He’s playing at an All-Conference level over the first three games,” Helton said.

He also had praise for Marlon Tuipulotu, who has made some major plays during these first three games and had another one on Saturday, with a sack and forced fumble that led to USC’s first touchdown. Helton was asked about defensive line coach Vic So’oto and his impact on what has been a good position group for the Trojans up front.

“He brings an unbelievable knowledge of the game, tutelage of the game, but I think he makes it fun for the guys,” So’oto said. “He brings great energy and those kids love playing for him.”

Helton said Marlon Tuipulotu “might be the best defensive player in our league right now, the way he’s playing.”

True freshman kicker Parker Lewis was one of USC’s stars of the game, as he made four field goals and scored all nine second-half points in the game.

Helton praised Lewis’ ability to shake off the miss from last week and put together a great game.

Offense still with room to grow

Helton said there’s still room to grow in terms of offensive production, despite scoring 33 points against what is typically a good Utah defense.

“I really thought we had a chance to put the game away in the first half,” Helton said of what he told the coaches after the game. “It could have been a 31-10 ballgame.”

Helton said the Trojans did a good job to capitalize on the first turnover, but got another turnover on the 27-yard line. From there, the Trojans were penalized for holding on a long touchdown run and then threw an interception.

“That was my biggest takeaway on the first half was I thought we could have ended the game really in the first half and we didn’t take that opportunity,” Helton said. “That’s why I thought that opening drive of the second half was so important to get it to a two-score game.”

Helton said he thought this was the most rhythmic game the offense has had, but “there’s still meat on the bone” in terms of growth.

“This is a high-powered offense with a lot of good skill players and hopefully we can continue to gain rhythm and gain points because I truly believe this can be a 40, 50-point offense a game,” Helton said.

Helton said in this particular game he felt the USC offense got behind the chains a bit, which caused some longer third-down situations rather than the third-and-short and third-and-medium situations they’d seen in the first two games.

Helton said he thought the offense was better in the second half, but said the offense is not a finished product at this point and “that’s a good feeling because you know there’s advancement to be had.”

On the offensive line

Helton said he liked the way the USC offense line got a push against the Utah defenders in the run game, but said he thought Utah’s front players did a nice job in their pass rush.

“Better than what we thought it was going to be,” Helton said of Utah’s ability to get pressure on Kedon Slovis. “I thought they did a nice job of pass rush.”

Helton said one of the three sacks was a coverage sack, but two were physical beats.

“The numbers don’t show it in the run game, but I thought the run game was productive for the number of times we handed it,” Helton said. “We were able to push them off the ball, did a nice job down at the goal line with a short-yardage one, a third-and-one run. They did a nice job of controlling the line of scrimmage.”

Helton said tight end Jude Wolfe has been battling an ankle injury and that flared up again. He also said Josh Falo is “back with us now” after adding a baby girl to his family.

“You’ll see more of a rotation about it,” Helton said. “Trying to get Jude fully healthy. It’s hard to be that kind of athlete and battling an ankle.”

Bru McCoy started the game at wide receiver and played a healthy amount throughout the game. Helton said McCoy started over Tyler Vaughns because Vaughns missed a couple practices early in the week and because McCoy practiced all week, Helton felt he deserved to start the game.

“It was nothing Tyler did,” Helton said. “Bru had practiced all week and Tyler didn’t, so he deserved to go out there.”

Helton said both receivers “made big plays in the game.”

Kenan Christon had a 47-yard run and Helton said he feels the sophomore tailback is going to get more opportunities moving forward. Christon has been put back as a kick returner in another effort to get the ball in his hands.