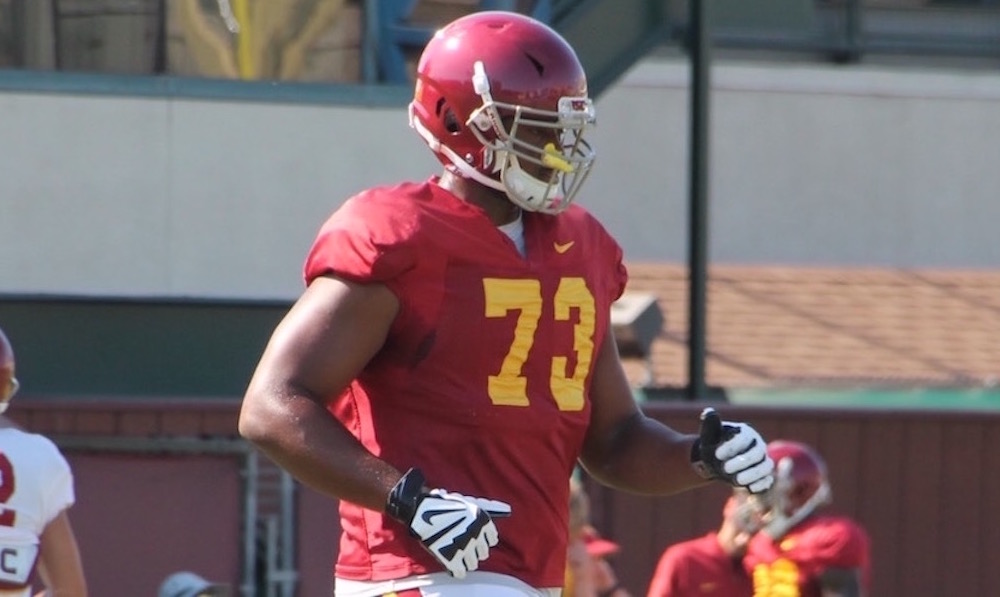 There has been so much focus on Sam Darnold coming into the 2017 season, and deservedly so, but after one week of USC fall camp drills it’s pretty apparent that the Trojans have built a pretty impressive collection of running backs to help create the balanced offense that Clay Helton wants.

Helton stated after one of the early camp practices that his goal of an 80-play offensive game would be 40 runs and 40 passes. Normally I would have no problem tilting those numbers in favor of Darnold but the reality is that a running game capable of putting up 200 yards or more every week is so valuable in helping to open things up even more for Sam, and the Trojans certainly seem to have that.

Leading the way you have the veteran junior in Ronald Jones, a returning 1,000-yard rusher who has matured both as a player and a person. He’s physically bulked up to 207 pounds, 10 pounds heavier than last year. He’s accepted the challenge from Helton to improve his pass-catching skills in order to becomes a complete back, and he made an impressive sideline catch for a touchdown with John Houston draped all over him to show that improvement. And he’s become comfortable in his role as a team leader, more vocal. He talks about how he once went to Justin Davis for advice and now the young guys come to him. He’s seems as ready as can be to be the lead back for the Trojans.

Then you have the freshman who has made quite an impression in Stephen Carr. Early on it was his pass catching skills, honed well on the 7-on-7 circuit. You noticed the 200-pound frame, the hard running style. And then the full pads came on Saturday and he put on a show with a trio of touchdown runs that showed the vision and cutback ability that you rarely see in a running back these days. What Stephen did on Saturday was very reminiscent of what Reggie Bush did the first day of full pads when he was a freshman, when Reggie went out and sent a message of what was to come.

Vavae Malepeai has also shown that he is ready to be a contributor. It looks like Vavae is being used as the power back option but the great thing about him is that he’s also a very good pass catching option who is pretty fast. We’ve seen a versatile fullback be used so well by the Trojans in recent years with guys like Stanley Havili and Malaefou MacKenzie, and even though Vavae isn’t being used in a traditional fullback role there are a lot of similarities in his game.

One guy we haven’t seen a lot of is Aca’Cedric Ware, but when he does go it reminds you not to forget about him. Ced is another guy who can be a power option. We seen Dominic Davis get some work and I still think he could be a dangerous guy if needed but right now it just seems like he’s sitting in the #5 spot of the rotation, which shows how deep the Trojans are.

There might not be a player on the Trojan roster with more opportunity in front of him than Jackie Jones, who has a chance to earn starting spots at cornerback, kick return and punt return. There’s no doubt that Jackie brings the dynamic skills to the table (Cam Smith called him the fastest guy on the team) but one of the biggest things the coaches were watching this fall was to see his mental approach to the responsibility that comes with that kind of role.

So far the results have been positive and both Clay Helton and Clancy Pendergast have acknowledged the maturity and approach that Jones has shown through the first week. That’s no small thing, especially with Pendergast, who places so much emphasis on his comfort level that a player understands his assignments and adjustments.

There’s still work to be done before Jackie secures those spots, he’s facing a challenge at corner from Jamel Cook although it’s safe to say that Jackie is likely to hold the spot unless something really changes. He would have to be considered the favorite for the return roles too but there are others like Velus Jones (Jackie calls him “blazing” fast) and Deontay Burnett who could offer a challenge.

I’m very impressed with what I see from the freshmen so far. Here’s a few that really stand out:

OT’s Austin Jackson and Andrew Vorhees: These are two physically imposing guys and they look the part as bookend tackles of the future. Jackson has a frame that compares favorably in size to what Tyron Smith looked like when he showed up on campus, and you’re talking about a guy who is considered the best tackle in football right now. Vorhees is fundamentally solid and strong.

TE Erik Krommenhoek: I didn’t expect to see this kind of pass catching from Krommenhoek but he’s certainly shown it. His strength as a player is his blocking and that will only show more as camp goes on with the scrimmages, that bodes well in a very strong start for Erik.

WR Randal Grimes: Joseph Lewis was the one with the #1 ranking but so far it’s been Grimes who has made more plays. Randal showed up with more bulk since his senior year of high school and you can see some JuJu while he wears #9 with his tall, long frame.

DL Jay Tufele: It was Marlon Tuipulotu who made an impact in spring and now we’re seeing Tufele come in and show that’s he’s going to be legit too. Jay just has such good size and moves so well.

LB Levi Jones: Levi is going to be a good one.

CB Greg Johnson: Very aggressive with the athletic skills to back it up. There are some guys who catch your eye early with their style of play, Johnson has been one of them for me.

Safeties Isaiah Pola-Mao and Bubba Bolden: They came in being touted as the big hitters of the future and you can definitely see it. They have size, they are quick and they are looking to hit.

Here are some thoughts on a few younger guys on the defensive side of the ball.

LB John Houston: This is a physically different John Houston than we’ve seen in the past. He’s always been a sleek athlete who can move sideline-to-sideline but there have been a few big hits this week that tell me John is ready to be the starter. Helton also talks about his ability to cover as being a strong suit, especially in a conference where so many offensive players can turn into pass receivers. John talked this week about how it took patience to wait two years for his shot but the development time looks to have paid off.

OLB Oluwole Betiku: Wole has been getting closer and closer to having it all come together. He was doing a bag drill by himself after practice one day this week and it was right in front of the media area. There’s no other way to describe it other than violent.

DB Ykili Ross: It appears as if Ykili may have found a home at slot corner, where he’s been lining up behind Ajene Harris. He can still play safety if needed but there’s always going to be a need for guys who can cover and Ykili looks like he’s ready to be part of that rotation this year.

S C.J. Pollard: We talked earlier about how Clancy likes guys who know the playbook, like the way he referred to film study leader Chris Hawkins as a consummate pro. Pollard is in that similar vein and he was with the 1’s on Saturday when Marvell Tell was held out of action.