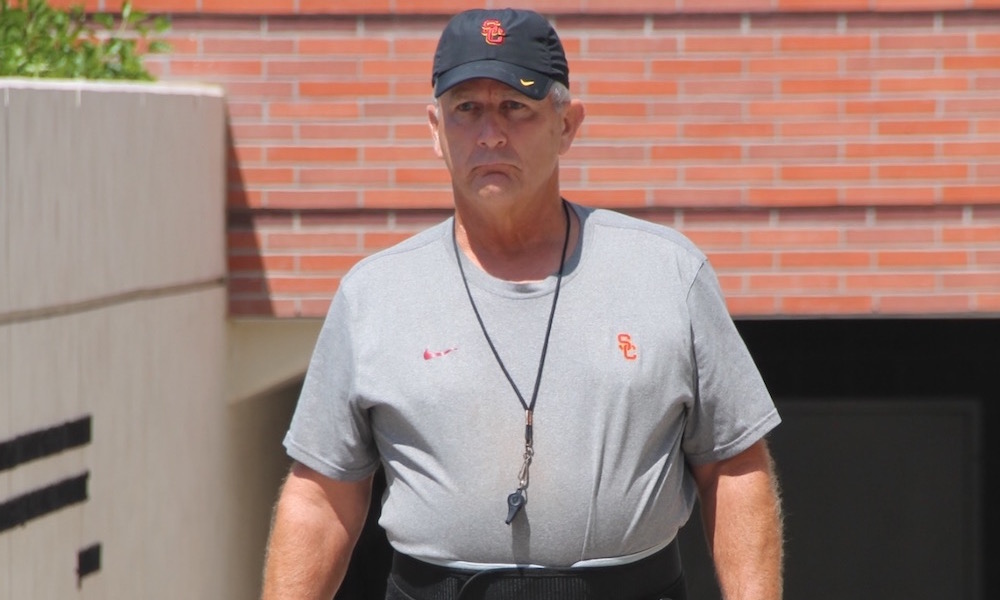 Last spring Clay Helton talked about the importance of the young wide receivers stepping up into the reliable roles created by the departure of JuJu Smith-Schuster and Darreus Rogers, and so far it looks like Tyler Vaughns is going to fill one of those spots. We know that Deontay Burnett is set at one starting receiver spot and it has been Vaughns who has consistently shown up through the first two weeks not only with the occasional special play but with the intermediate-to-short game catches as well. Tyler uses his long arms to his advantage as a pass-catcher and he’s added 10 pounds to his slight frame since last year.

“Tyler is doing a really nice job,” USC head coach Clay Helton said. “He’s been one of the more consistent kids out here over the last two weeks. If we were playing this Saturday, he would have to be out there and be a major contributor.”

Helton also talked about the size of this receiver group as something that is notable in camp.

“I look at Michael Pittman, who’s 6-foot-3-plus, a Tyler Vaughns who’s 6-2-plus…Joseph Lewis is almost 220 pounds right now – I mean a huge person. Randal Grimes is 215. So, you know, there are some big bodies out there. I look at a guy like Deontay Burnett, he may not be the biggest guy in the world, but he’s so productive. And we do things offensively and schematically to be able to get guys open, whether it’s putting them in motion, stack them – be able to get hands off of them. But you look out there and there’s a bunch of big guys too.”

We’re starting to see a defining of the running back rotation and roles. Ronald Jones is the clear cut starter and Clay Helton has talked often about him becoming an everydown back this year, one who can get 20 or more touches per game. Stephen Carr has captured the attention of the coaches with his playmaking, he’s broken off a big play in each of the first two scrimmages so far, and it’s easy to imagine him moving into the #2 spot at some point in the near future. The one who would probably have the most to say about that is Aca’Cedric Ware, a veteran who can be productive, so we’ll be paying attention to those two in order to see how things shake out. Vavae Malepeai looks to be the focus of short-yardage and goal line situations, and he can also catch the ball well too. Dominic Davis appeared to be the odd-man out in the rotation, that reality was recognized and Dominic has moved over to corner to give things a shot on the defensive side of the ball.

One of the reasons I like seeing this rotation getting established so early is that the offensive line has yet to be settled, and the Trojans are going to need to get the run game going from the start in order to help balance the offense for Sam Darnold and the passing game. The OL rotation should be set following the Saturday mock game so that gives two weeks until the opener for some increased synergy in the run game.

Based on what we’ve seen so far I still think the OL will end up being Toa Lobendahn at LT, Chris Brown at LG, Nico Falah at center, Viane Talamaivao at RG and Chuma Edoga at RT. Toa has also seen a lot of reps at center, with Helton saying they wanted to have Toa ready to play center in case he was needed. After the Saturday mock game, however, chances are he will be sticking at LT. One guy who I think has helped himself in that scenario is Clayton Johnston, who has been taking the 1st team reps at LT when Toa is at center, and the #2 reps overall. The reason that’s notable is Austin Jackson, as it would have been very easy to put Austin out there right away to see where he’s at, but Clayton has played well enough to stay in that spot.

“Clayton put on some good weight over from December to now,” Helton said. “He’s put on about 20 pounds and he’s still kept his athleticism, and he feels comfortable on that left side. We’re giving him a good look, so he and Toa are going with the ones and kind of double training at that tackle position. When Toa is in at center, he’s going [at left tackle], and then when Toa comes out, he getting to play.”

“I think 42 right now, Uchenna [Nwosu], has kind of captured that defense along with Cam [Smith] and Porter [Gustin] – kind of that triangle right now just jumps out to me. In the back end I think Chris [Hawkins] has been a natural leader in the back end of the defense too. But those kind of three have captured our front – Uchenna, Porter and Cam.” – Helton talking about leaders emerging on defense