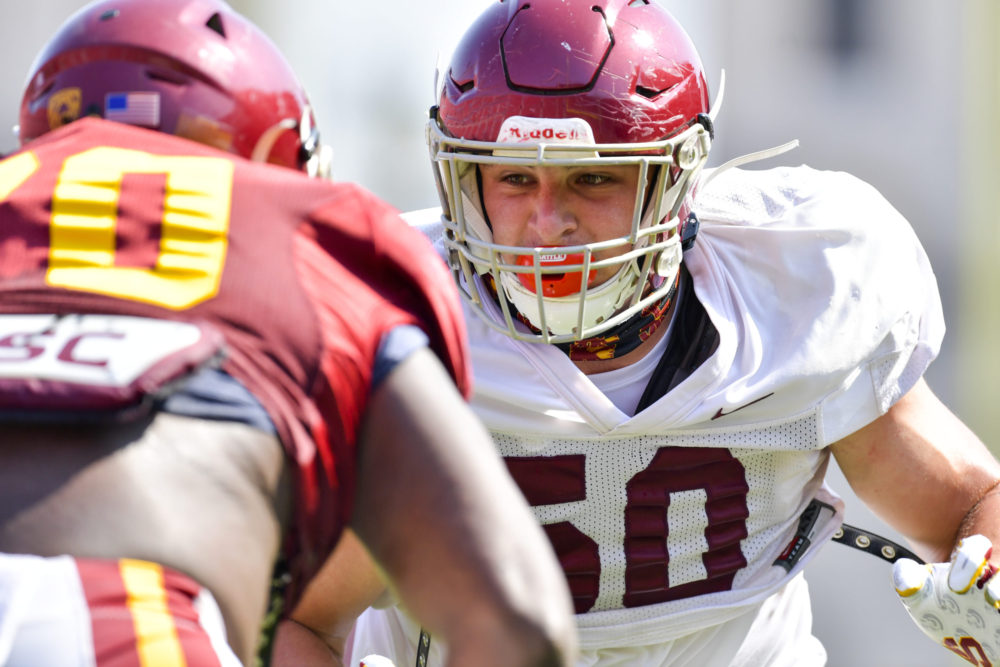 Nick Figueroa led USC in sacks and tackles for loss last season, and while he didn’t exactly do it with one arm tied behind his back, it might not have been that far off.

A labrum injury in his shoulder had been nagging at Figueroa since he arrived at USC prior to the 2019 season. He called it a common injury and one that was inoperable at the time. Last season, a sleeve helped him deal with the pain, but he said it began having something of an impact in the Week 2 game against Arizona. Figueroa pushed through the season, delivering 20 tackles, including seven tackles for loss and 3.5 sacks in six games — the first six starts of his college career.

“I just tried to go out there and do my job,” Figueroa said of becoming one of USC’s most impactful defenders last season. “I was blessed to have a bigger role on the team and thankful that I was given that opportunity. I just want to try to continue to take advantage of that.”

He credits a major change in perspective to his improved play on the field.

“Just realizing the type of success that leads to on-field success,” Figueroa said. “It’s all-encompassing. Guys that do well on the field, do well in the classroom, do well in other aspects of life.”

Figueroa had offseason surgery on his shoulder and sat out spring practice while recovering. Now, fully recovered and back to 100% health, Figueroa said he’s glad to have gone through that process and what he called a good offseason.

“It feels great now,” Figueroa said of his shoulder. “That was a new challenge. Getting back from that was a good process.”

Figueroa had been a practice field standout during his time with USC, so it was noticeable with him on the sideline and going through rehab this spring. He said rehab included a lot of running and exercises that stayed away from his shoulder. But he’s been able to lean into the summer conditioning led by USC Director of Football Sports Performance Robert Stiner, and is another player to rave about the work being done this offseason.

“I love coach Stiner and his staff and the stuff they’ve been having us do,” Figueroa said. “It’s incredible.”

“I was looking at those photo memories,” Figueroa said when asked about the difference between this summer and last. “This time last year we were just moving into the dorms or figuring out if we were going to have a season. It’s so night and day I can’t even really tell you, because it was like there wasn’t even an offseason last year.”

The USC defensive line will look a bit different this year without Marlon Tuipulotu in the middle. The Trojans will also be without Brandon Pili, missing the season after tearing his Achilles tendon during spring ball. That means the spotlight will shine brighter on Figueroa, who, in one shortened season, goes from a first-time starter to the most veteran player at his position.

“I’m starting to feel old,” the 21-year-old Figueroa said, making sure to reference that punter Ben Griffiths will be 30 this year and that other prospects from his high school graduating class are 23. “It’s only my third year here and I feel old. It’s good though. I’m hoping I’m taking that role of being a vet in a way that it’s giving the young guys someone to look towards, the same way I had it with guys who just took care of business.”

Figueroa’s role as a leader will be easier for him when he gets back on the field, though he said he’s tried to serve as a sounding board for the younger guys with any subject, ranging from relationships to careers to football and anything in between.

“I want to be someone who is accessible to young guys because I know when I was in that situation it was a lot to take on at once,” Figueroa said. “I’m just trying to be a guy they can come to. My style is I just try to do my job and show that doing the right things and doing what people say, you’ll get to success, and that’s a path I try to follow.”

Figueroa will have any number of young defensive linemen to show the path. Second-year end Tuli Tuipulotu will be expected to build on a terrific true freshman season. Interior players Kobe Pepe and Jamar Sekona have shots at playing time this season with the opening at defensive tackle. Ishmael Sopsher has a couple years at Alabama under his belt, but he’s only seen action in one game. And incoming freshmen Colin Mobley and Korey Foreman will be looking to make quick impacts. The duo of 2020 big men, in Pepe and Sekona, plus the nation’s No. 1 overall 2021 prospect, Korey Foreman, are especially intriguing players along the line this fall.

Mobley and Foreman have impressed Figueroa early on.

“They’re just coming to work,” he said of the freshmen. “I’m really excited for both of them to mature and grow, fill into their bodies a little bit, getting their strength program. Both of them definitely hit the ground running…They’re both great kids and I think they’ll do really great things this year, and throughout their careers as Trojans.”

As for himself specifically, Figueroa said there’s “a little bit of everything” that he’s looking to improve upon this season. Staying healthy is one of the things at the top of the list, repeating one of So’oto’s saying: “You can’t make the club in the tub.”

“Being a complete player,” Figueroa said. “Not showing up and doing well three plays then having a bad play. Maintaining consistency and health and I think for me, he’s trying to really stick me to that leadership role because we lost a few older guys after last season.”

USC lost some impact defensive players in Tuipulotu, safety Talanoa Hufanga and cornerback Olaijah Griffin, as well as some depth up front in Caleb Tremblay and Connor Murphy. But Figueroa sees plenty to work with when he looks around the position and team meeting room, and the expectations are turned up another few degrees from last season.

“We want to be one of the top-ranked defenses,” Figueroa said of what he sees for this Trojan unit this year. “We have so much talent on this team, I don’t even know where to start. Every single room is just loaded with talent, so I think it’s just putting that together. And I want to win. I think that’s everyone’s mentality. I don’t care what I do. Whatever I can put towards this team winning, that’s what I want and that’s what everyone wants, too.”