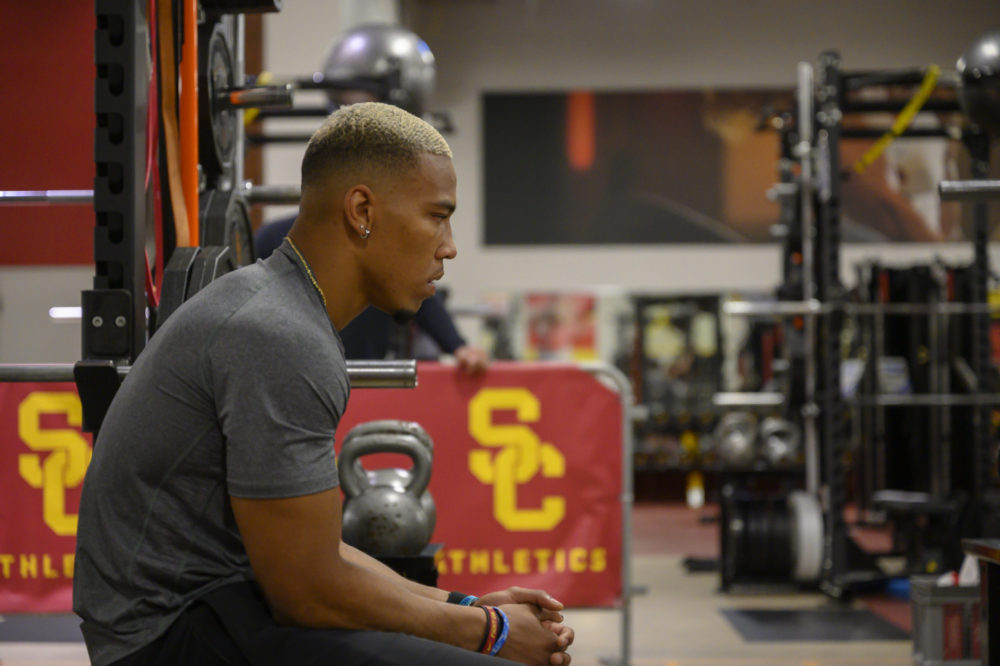 USC will add to some of its historic NFL Draft numbers beginning tonight and throughout the next three days. Up to seven former Trojans could hear their names called during the 2021 NFL Draft, which would be the most since nine USC players were taken in the 2011 draft.

USC fell behind Ohio State in the race for the most-ever first-round picks last year, but the Trojans will add another to its total and stay well clear of No. 3 Notre Dame. But the Irish could overtake the Trojans in terms of total number of draft picks, as the two are tied at the top of the list with 511 now, but Notre Dame has a chance to have 10 players selected this year.

Here is a look at the seven Trojans who could be selected over the next three days.

The player they call AVT is an absolute standout from USC. He’s been projected to several different teams somewhere in the middle of the first round, with the latter half of the opening round looking like his floor. The Chargers, Vikings and Raiders have been linked of late and Vera-Tucker can play both tackle and guard, which is exactly what the Minnesota Vikings need. The Raiders are in Las Vegas now, but Vera-Tucker is a Northern California native and that would be a fun player-team pairing. Vera-Tucker’s most notable trait is that he is incredibly athletic for an offensive lineman. This will be the second year in a row an offensive tackle is drafted from USC in the first round. Austin Jackson went No. 18 overall to the Dolphins in 2020.

Tufele is a defensive tackle that brings strength, speed and explosivness. Tufele is a 315 pound, 6’3 wrecking ball. However, he will need to gain control over his stellar skill set upon entering the NFL. As a former rugby player Tufele is an explosive force and one of the quickest off the draw after the ball is snapped. He had 41 tackles and 3.5 sacks in his 2019 season at USC before opting out of the 2020 season due to pandemic-related concerns. Regardless, Tufele is projected to go in the second round. There is a chance that Tufele could be the highest-draft USC defensive lineman since Leonard Williams went No. 6 overall in the 2015 draft.

If the NFL’s mock draft is right than USC favorite Amon-Ra St. Brown will be going to the Dallas Cowboys in the fourth round. St. Brown was a favorite target of Kedon Slovis during his Trojan tenure. St. Brown was a stud right out of the gate as he recorded seven receptions for 98 yards and a touchdown in his first game. He earned All-Pac 12 honors following a stellar junior season. St. Brown has it all with a combination of speed, vertical ability and soft hands to bring in those tough catches. St. Brown looks to continue a rich history of USC receivers in the NFL and will make it two years in a row with a Trojan receiver selected in the draft, after Michael Pittman went in the second round last year.

Hufanga is a strong safety projected to go in the fourth round. He’s a smart player with quick athletcisim who always seemed to find himself in the right place at the right time on the field. He was considered the backbone of the Trojans 2020 defense and named the Pac-12 defensive player of the year. Hufanga looks to become the first USC safety drafted since 2019 when the Indianapolis Colts drafted Marvell Tell in the fifth round.

Although projected fourth-round defensive lineman Tuipulotu’s first season was plagued by injury, he rebounded for an excellent sophomore season recording 46 tackles and two sacks. By his 2020 junior season at USC, he earned All-Pac 12 honors with 23 tackles and two sacks over his six starts. As a former wrestling champion in high school it’s no wonder Tuipulotu is such a force in bringing down offensive players. Tuipulotu has deep USC roots as he is a cousin of the aforementioned Hufanga and his brother Tuli is a freshman defensive lineman this year. Another recent notable USC draftee on the defensive line is Rasheem Green, who signed a four-year deal with the Seattle Seahawks.

Although Vaughns redshirted his first season at USC due to a stacked receiving corps that featured JuJu Smith-Schuster, he was a solid force over his next three seasons. Vaughns caught passes from current Carolina Panthers quarterback Sam Darnold and finished his Trojan career this past season on the receiving end of Kedon Slovis. Vaughns was the 2019 USC Offensive Perimeter Player of the Year, while also leading the conference in punt return average during the 2018 season. Vaughns earned second-team all-conference honors in 2020 after starting five of six games and brings a solid, reliable skill set with a willingness to block to any team that drafts him. While Vaughns doesn’t appear on all draft projections it will be interesting to see where he goes. Vaughns could become the seventh USC receiver drafted since 2013, after St. Brown joins Robert Woods, Marqise Lee, Nelson Agholor, Juju Smith-Schuster and Michael Pittman Jr.

Griffin may not be projected to be drafted in all mock-drafts, but the cornerback could be a late-round steal. The red flag surrounding Griffin is that he only had one interception during his time with the Trojans. However, numbers don’t always tell the truth as Griffin is an elite athlete with unlimited potential. He is aggressive and can change direction. He as everything you could want in a cornerback as long as teams can overlook that one glaring statistic. Griffin is also the son of west coast G-funk pioneer Warren G. USC last two cornerbacks selected in the draft were Iman Marshall in the fourth round of the 2019 draft and Adoree’ Jackson in the first round of the 2017 draft.

California legend Snoop Dogg gave Griffin the advice, “Stay focused on your job. It’s not a game, it’s a job. Love you brother. You make me proud every time you lace up. Take that swag with you to the NFL.”