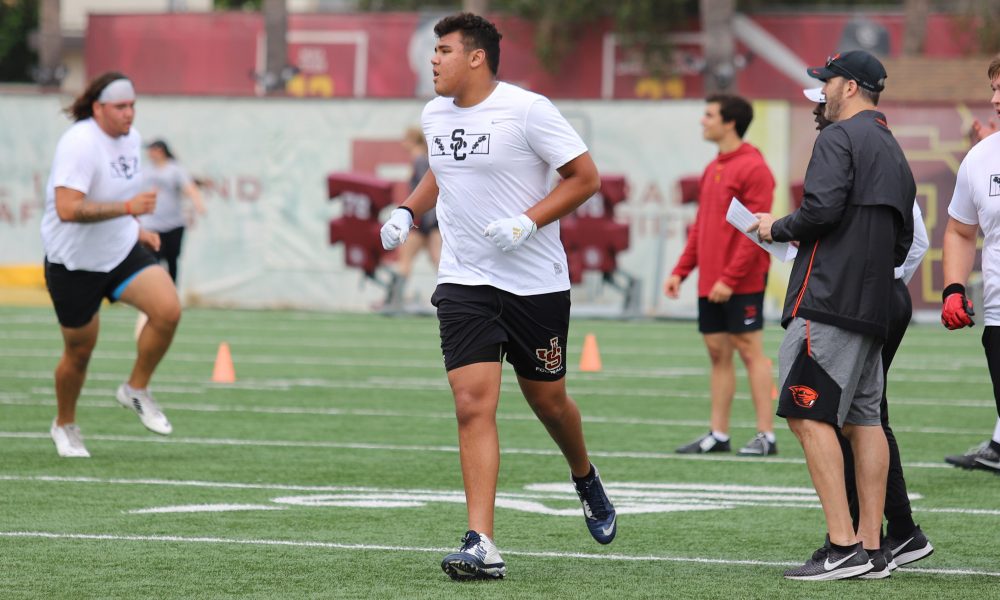 USC was the beneficiary of some good planning and good luck this weekend, as the Trojans took advantage of having a number of elite junior recruits on campus by showcasing the recruiting ability of the new defensive football staff, as well as treating the recruits to a basketball rivalry game with an exhilarating ending.

One recruit in attendance was 6-foot-5, 290-pound offensive tackle Mason Murphy (San Juan Capistrano, Calif./JSerra), who has been a top USC target along the offensive line since he picked up an offer following a Trojans’ camp last summer. Murphy’s main contact at USC has been offensive line graduate assistant Viane Talamaivao, but this weekend, he was offered an opportunity to interact with the rest of the staff, including the new hires on the defensive side of the ball.

Last week, defensive coordinator Todd Orlando, safeties coach Craig Naivar, cornerbacks coach Donte Williams and defensive line coach Vic So’oto made their feelings about recruiting abundantly clear–that they would bring an energy to recruiting unmatched by any other program–and that was on display this past weekend.

The USC staff said they would recruit as a complete group, and nothing proved that point more than a photo Murphy posted to twitter, of him surrounded by virtually the entire USC coaching and support staffs.

Murphy estimated that there were between 30 to 40 recruits in attendance and they were able to take in USC’s last-second basketball win against UCLA, thanks to a Jonah Mathews three-pointer with one second remaining.

“That was crazy,” Murphy said.

USC coaches stressed how important it will be to lock down the Los Angeles and greater Southern California areas, and Murphy said that message was received loud and clear, as the Trojans’ coaches extolled the benefits of staying close to home at the next level.

But it seemed the thing that stood out most to Murphy was the feeling around the new coaches at USC.

“In the weight room, there was a different type of energy,” Murphy said. “I asked one of the players about it and he said a few months ago it wasn’t like this. The new coaches brought a new vibe.”

While the uncertain job status of Clay Helton seemed to hang over the entire 2020 recruiting cycle, USC certainly hopes that is not the case with this 2021 group. Murphy said that while the possibility that Helton could be fired still exists in the back of his mind, it isn’t something that is a true concern anymore.

“Coach Helton’s job is secure,” Murphy said. “That’s what it sounds like and what it looks like. I don’t think it’s a real concern anymore, for me…It doesn’t really affect the way I’m feeling.”

Moving forward, Murphy would like to commit as soon as possible–or at least as soon as he feels ready–but he’ll take some official visits first. His first will be to USC, for the Trojans’ Spring Showcase on April 11. He also said he’ll take an official to Washington in late May or early June.

Discuss this story on the WeAreSC Recruiting message board