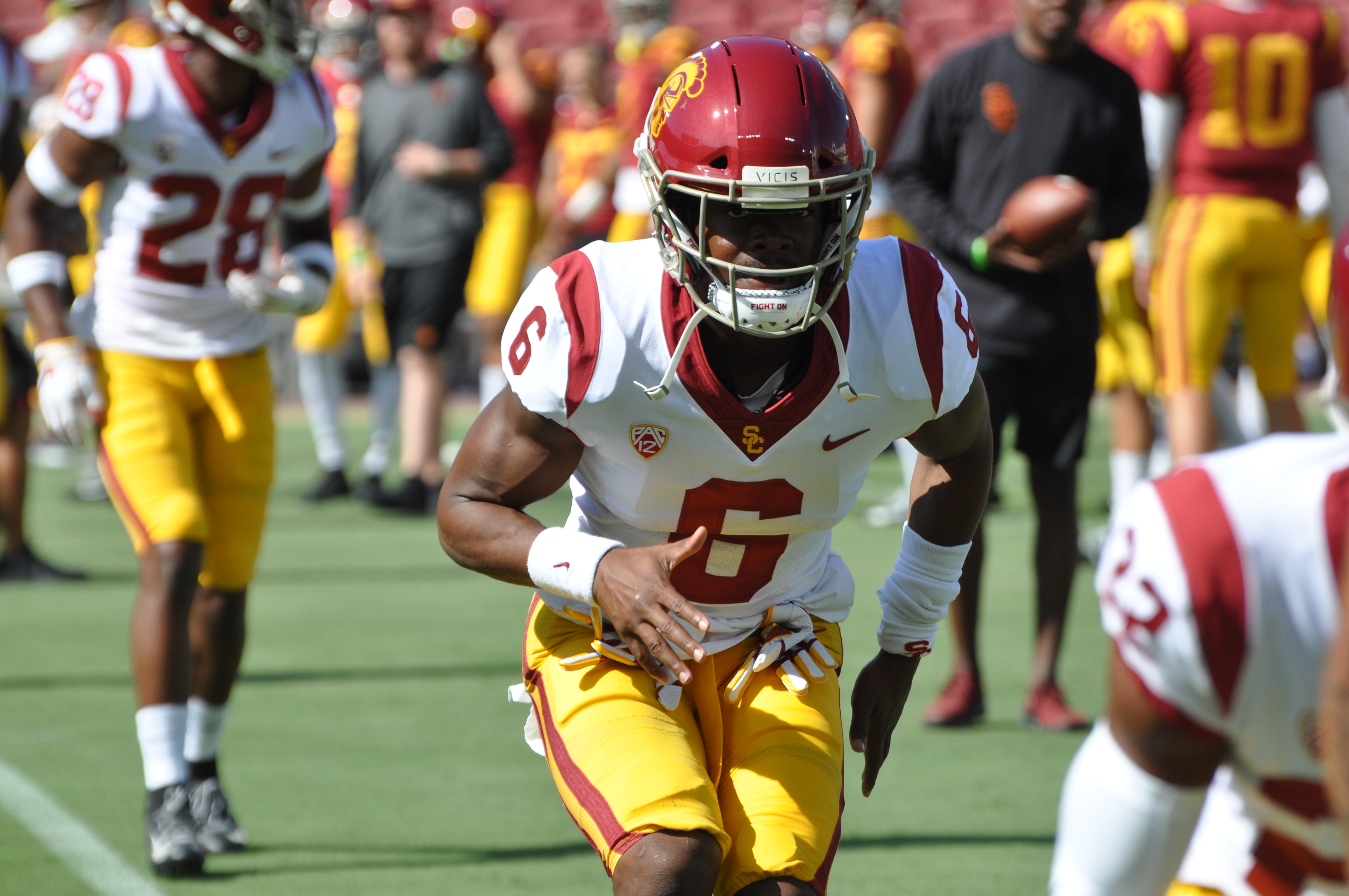 The constant roster turnover of college football is one of the things that makes it so fun to follow. Every year brings a new mix of veterans and inexperienced players, as fans hope the returners can take the next step in their progression, while fresh faces provide a boost that leads to a successful season.

The Trojans will rely heavily on returning starters like wide receivers Michael Pittman, Tyler Vaughns, and Amon-Ra St. Brown, left tackle Austin Jackson, defensive linemen Christian Rector, Jay Tufele, Marlon Tuipulotu, and linebacker John Houston, among others. But they’ll need a significant shot of production from more than a handful of players who are looking for their first taste of extended action. Here is a look at some of the Trojans who USC fans should get to know, as they could help tell the story of the 2019 season.

Stepp played in just four games as a true freshman in 2018, allowing him to use his redshirt year. He’ll see the field plenty this year, despite sharing running back duties with two upperclassmen in Vavae Malepeai and Stephen Carr. Stepp is all of his listed 235 pounds, and is an absolute chore for defenders to tackle alone. He is a tremendous short-yardage back, but he can play all three downs now after showing some marked improvement in catching the ball out of the backfield. Stepp is a throwback tailback and USC fans will appreciate his running style.

Maybe it’s a stretch to call Williams a new face, considering he played in all 12 games last season. But this year, he’s poised to make last year’s numbers (four receptions for 87 yards and a touchdown) feel like a pre-game warmup. He still doesn’t catch the ball as reliably as some of the veteran receivers, but he is capable of the spectacular, and has the 6-foot-4 frame and athleticism to provide a matchup nightmare for opposing defensive backs. It won’t be easy to find a ton of catches with so many talented receivers, but Williams is absolutely a name to know heading into the season.

Speaking of talented receivers, the three true freshmen most likely to make an impact all deserve mention.

Jackson greyshirted in 2018, attending junior college part time in order to enroll at USC in the spring of 2019. Not only did he immediately make an impact during spring ball, he played so well that it felt like he was a veteran when fall camp opened. A hamstring injury kept him off the field for some time during camp, but he’s back now, and should be an integral part of the wide receiver rotation as a true freshman. There are so many established weapons at wide receiver, in Pittman, Vaughns, St. Brown, and even Velus Jones, but with needed numbers at the position to effectively run the Air Raid offense, Jackson will be called upon plenty this year. He is physically impressive for a true freshman and is beyond his years in terms of his ability to reliably catch the ball.

McClain and London walked similar paths this fall. Both not regarded as highly as the other two receivers in the 2019 recruiting class — Kyle Ford and Bru McCoy, who haven’t yet practiced due to injury or illness — McClain and London simply walked out onto the practice field making plays and never stopped. These are two more big-bodied receivers added to the mix who will see the field as true freshmen.

The tight end spot looks good at the top, with Erik Krommenhoek and Josh Falo, but Wolfe has been impressive through spring ball and fall camp. He looks the part physically and is capable as a blocker and receiver. It would be surprising if he put up big numbers during the year, but he’ll be a factor as important depth at the position.

The starting left guard stepped in on the first day of spring ball and has left no doubt who should fill the spot vacated by Chris Brown. He’s another player who saw action in all 12 games last season, but it feels like he’s ready to announce his presence this year as a starter.

The redshirt sophomore waited his turn behind Toa Lobendahn last season and is now ready to take over as the leader of this offensive line. His snapping has been impressive throughout the spring and fall. Opponents will bring plenty of pressure no matter who winds up starting at quarterback for the Trojans, so Neilon’s ability to set the line and make sure everyone is working together could have the most meaningful impact on what type of season this is for USC.

Richmond came to USC from Tennessee as a grad transfer. There’s an outside shot that he could wind up the starter at right tackle, but at the very least, he’ll be an important addition as depth at either left or right tackle

It’s still very early in his career, but Jackson appears to be on a three-year path to the NFL. He’ll see the field plenty this year, and has the talent and opportunity to potentially make a run at some true freshmen marks for USC defensive linemen.

Tremblay came to USC from junior college last season and it was hoped that he would make an immediate impact. After playing in the first three games, a knee sprain sidelined him for the rest of the season. Now healthy, Tremblay came on strong over the second half of fall camp and gives the Trojans another big body up front when they go to a four-lineman look.

When senior Jordan Iosefa went down with a knee injury, the USC coaches wasted no time elevating Goforth into his spot. In fact, Goforth has taken a number of reps with the first team at middle linebacker this fall. A heady, instinctive player, Goforth is unlikely to jump Houston as a starter, but he is capable of producing as a true freshmen, and could be called upon at points this year.

Echols is another player with 11 games of experience under his belt, but will be asked to take his game to another level this season. The outside linebacker spot needs someone to claim it, and Echols has been the closest to doing so, while competing against Juliano Falaniko and Malik McClain (both of whom could make this list as well). Echols has been very good in spurts this fall, and now we’ll see if it all comes together consistently for him.

Taylor-Stuart (photo above) played in four games last year, but he might be a season-long starter in 2019. He has improved his cornerback play tremendously this offseason and he’ll be called upon to serve as a rock in the defensive backfield as just a redshirt freshman. He has a terrific combination of size and speed, so it will just be about putting his technique together.

Steele was a huge offseason addition as a transfer from Florida. He has been working with the first team defense for large parts of fall camp, and he will absolutely be asked to step on the field as a true freshman. The Trojans have returning cornerbacks in Olaijah Griffin and Greg Johnson, but Steele will be an important part of that rotation. Growing pains are expected, especially early on as he will undoubtedly be a target for opposing quarterbacks, but he has the talent and attitude necessary to hold his own out there.

The former Australian rules football professional has put on a punting clinic through spring ball and fall camp. His ability to flip between booming the ball downfield and gracefully placing punts inside the 10-yard line is beyond impressive. He will absolutely be a weapon for USC’s defense this season, as opponents will likely spend a good deal of time having to go the full length of the field on their possessions.