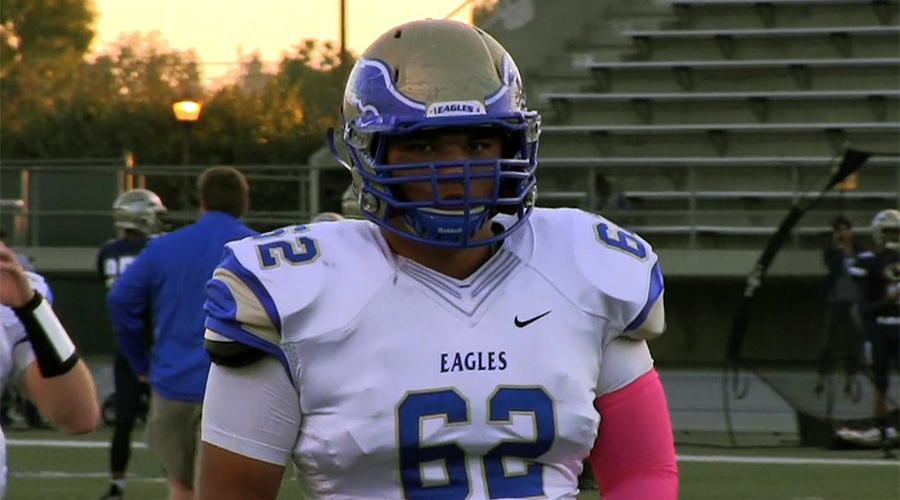 Since the time of his commitment to Clay Helton and staff back in June, Santa Margarita Catholic center Brett Neilon has made a name for himself as one of the Trojans’ strongest pledges, and after taking his official visit to Troy this past weekend, it’s safe to say that nothing has changed.

“I’m definitely more confident in my decision than ever,” said Neilon, who stands 6-foot-2 and 285 pounds.

While the trip was filled with plenty of highlights, what left the most lasting impression on Neilon was the time that he got to spend with some of the younger players at USC, specifically early-entrant freshmen Jack Sears and Andrew Vorhees – the latter of whom served as his host for one night, with Frank Martin II hosting him on the other.

“Honestly, it was just hanging out at Andrew Vorhees’ and Jack Sears’ apartment, and just spending time with the freshmen there,” Neilon said. “Everyone was just hanging out, and it was a lot of fun to see that they definitely take care of each other.”

Both Sears and Vorhees raved about their early time on campus so far, with Vorhees, a fellow offensive lineman who stands 6-6 and 290 pounds, extolling the virtues of the training table.

“Andrew is emphasizing how much food they get up there,” Neilon said with a laugh. “I thought that was pretty funny. They both love it. They have a nice room, and they said that everyone is super nice to them. They definitely see that we’re building something special, just because the whole team is really close. It’s just a good atmosphere to be in.”

Another part of the visit that stood out to Neilon was his trip to the Coliseum on Saturday.

“That was really fun,” Neilon said. “We put on the jerseys, did a little photo shoot, and then we went out to the Coliseum and we watched the Rose Bowl highlights. That was a really cool moment. Coach Helton talked to us and all of the families on the field.”

Neilon also got the chance to spend some extended time with his future position coach at USC, Neil Callaway. The two discussed Neilon’s future role for the Trojans, as well as a change in technique that Callaway would like to see when it comes to his snapping.

“I talked to Coach Callaway a lot on Sunday morning,” Neilon said. “I’ve been dead ball snapping, and he wants me to snap regular, so I’m going to be working on that. He also just told me to get ready to come in and compete. We’ll see what happens, but I think the plan for me is to redshirt, and that’s what I’d like to do – just get bigger and learn the playbook.”

One of ten official visitors to make it on campus this past weekend, Neilon, who has garnered a reputation as a vocal recruiter for the Trojans, also took the opportunity to get in the ear of some of the other top-flight recruits in attendance.

“I tried to recruit Isaiah Pola-Mao, Josh Falo, Aubrey Solomon…I mean, really just everyone there I was hanging out with and getting to know,” Neilon said. “It was cool meeting Jake [Lichtenstein], who’s also committed, and I was recruiting Jalen McKenzie (verballed to USC on Monday night). There were a lot of guys. It was fun. I definitely think everyone had a great time.”

Immediately following his official visit Neilon hopped on a plane to Honolulu, Hawaii to take part in the Polynesian Bowl. With the game to take place on Saturday, Jan. 21, he’s looking forward to spending the next few days hanging out with some of the same USC targets whom he just saw on campus, as well as a fellow commit in Juliano Falaniko.

“I’m actually rooming with Juliano, but he’s not here yet,” said Neilon, who also participated in the recent U.S. Army All-American Bowl. “I’m friends with Isaiah and Josh, so it will be cool. I probably won’t do too much recruiting, just building friendships and whatnot. And then I think Brandon Pili is committing this week, so I’ll try to get in his ear.”

Following the Polynesian Bowl, Neilon will head home with two upcoming in-home visits scheduled with the Trojans coaching staff on the horizon. And on Feb. 1st, it’s Signing Day, which Neilon is confident will provide Trojans fans with plenty of reason to celebrate.

“This class is going to be really special,” Neilon said. “The guys that we’re bringing in are really good kids, and it feels like we’re definitely in for a big finish, so everyone is just really excited.”