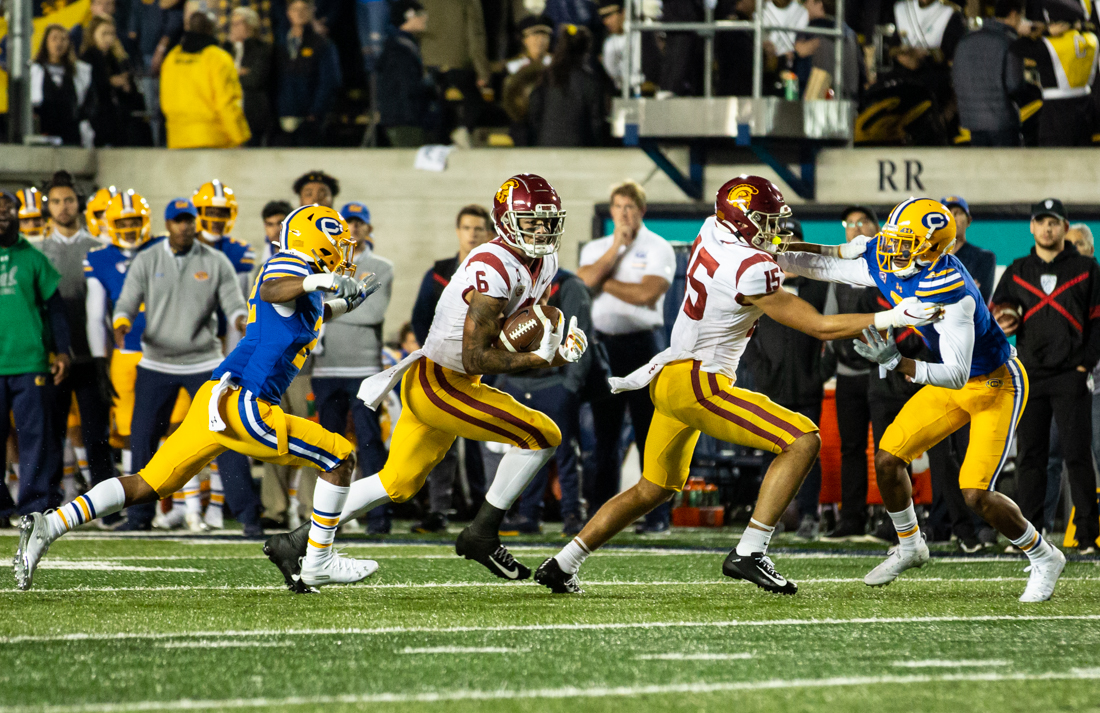 Tough weekend for Berkeley. The workers of the world have not united. Our constitutional republic hasn’t been overthrown. The Trojans, as usual, curb stomped the Bears. And, maybe worst of all, the crowd was so small Saturday that you couldn’t easily blend in with your comrades, which significantly increased the risk of getting caught when throwing batteries at opposing players and fans. Like I said, tough weekend. I can only assume that Cal Bear fans hate USC and America even more today than they did the day before. The feeling, of course, is mutual.

But there’s really not a lot to talk about here. Cal plays pretty good defense. But as Utah discovered, playing good defense in general does not mean you can avoid getting bludgeoned by USC’s 50-50 balls. Defenses guarding Michael Pittman remind me of my junior high basketball team when we played against future Duke center Cherokee Parks (I think he was 6’8” in junior high). All five of us, surrounding him, jumping as high as we could trying to grab rebounds; Parks stomping on us like Godzilla on Tokyoites on his way to a 79-rebound performance. It’s sometimes just a little silly to watch.

And the Cal offense? That Cal offense couldn’t move the ball on a Monte Kiffin USC defense. I don’t know: Kevin Bruce, Darrell Rideaux and I could have played them 11 on 3 and held them to 28. Cal alum William Hung regularly turns in less embarrassing performances than does the Cal offense.

And for all the accolades that Justin Wilcox has received over the last two years, what did you really expect? Clay Helton tolerated Neil Callaway for three years; he continues to employ John Baxter to not practice squib kicks or lane assignments; yet even Clay Helton couldn’t tolerate another minute of Justin Wilcox. He literally chose to do without a defensive coordinator – he chose not even to practice and simply mail it in for the bowl game – rather than employee Wilcox even a second longer. When Clay Helton is that bothered by your incompetence … well, let’s just say that’s an enormous red flag.

As for USC, the things that have been working for USC worked again. Kedon Slovis is a very good freshman QB and should have a brilliant future. He’s now number 13 in the country in passing efficiency. The wide receivers are excellent. There is some talent upfront on defense. That was enough.

The Cal game really just showed us what we already knew: when USC plays bad football teams, the Trojans tend to win. USC has played seven bad football teams: Fresno State (4-6), Stanford (4-6), BYU (6-4), Arizona (4-6), Colorado (4-6), Arizona State (5-5), and Cal (5-5), with one more bad – but dangerous – team on the way. USC under Clay Helton tends to beat bad teams, and with the ugly exception of BYU, it has. USC has played one decent team, 6-4 Washington – yes, they’re decent, or I’m in a generous mood – and three good teams, and as USC tends to do under Clay Helton, the Trojans lost to all but one of the decent squads on the schedule. That’s who USC is these days.

So I don’t think we’ve seen much that’s surprising. Before the season, I predicted a 3-3 start, a 5-1 finish, and an 8-4 final record. I think that’s what we’re going to get. We all know that’s not where USC should be in year four of a coaching tenure, but there’s no point in diving into that mess again right now. I suspect we’re all about seven days from being sunshine pumpers again (or having this board, and USC football in general, turn into a ghost town). In the meantime, USC fans are gobbling up hotel rooms in Vegas or El Paso for bowl season. Or not. The season is almost over. I hate to feel relief, but that’s largely what I feel.

I’m going to miss Michael Pittman. Watching him on Sundays – and I think we’re going to be able to watch him on Sundays for many years – just isn’t as good. Thank you, Michael.

Was that a tango that Olaijah Griffin was dancing? Very impressive. I’m not a big dancer myself, and even if I were, I don’t think I’d choose to dance next to the official while one of my teammates is getting ejected. Still, I don’t want to make a big deal of it; USC football has bigger fish to fry, I suppose. But can we all agree that it was weird and I’ll leave it at that?

Let’s talk about what really matters. No, not Clay Helton’s imminent firing. That matters (a lot) but we’ve covered that. Let’s talk about the Bruins. Saturday determines whether this season is a blah, underachieving season or a disastrous season. Losing two years in a row to crappy UCLA teams with losing records is a disaster. That just can’t happen.

But you know what: it could. I don’t love this matchup. Don’t get me wrong; I think the Trojans probably win. USC’s wide receivers should shred the Bruin defense. And it’s possible – no, likely – that UCLA’s offense will self-destruct. They almost always do. DTR probably turns it over six times in a walk through. But if the Bruins don’t self-destruct? If they actually play their best football of the season, as they often do against USC? There’s the rub. Because that UCLA running game will challenge the Trojans, and DTR is a fantastic athletic who can cause problems with his feet.

Rivalry games against the Bruins are never gimmes, and UCLA’s strength just happens to be a major weakness for the USC defense. Don’t let that Utah score fool you. UCLA was moving the ball on Utah in the first half before the wheels came off. And we’ll see a much better UCLA team on Saturday than we’ve seen for much of the year. You can be sure of that. That huge point spread is nonsense. This is a real game. Slovis needs to protect the football, we need clean special teams play, and the Trojans must tackle Kelley. Wrap. Him. Up.

Can we go slightly off-topic for just a minute? I was watching an NFL game last weekend and there was a question about the proper spot when a runner went out of bounds. I thought the spot was terrible, so I looked up the rules. Have you seen them?

So we’ve all seen players who are going out of bounds but they are able to tip toe along the sidelines for some time before their momentum forces them to take a step out of bounds. Let’s assume that a player is doing one of those high-wire acts, and that the player has the ball in his outside arm so the ball is hanging over the out of bounds line (such that if he dropped the ball and it fell straight down, it would land out of bounds).

With me so far?

Now imagine this scenario number one: the player does this high-wire act for 20 yards and manages to keep his feet in bounds all the way until he crosses into the end zone, at which point he steps out of bounds. Is this a touchdown? If I’m reading the rule right, it is:

A touchdown is scored when:

1. the ball is on, above, or behind the plane of the opponents’ goal     line (extended) and is in possession of a runner who has advanced            from the field of play into the end zone

This is a touchdown because the goal line is extended sideways indefinitely. So if the player’s feet are in bounds until he crosses into the end zone, it doesn’t’ matter where the ball is when he crosses.

But let’s look at a second scenario. This time the runner does his high-wire act for almost the full 20 yards, with the ball hanging in his outside arm out of bounds the whole way, but he steps out at the one-inch line. Does the ball get spotted at the one-inch line? Apparently not.

If I’m reading the rule right, in this scenario, the ball would be taken back 20 yards and spotted where the ball itself first crossed over the invisible out of bounds line that extends to the sky, even though the player kept his entire body in bounds for an additional 19+ yards.

Does that make any sense? It doesn’t to me. Or am I reading those rules wrong? If the plane of the goal line extends out indefinitely so that a touchdown is scored, regardless of whether the ball is being held in bounds or out of bounds, so long as the player keeps his feet in bounds, why doesn’t forward progress also extend out indefinitely such that the ball would be spotted at its furthest point forward whenever any part of the runner’s body touches out? Who cares when it crosses the out of bounds line?

What do you think, Cato? Just one more week? Carthago delenda est.