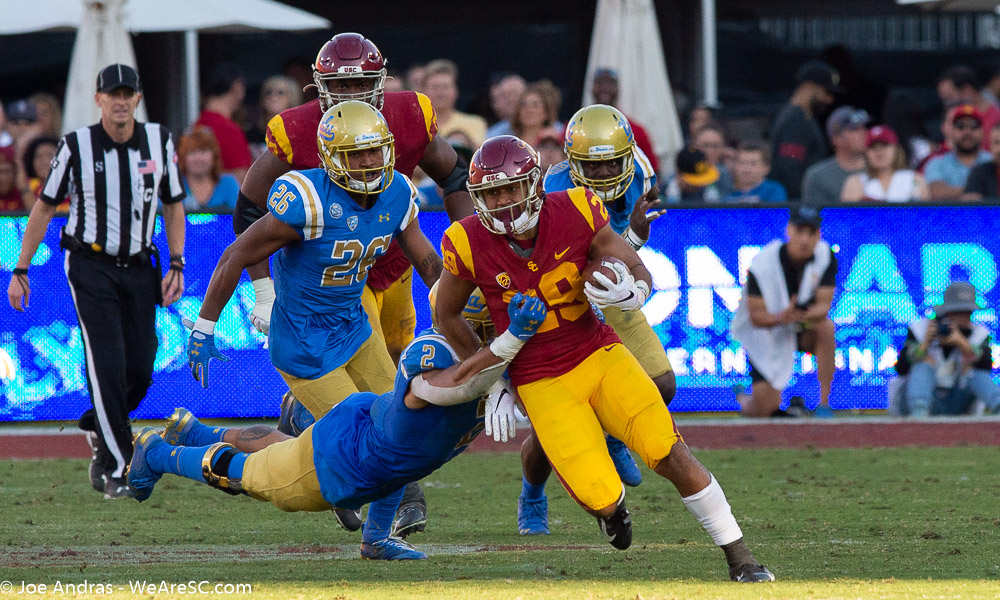 Chip Kelly has been a disaster at UCLA.  For most of the past three years, Chip’s UCLA teams have looked more like his 49ers teams than his Oregon teams.  I’m surprised; I’m not afraid to admit that.

But if you haven’t seen the Bruins this year – and judging by the TV ratings, you haven’t – don’t expect to see more of the same on Saturday.  This year’s UCLA team is much improved.  In fact, with one major exception, the stats show that UCLA is a better football team than USC so far this season.  Let’s start with some stats and end with some analysis.

USC averages 5.7 per play and gives up 5.1 per play for a differential of +0.6.  That’s a slight but statistically meaningful edge to the Bruins.

But where the Bruins have a clear advantage is in the running game, and this advantage is on both sides of the ball.

UCLA averages 4.5 yards per rushing attempt (29th in the country) and gives up 3.7 per attempt (36th in the country), for a differential of +0.8.  That’s not bad, especially considering that UCLA has played the first, third, and fourth-ranked rushing teams in the conference.  (UCLA itself is the second-best rushing team in the Pac 12 in yards per game.)

The Trojans, of course, are a passing team, but not a particularly explosive one at this stage.  USC averages only 7.5 yards per pass attempt, good for 53rd in the nation, whereas UCLA averages 7.2 yards per attempt, which is 65th.  USC has the advantage, but it’s not as big as you’d expect from an Air Raid offense.

What does this likely mean?  Here are the main issues from my perspective.  USC will struggle to run the football; that’s almost a given.  This is a concern because UCLA can rush the passer.  They are 14th in the country in sack percentage this year.  I suspect the Bruins will have to tone down their aggressiveness defensively – playing the Trojans’ receivers man-to-man is usually a foolish strategy, so I’m guessing the Bruins will blitz less than usual – but the Bruins’ down four can apply pressure.  USC can’t afford to get in a position where it’s constantly playing behind the sticks and allowing UCLA’s pass rushers to tee off on Slovis.  2nd and 9 is not a good situation, and the way USC runs the ball and UCLA defends the run, I think a lot of first down runs will mean a lot of 2nd and 9 situations.  So I think USC will abandon the run early and throw on virtually every down.  UCLA will probably be too smart to play man and will, instead, drop 7 and 8 into zone coverage.  So the first key to this game is whether Graham Harrell can finally solve the soft zone.  If he doesn’t, the Trojans are in big, big trouble.

The second major question is whether the Trojans can stop a pretty good UCLA rushing attack.  It’s hard to win a football game when you can’t run and can’t stop the run.  And even Chip Kelly’s bad UCLA teams have had success on the ground against USC.  In 2018, Joshua Kelley had almost 300 yards rushing all by himself.  We don’t need to dwell on that.  In 2019, the Bruins got down big early but still outrushed USC 157-128.  That’s not a huge difference, of course, and the Trojans can handle a differential like that and still win. But they can’t give up 250.

This will be a major test for USC’s run defense.  We’ll see whether Todd Orlando is willing to put his Dime defense on the field against a good UCLA rushing attack and, if he does, whether the quickness of USC’s unit can make up for its lack of size and strength.  I’m skeptical.  I don’t think you can stop a good running attack playing five safeties.  The big guys will have to show up big this week.  This is the part of the game that worries me the most.

The third key to the game is mistakes – penalties and turnovers, especially – which are often a critical factor in any big game.  The Bruins are pretty average on the penalty front, averaging 51.8 penalty yards per game, which is 67th in the country.

USC, as you may know, has a head coach that has publicly declared it his personal responsibility to cut down on penalties.  You’re probably aware of that campaign; it was heavily advertised.  And the Trojans are 110th in the country this year in penalty yardage. Three cheers!  This is a dramatic improvement over USC’s 2019 squad, which was 120th in the country in penalty yards per game, and its 2018 squad, which was 122nd.  At this rate of improvement, if Clay Helton and his Set Jaw will pull USC into the top half of the national rankings in penalty yardage sometime around 2041.

USC cannot afford to kill offensive drives or extend UCLA drives with penalties.  Be careful, Trojans.  This might be the week when re-creating the final dance scene in Thriller draws a costly penalty flag.

Where USC does have a big advantage is in turnovers.  The Trojans offense has been just okay, giving up 1.5 turnovers per game.  But the defense has been stellar with 12 takeaways, good for second in the country in turnover margin.  UCLA, by contrast, is among the worst teams in the country at -0.7 in turnover margin.  And in their two losses, the Bruins were awful, losing the turnover battle 4-0 to Colorado and 4-1 to Oregon.

Turnovers tend to be unpredictable; I hate to have to depend on winning the turnover battle to win a game.  But I think that’s where the Trojans are.  USC must protect the ball and must get multiple turnovers from the Bruins.  If USC’s defense can continue to force turnovers, the Trojans have a very good chance to win this game.  If they don’t, if turnovers are about even or, help us, in UCLA’s favor, this is a difficult game for USC to win.

Why?  Simple: because unless we see significant improvement, USC’s offense won’t be able to run and will struggle against UCLA’s soft zone defense, whereas UCLA’s offense, which is much more balanced, and has a running quarterback, will be a major challenge for USC’s defense. All that being said, this is the USC-UCLA game, which is historically one of the most-unpredictable rivalry games in the country.  You never really know what might happen in this game.  So forget everything you just read.  Throw out all the stats, forget the analysis, and be ready to be surprised.