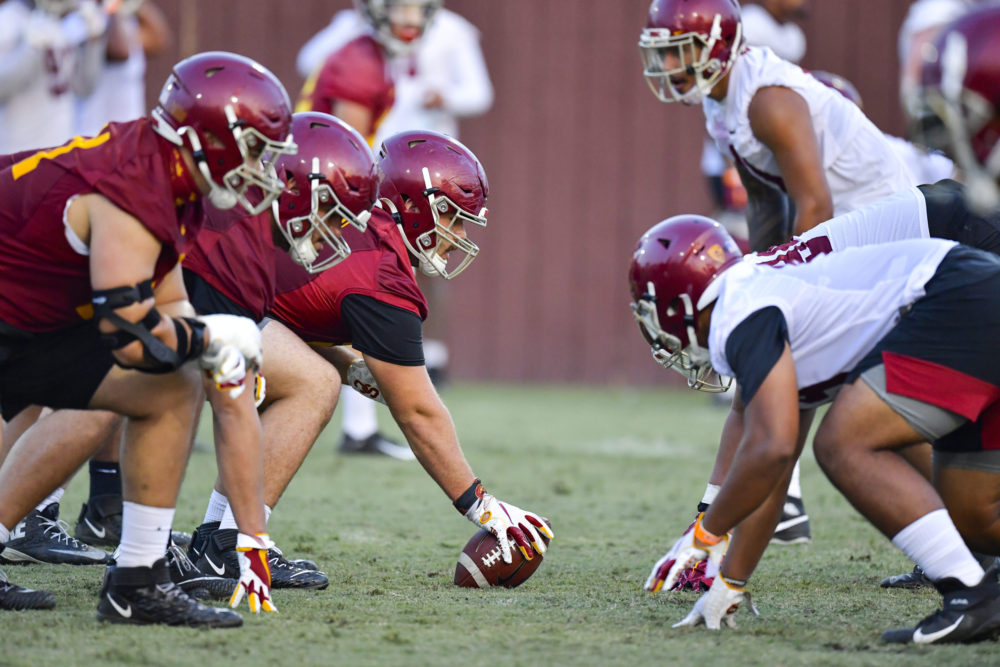 Question Number One: Does USC have an offensive line that can keep its QB from being killed? I feel good about Slovis (better than good if he’s truly healthy), Drake London is a stud, and there is enough talent at receiver that I’m not worried about the pass catchers. The question is what the full-time pass blockers on the team – you know, the O line, the tight ends, and especially the running backs – can do. I’m nervous about that. I think all Trojans are nervous about that. Which brings us to…

Question Number Two: Does USC have anything in the middle of its defense?

USC has some edge rushers with talent. The secondary should be pretty good. But can USC control the A gaps? Does USC have a linebacker that will run downhill and physically punish ball carriers? Can USC, in other words, stuff the inside running game?

I had my doubts before. Now, with the loss of promising freshman DT Jay Toia, I have grave reservations.

Ordinarily, losing one freshman lineman should not induce panic. But USC’s recruiting and development in the trenches has been lousy for some years now, and the Trojans simply cannot afford to lose big, talented bodies.

Trevor Trout – not likely to contribute this year

None (although Tuli Tuipulotu should have been)

That’s not good. I wouldn’t be worried at a program like Utah, where Kyle Whittingham conjures defensive linemen out of thin air like some strange mash up of R. Lee Ermey and David Blaine. But that has not been Clay Helton’s track record.

The Trojans did bring in Ishmael Sopsher, a big guy from a big program who might be an answer to prayer. But Sopsher didn’t cut it at his last program, so it’s hard to know what to expect. And, besides, he’s 335 pounds and coming off an injury. Does that sound like a 60-70 snap guy to you? Me either.

If you combine the lack of quality talent at the interior DL positions, with the big misses in the linebacking ranks – the loss of Levi Jones, Palaie Gaotaote’s failure to develop and imminent transfer, and Solomon Tuliaupupu’s injury problems – and you’re looking what is potentially a fatal problem. Can Todd Orlando figure something out? Maybe. But if I were Utah, Stanford, UCLA, or ND – maybe even BYU and ASU – I would feel pretty good about my chances of running the ball on the Trojans.

It looks like USC is going to test how many games you can win when you can’t run the ball or stop the run. That experiment seldom ends well. And USC is going to do it with a coach whose track record suggests that he can only win with a decided talent advantage.

Does that last sentence seem too harsh? (Probably not to anybody who is still reading these columns.)

Well, CBS recently came out with its coaching rankings for the Power 5 conferences. Clay Helton came in 48th of 65, which puts him in the 27th percentile. That USC has a coach who is considered to be in the bottom tier of all major-college football coaches is weird, but not unprecedented. That he is about to start his seventh full season, has only one single conference title, has a winning percentage below USC’s traditional winning percentage, has master-minded some of USC’s most embarrassing blowout losses, has lost the entire fan base, and USC fans still don’t think he’ll be let go anytime soon! That, my friends, is astounding.

But I’ll give Clay this: he continues to land top quarterback recruits. Jaxson Dart just won the Gatorade National Player of the Year award. That’s a pretty big deal. Strangely, in the last 20 years, 12 QB’s who won that award went on to play football in college. Five of them went to USC. Four of those have played for Clay Helton! (One of them, Matt Barkley, played when Clay Helton was an assistant.) No other coach even comes close to a mark like that. None of the other big coaches have had more than one. Nick Saban hasn’t had any.

And in the ten years Clay Helton has been at USC, coaching these quarterbacks: two top-10 finishes.

Clay Helton is a talent manager who signs the Beatles, the Stones, Led Zeppelin, and the Who and ends his career with a single gold album and three top-20 singles.