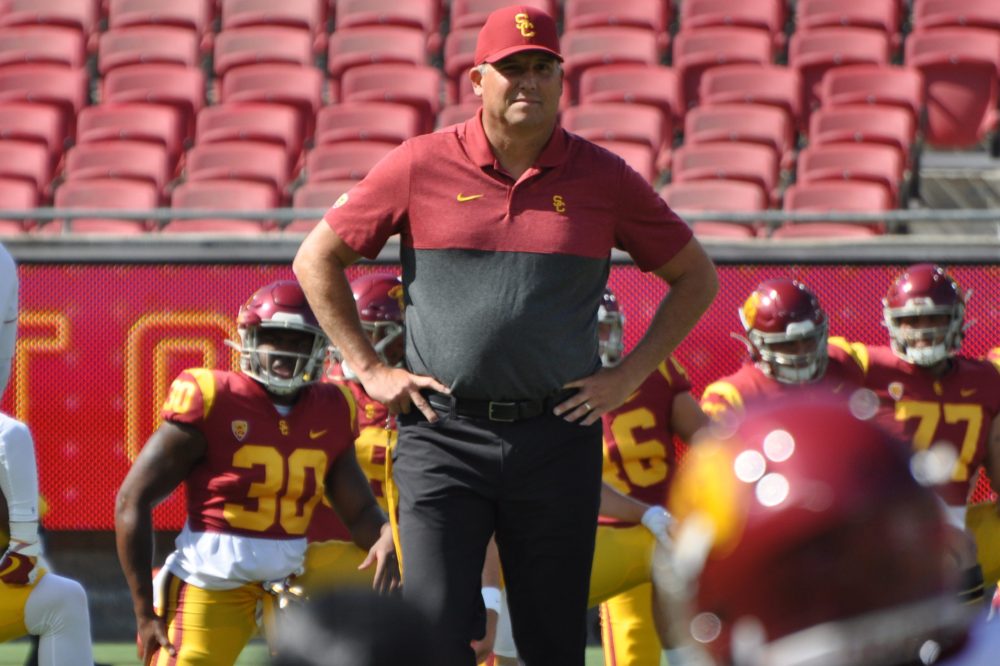 If the doctor botches the surgery, do we cheer him because he tried so hard? If the engineer messes up the calculations on the bridge he’s designing, do we commend him for continuing to try throughout the process? If the general loses battle after battle, do we celebrate his career because he showed so much heart?

As far as losses go, that wasn’t a particularly bad one. It wasn’t UCLA 2018, or ND 2017, or Alabama 2016. But it was still a loss. And the numbers are getting ugly. USC has now won eight of its last 19 games. The Trojans have won two of their last 10 away from the Coliseum. By all objective criteria, USC has been a below-average football team for a year and a half now.

So why do Clay Helton, his assistants, his staff, and his players continue to applaud themselves on not quitting? This week, USC was playing its biggest rival, a top-10 team, in probably the greatest college football venue there is, in front of 80,000 plus, on national television, with a group of players who have NFL aspirations. Under these circumstances, finding eleven guys you can put on the field who will try hard for 60 minutes should not be a major accomplishment.

There is nothing heroic about not quitting. Not quitting is the bare minimum you should expect. Frankly, this kind of talk is more than a little embarrassing at this point. Yes, USC doesn’t quit. And that’s not good enough. It’s not close to good enough. Not for USC football. Not for anybody.

The Irish were just more physical. The Trojans were getting blown off the ball for much of the game. The interior D linemen, who had been playing well, got humiliated by Notre Dame’s offensive line. Christian Rector, who is either hurt or disinterested, has become a major liability at defensive end. The linebackers are lost. And that chronic bad tackling reared its ugly head again. The pattern is well established at this point. When a Clay Helton USC team plays an elite opponent, it does not physically match up. It’s hard to win football games when you give up over 300 yards rushing.

This is not to say that USC doesn’t make some plays or do some good things. The Trojans have some talented football players. The difference, as always, is that good teams make a play when they absolutely must, and had teams don’t. Clay Helton always stresses how it was just a few plays here and there that made the difference. Of course it was, coach. That’s how football works when both teams have enough talent to win the game and both are trying hard. It’s a few critical plays here and there.

But it’s not random chance. It’s not by accident that the New England Patriots always seem to make those few plays that decide football games. Good teams do that. The problem for Clay Helton is that since Sam Darnold’s departure, USC is generally not the team making those plays. When USC’s defense absolutely had to get one stop against Notre Dame, it couldn’t do it. When USC needed a play to extend drives and put points on the board in the first half, it couldn’t get it done. Yet when the Irish offense had to make a big play, they did. That’s what good teams do. And despite Clay Helton’s insistence to the contrary, USC is not a good team.

I was disappointed when Clay Helton essentially admitted his failure to do what he had promised to do and abandoned his stated philosophy of building a power running team to take up the Air Raid. But I understood that in light of his failure to recruit and develop an effective offensive line, this was probably the best option over the short term.

But I at least thought we were going to get the Air Raid. I expected wide open, aggressive offense. I expected an offense that would attack the defense and keep opponents on their heels. Is that what we have? It certainly doesn’t look like it to me.

What I see is an offense that is conservative and tentative. One that isn’t particularly aggressive or innovative. One that throws a lot of short passes to stationary receivers for little or no yards after catch and relies exclusively on the athleticism of its big receivers to make plays on 50/50 balls in order to make something happen downfield. Watch Oklahoma’s offense and watch USC’s, and tell me that USC is running a cutting-edge offense. With the change in scheme, USC managed to get even softer offensively without getting particularly creative or aggressive in the process. I’m ready to send this offense back to North Texas.

By the way, just imagine what could have been if Clay Helton really had been committed to his stated philosophy. What if he had made recruiting and developing offensive linemen his primary goal, rather than using that assistant coaching position to keep employed a no-longer-effective, kindly uncle? And what if Clay Helton really were committed to playing the best guy, such that the most-fearsome runner in the conference were getting 25 carries a game behind that powerful offensive line, instead of sitting at number three on the depth chart and getting nine or 10 carries a game? USC football would be in a very different place right now. Clay Helton’s career would be in a very different place right now.

There is good news. The right leader can right this ship in a hurry. Kedon Slovis is a talented kid. The young secondary has far exceeded expectations. Markese Stepp is a battering ram. There is a ton of talent at WR. No, USC probably doesn’t have the players in the trenches to compete with Alabama next year regardless of who is on the sidelines. But the team could win some road games. And it could roll through a pedestrian Pac 12. And it wouldn’t take long for a competent coach who is committed to strong offensive line play to turn that unit around.

Oregon did it relatively quickly without USC’s recruiting advantages.

Now we just have to wait and see whether USC’s administration believes in Clay Helton’s participation-trophy philosophy or chooses to demand excellence.

Between the Second and Third Punic Wars, Cato the Censor, a famous Roman politician, ended all of his speeches in the Senate, for years, with the same phrase: “Carthago delenda est.”

Carthage must be destroyed.

To Cato, all of the other things the Senate dealt with—important as they might be—paled in comparison to this all-consuming issue. Rome’s very existence, he believed, depended on solving the problem of the growing threat in Carthage.

I feel the same way about USC football. There are plenty of things that need to be fixed, some of them important. But there is one, overarching issue of such significance that it is really the only thing that matters. Unless USC takes action to solve the fundamental problem with USC football, it doesn’t much matter what it tries to do with all of the other, smaller problems.