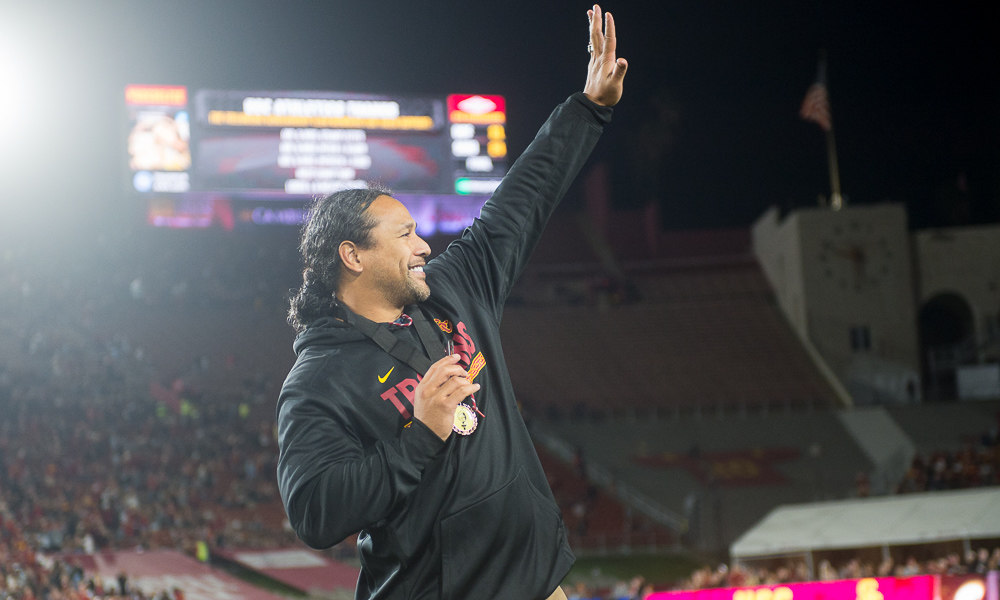 That was depressing. I’m happy for Coach O, but still.

As some of know, I’m a Brazilian Jiu Jitsu practitioner. The thing about BJJ is, no matter how long you’ve been training, no matter how good you might think you are, somebody out there is able and willing to put you in your place. A few years ago, as a brown belt, thinking I was ready finally to get my black belt, I visited a gym run by a friend of mine, an elite practitioner. He treated me like a child, just gave me a thorough, humiliating beating. I could do nothing right.

Seeing somebody who is truly elite brings clarity. This is how BJJ breeds humility and strips away delusions.

Watching that national championship game Monday night should bring clarity to any USC football fan who still thinks the Trojans are on the right path. (Are there any or is it only people who draw paychecks from USC who believe this?) The difference between those two teams and our Trojans was stark, enormous, daunting.

I don’t know how much integrity was on display. It’s hard to track integrity statistically. You can’t see integrity the way you can see tackling, blocking, running, and passing. You know, actual football stuff. You can’t track it. Which makes it a nice, empirical data-free buzz word to justify bad decisions, I suppose. But in those areas that are actually visible during a football game, the gulf between USC and the teams that used to be its peers in the college football world seems almost insurmountable. Dedicated to championships? Good to great? Please.

Occasionally USC fans compare this football program to the Titanic. That’s a little unfair to the Titanic: nobody intentionally sunk the Titanic. They didn’t put a captain in charge with a proven history of running into icebergs and keep him there, iceberg after iceberg.

Still, for those of you who remember the Leonardo DiCaprio film, you probably remember one of the worst villains in film history: no, not the fiancé or his henchman; I’m talking about the girl, Rose. She’s the one who lays on top of that large piece of wooden furniture while her would-be boyfriend stays immersed in freezing water until death. There was clearly room for both of them; it might even have been beneficial to have him next to her where they could both benefit from the other’s body heat. But no; she sprawls out in comfort above the icy ocean; Jack dies.

Years later, possessing a diamond of such value that it could change the lives of her friends and family for generations, or rebuild her community, or feed thousands of starving children, Rose decides simply to chuck the diamond into the ocean.

In the movie we see only the young Rose and very old Rose, never the Rose in the middle. But USC fans see her. She’s running the university. Our Rose says she wants a football program that doesn’t embarrass the university, one where the players are treated well, one that develops character. But there’s room on the makeshift raft for that and good football, Rose. You really can have both if you want it.

Is there any reason to believe that Ed Orgeron isn’t treated his kids well, isn’t acting ethically, isn’t helping to develop character? It appears he can do those things and also do football stuff, like practicing hard and teaching players to block and tackle. Like getting results rather than specializing in delusional happy talk and excuses. Like actually earning the millions he gets paid.

Did anybody see Nick Saban in the ESPN pregame show? How uncomfortable did that guy look when Lee Corso put on that LSU Tiger head? Saban had that weird, awkward grin on his face; wasn’t sure whether to look at the absurd Corso, look at the camera, or look down. You could tell he just wanted that bit to end and end quickly.

That bit about wanting it to end and end quickly … I suspect that’s how we’re going to feel the next time we see Nick Saban.

But, hey, Clay Helton, you want people to stop snickering and rolling their eyes when you talk about winning championships? You want the doubters to quiet down and for your seat to cool a little? It’s easy. Beat Alabama. Beat an elite opponent on a big stage. Do that, and things will look very different for you and your program.

Do I think you can do that? No, of course not. I’m not convinced you could beat Nick Saban and Alabama with the 49ers roster. There’s a chance Nick would beat you at tic-tac-toe even if you got the first two moves. But what do I know? This is a great opportunity to shut up critics like me. Make it happen.

Troy Polamalu is about to be elected to the Pro Football Hall of Fame. This is a well-deserved honor, of course. They don’t make them like Troy these days. I’m not sure they ever did. Such a humble, soft-spoken, decent man.

And on the field, such a terror. He played with such reckless abandon, leaping over linemen, blowing up plays in the backfield, delivering bone-rattling hits, popping up in places offensive coordinators never expected him to be. He may not be the greatest defensive back ever to play at USC.

Ronnie Lott probably earns that title. But along with Junior Seau, he may have been the USC defensive player who was most fun to watch.

Any word yet on those “strategic enhancements” Mike Bohn promised? The suspense is almost overwhelming at this point. I hope they have an unveiling ceremony with music and dignitaries.

I’ll beg Erik to let me go as the representative for WeAreSC.com. I’m sure Bohn is a huge fan of Musings.

Do you think Gameday will be at the home opener for New Mexico? I tell you, I get butterflies just thinking about that one.

I know they can’t schedule monsters every week, especially considering the current state of the program. Half the team will probably still be in a Dallas-area hospital from the week before, so I understand the logic of penciling in an easy win for that home opener. Still, could they have found a less sexy non-conference opponent? That game is Baywatch starring Roseanne Barr.

New Mexico does have a good Mexican restaurant right across the street from its campus, however. Great tortillas. So if we’re ever scheduling home-and-home series with New Mexico—and I have a suspicion we soon will be—keep that in mind.

I have one request for the new defensive coordinator, whoever that may be. Contain. Please—please—let’s contain somebody at some point next season. No, not in the opener. I don’t expect miracles. But against New Mexico? At some point in that game can we force an outside running play to cut inside and have a linebacker fill the hole? If so, I think Traveler should run a lap right then and there.

Let’s end my latest ray-of-sunshine article on a positive note. Clay Helton’s USC will likely be the Pac 12 South favorite next season … and 18-point underdogs in their opening game.

Welcome to Larry Scott’s Pac-12. The conference of champions.