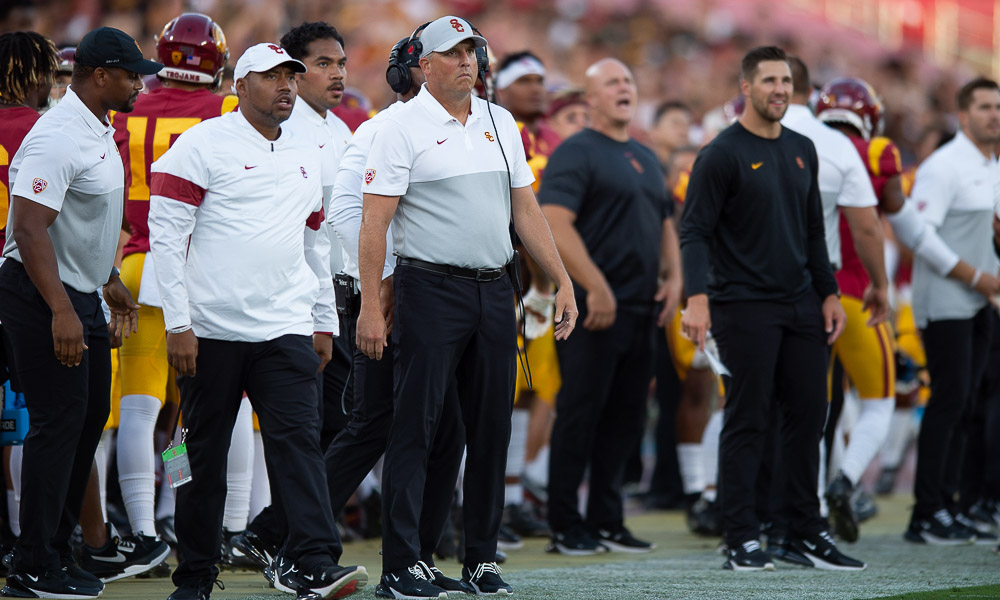 It’s time for a verdict.

Clay Helton’s makeover of the USC football program is now complete. No, it’s not a return to John McKay’s days or even Pete Caroll’s. USC is, instead, BYU under Lavell Edwards. They throw the ball all over the field, score points, don’t run the ball consistently or seem all that committed to it, and the defense is spotty at best. Matched up against an elite team, they have a puncher’s chance if the quarterback gets hot. But they won’t be mistaken for an elite team, and they’re probably not going to win many games against top competition.

BYU played that way because it had to – what’s a Mormon school in a state without many D-1 recruits to do? USC plays that way because … well, because Clay Helton’s stated Plan A failed and this was his best shot at saving his career. And probably because he’s not really capable of producing a better product anyway.

USC held serve this weekend. It once again put up a ton of yards and points as it beat up on another lousy football team. And that UCLA team is lousy, despite the 520 yards it put up on USC’s defense. That secondary is about as bad a secondary as you’ll see in major college football, and you can’t put up a bad secondary against Kedon Slovis, a really good quarterback despite his youth, and the quartet of Pittman, Vaughns, St. Brown, and London. You just can’t. So the Trojans finish the year with only one win against a team with a pulse but also by winning five of their last six. How you see that depends on what you want and expect from USC football.

What does USC have in Clay Helton? Legend has it that Winston Churchill once heard his successor, Clement Attlee, praised as a modest man. Churchill allegedly responded, “He has much to be modest about.”

He could have been talking about Clay Helton. Helton is a nice man, and I think probably a good one. He is also a man of modest abilities and modest accomplishment. I suspect he’s a man of modest ambitions as well, which is why he never seems particularly despondent over being out of the national title race in September, or when he loses games that USC teams aren’t supposed to lose, such as a loss to a 2-9 UCLA team. Or when he loses the way USC teams are not supposed to lose. Clay Helton’s teams lost by 46, 17, 35, and 17 points over a 25 game-span. Those were all in Clay’s “good” seasons. He’s added five more decisive losses in the last two seasons. By contrast, in his first eight season, Pete Carroll lost one game by double digits – by 11 in South Bend.

What’s missing? There are three things that all of the great coaches have in common. The first is an uncompromising drive to win. This is true of dour introverts like Bill Belichick and Nick Saban. It’s true of charismatic and fun extroverts like Pete Carroll. The great coaches win because they are driven to win more than their competitors. Carroll was famous for building his entire program around competition. Practices were legendary.

With the great ones, they always are. Let Urban Meyer tell you: “In our world, at the end of the day it is pretty simple: either you worked harder than your opponents or you got outworked. The challenge is to build a culture—a competitive environment—where everyone gives relentless effort every day. A culture everyone wants but few get.” Is that what you’ve seen from USC football? The program of no-pads November. The program where a senior running backs asks the head coach if they can practice harder. Do you think Nick Saban or Urban Meyer’s players ask if they can practice a little harder?

Second, elite coaches set high expectations. It’s becoming a running joke with those who follow USC football closely that Clay Helton will find the silver lining after any game. No matter the outcome, Clay Helton is encouraged. His players are warriors. They never stop fighting. We did X, Y, and Z really well today. We just came up X plays short.

You want to hear how an elite coach talks? In 2010, Alabama had just defeated Texas for the national title, Alabama’s first in almost two decades. The team is in the locker room celebrating. Saban walks in and says the following: “To you seniors, I just want to thank you for everything you did. Absolutely amazing, everything you put into this program. You didn’t choose us as a coaching staff, but you bought in when we got here, and you’ve been rewarded. We’re grateful to you for that contribution. For those of you coming back, that’s not the way we play in the second half, and you know that. I’m proud of you too, but we’re going to get that stuff figured out when we get back together in a couple of weeks.”

Third, elite coaches don’t ignore the little things. Clay Helton’s teams apparently don’t practice squib kicks, or they apparently didn’t before this year’s Oregon game. After giving up a game-sealing kickoff return with virtually no time on the clock in the first half, Baxter justified the decision to kick deep by saying that USC doesn’t squib the ball well and that is actually a difficult kick if you don’t do it a lot.

One of Nick Saban’s former players calls him “the most detail-oriented human on the planet.” Another says that he found notebooks in Saban’s office setting practice plans for five years into the future. Do you think Nick Saban overlooks having his kickers practice squib kicks?

Listen, I can hear some of you grumbling at me right now. And I get it, I really do. Pessimists suck. We have to overcome our tendency to bring everybody down. If they’re not careful, a pessimist in charge will instill a culture of hopelessness. By contrast, there is something endearing about a born optimist. They’re fun to hang out with. They always have something uplifting to say.

And if they’re not careful, they’ll screw up any major responsibility they ever touch, because “I think everything will turn out okay” is not a plan. Optimists have to avoid complacency and the tendency to allow happy thoughts to replace true nose-to-the-grindstone preparation.

Clay Helton is an optimist who has not overcome the worst tendencies of an optimist. He probably never will. If you can escape an enormous and embarrassing setback in your career by the skin of your teeth and still don’t fundamentally change how you prepare, you’re probably too far gone.

Clay Helton sees an underperforming team that is out of the national title race in the first month of the season and he says, “Just wait until you see how good we are in November.” He sees a kickoff team that struggles every week, or a punt returner who doesn’t know when to catch a punt, or a team that can’t tackle, or, or, or, and he thinks everything will probably turn out okay. Nick Saban looks at an undefeated, dominant football team and says, “People seem to look at our team like a convertible, aight, like a really nice convertible going down the road. Nice shiny, shiny wheels, really nice looking girl driving it, aight. Everybody sees that. They don’t see the oil leaking, and they don’t see the bald tires.” Clay Helton never sees the oil leaking and therefore never does anything about it. Nick Saban always worries about leaking oil, and therefore his car leaks a whole lot less.

It’s up to USC’s administration to decide whether they care about being nice or being great. If USC decides it wants to be great, it has to move on from Clay Helton. There is no argument at this point that Clay Helton is or is likely to be a championship coach. Move on and the fan base will be energized, recruits will again be excited, and there is no limit to what this program can do under the right leadership.

If USC doesn’t care to be great, they can keep Clay. He won’t show up to work drunk. He won’t deflate footballs. He won’t embarrass the school (unless you find blowout losses on national television embarrassing). And if that’s the way the school decides to go, then all of us will just have to adjust.

About 15 years ago there was a mediocre romantic comedy with Jimmy Fallon and Drew Barrymore. Fallon is a Red Sox fanatic in the film and is depressed when the Red Sox fall behind 3-0 to the Yankees in the World Series. Fallon and his buddies are commiserating at the bar, too depressed to eat, when they see three Red Sox stars eating dinner and seemingly having a good time. This changes Fallon’s perspective and convinces him to put other things in life ahead of the Boston Red Sox. Why should he be overly depressed over a Red Sox loss when the Red Sox themselves seem to be handling the disappointment just fine?

So if Helton stays, so be it. We will all have to adjust. We’ll have to think about whether it makes sense to donate to the football program, buy season tickets, travel to away games, spend hours every week on online articles, or otherwise spend time, money, and effort and stay emotionally engaged. Some will stick it out. Not many. I remember sitting with 40,000 of my closest friends in Hackett’s last year. Many will fade away. To each his own; I’m not going to be critical of either group. People will do what they wish with their own time and money.

That’s all I have to say. I’ve said most of it before. And if Clay Helton comes back, I probably won’t have anything new to say all next season. I’ll have to think about what that means. Nobody needs to listen to a broken record. Okay, Mike Bohn, Carol Folt, Rick Caruso, it’s time for your verdict. Everybody says that USC is committed to winning championships. Now we see if that’s true. Does USC care about playing great football or is that just a stuffy, old tradition that needs to be finally cast aside?