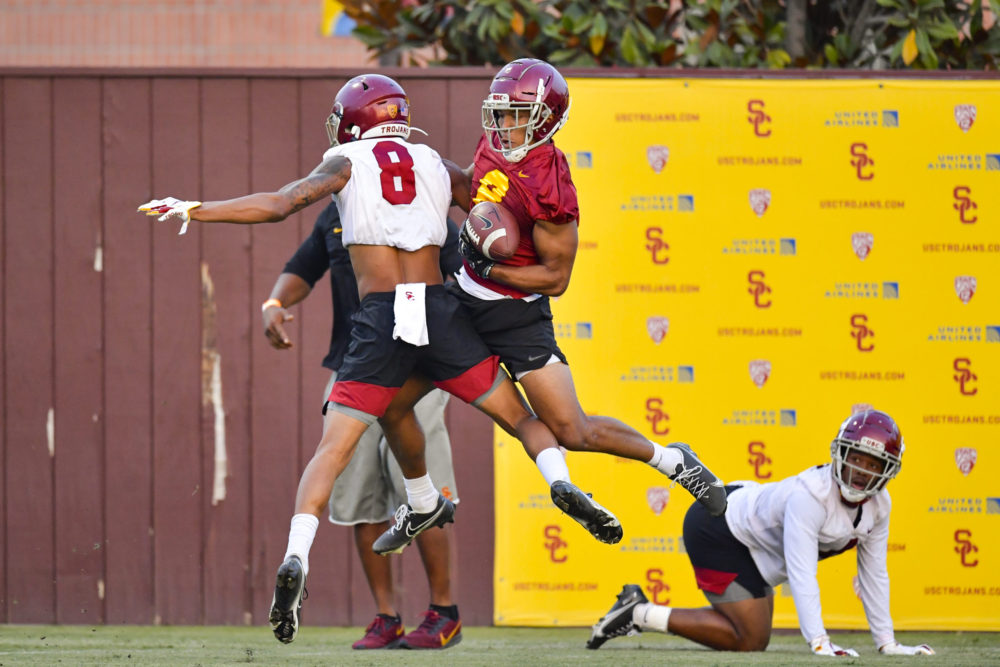 USC football is back, almost. And in what will likely be the oddest season in college football history, this will also be the season with the easiest schedule in USC history. No Notre Dame. No road games against hostile crowds. No challenging non-conference foes. No top-25 teams on the regular-season schedule.

The schedule is just plain weak. Four of the six regular-season opponents have been designed national disaster areas. Wazzu no longer has the Pirate and is always at a massive talent disadvantage anyway. Arizona is a sunk ship (it isn’t sinking any longer; it has officially landed on the ocean floor) captained by the worst coach in the conference. Colorado is in total rebuild mode with the mediocre Karl Dorrell at the helm. And UCLA is embarrassingly bad. That’s four train wrecks. A loss to any of those teams would be inexcusable.

Utah isn’t a disaster, of course. They’re tough and well-coached. But they lost their best offensive players, and without that homefield advantage, Utah’s overall lack of talent will likely make its presence known, as it usually does when they come to the Coliseum.

That leaves ASU, an improving team with a dangerous QB in the opener. But USC is better than ASU. If the team can wake up on time for a kickoff that is, thanks to Larry Scott’s brilliance, scheduled for first light, the Trojans could overcome their biggest hurdle in week one.

Even the conference title game looks manageable. The heavy favorite in the north is an Oregon team that has lost its QB, offensive line, most of its defensive backfield, and won’t have the Autzen homefield advantage. USC has the best quarterback in the conference, a deep group of backs and receivers, and more talent than their opponents every week.

So there you have it: win in week one, and you’re on your way. There’s only one potential problem: Clay Helton has never had a team ready to play its opener. I don’t need to talk about the crimes against humanity that Nick Saban perpetrated on Clay’s team in 2016. You can read the Amnesty International report for yourself. But even if we look at the following three openers, I think we can see that USC has played like garbage every opening game in Helton’s tenure.

In 2017, USC played a Western Michigan team that had lost its coach and its star receiver from the year before. It was playing a young QB who was making his first start. It was a mediocre (at best) team that finished 6-6 in a second-tier conference. And USC gave up 263 rushing yards and was tied halfway through the fourth quarter.

In 2018, USC gave up over 300 yards rushing to a lousy UNLV team that finished 4-8 that year. Last year, USC had a pedestrian win over a terrible Fresno State team that finished 4-8 on the season. And that game was close to a nightmare. The Bulldogs had 1st-and-10 from USC’s 15-yard line in the final minutes down only one score. That’s not good.

Second games have been a mixed bag for the Trojans over the years. Clay’s guys had a couple of good second games during Clay’s tenure, both against Stanford (2017 and 2019), and a couple of disasters. We never know what to expect in game two. But the opener has been bad every single year.

The Trojans need to fix that this year. This is a short season with a weak schedule, and USC starts with what will likely to be its biggest threat in the south. USC cannot afford to come out unprepared this year. Win the opener, and you have a chance at a very good season, maybe even a playoff berth.

Yes, I said it, a playoff berth? Is that even possible?

Yes, although it’s still unlikely. When the Pac 12 announced that it would not start until November, I was convinced that a playoff berth was impossible. And it’s still unlikely. But the Big 12 is doing its part to help the Pac-12 by melting down every week. Oklahoma is awful. Texas is awful. Nobody else in that conference looks like they’re worth anything. The SEC has apparently forgotten to play defense, which helps. So we’ll see.

I still don’t think seven games will be enough, especially without the challenging out-of-conference tests that the Pac 12 had scheduled. But there is a small window of opportunity now.

Okay, I know, Clay Helton isn’t going anywhere. But if Clay unsets his jaw, or if anybody here roots for a program that is interested in replacing its underachieving football coach, you might want to look Campbell’s direction.

Iowa State is a horrible program. It has no history. No recruiting base. It has nothing going for it (except possibly a nice color scheme). In the modern era, only one Iowa State coach has finished with a winning record at that school; that was Earl Bruce more than four decades ago, and he was barely over .500. Johnny Majors, a legend at Tennessee, had a losing record at Iowa State. Gene Chizik, who won a national title with Auburn, had a disastrous two years at Iowa State.

Yet Matt Campbell has had three straight winning seasons and three straight bowl games, and he is on pace to make it four straight in both categories. He has a string of major upsets over highly ranked teams. He has been conference coach of the year twice in three years. And he’s not doing it with smoke and mirrors. His teams are tough and physical. They can run the ball, and they play good defense.

Matt Campbell is a first-rate football coach. Yes, I’m still on the Urban Meyer bandwagon, pipe dream though that may be. But if you can’t hit a home run with Urban, Matt Campbell would be a very good hire.

Saturday, I watched almost all of the OU-Texas game. It was fun, not only because it was exciting, but because it was one of those win-win games for me. If OU loses, they fall to 1-3 and life effectively ends in the Sooner State. Because I don’t like OU, that kind of despair would have raised my spirits. Or, if OU wins, then both teams have two losses in the first month, and that smug look that usually resides on Tom Herman’s mug becomes much more tolerable.

After watching, I concluded that both coaches deserved to lose, because both coached as if they were afraid. In that fourth quarter, Texas destroyed OU. The Sooners’ defense was gassed, on its heels, and hadn’t made a play in a very long time. But Texas, after pulling within one at the end of regulation, chose to kick the extra point instead of going for two. And after scoring in overtime, Herman again decided to kick.

Now I know that the NCAA conversion percentage for two-point conversions is just over 40%, and kicking the PAT is successful 95-97% of the time. So, generally speaking, kicking is usually the right choice.

But those are averages. Elite offenses are far more likely to convert. Twenty-seven college football teams were above 50% on two-point conversions between 2007 and 2017.

In this case, Texas’s offense could do no wrong. They were dominating OU’s defense, and they had a very confident, very experienced QB running their offense. What was the likelihood that Texas would have converted a two-point conversion at the end of regulation? It was far more than 50% under those circumstances–more like 75%, I’d guess.

By playing it safe, Tom Herman put his team in a position where (1) OU’s defense might get a lengthy rest and become much more effective, particularly in the pass rush, and (2) where a single disastrous play could cost you the game. Herman wimped out, and he ultimately paid the price.

But we also can’t give any awards to Lincoln Riley. In the third overtime period, Texas missed its field goal attempt and OU needed only three points for the win. OU got a first down to the 14-yard line. And Riley decided to … immediately set up for a field goal. On first down he had his QB run the ball to the middle of the field and fall down. On second down he kicked. And missed.

Why? Because he’s afraid of a turnover? A turnover is a possibility, of course, but it’s not likely if he plays it safe. Play conservatively, of course, but try to make a play. (Like he did to get a first down already in that series.) Run the ball. Roll out your mobile QB and tell him to run it unless somebody is absolutely wide open. There are options.

If you run some more offensive plays, you might score a TD. And even if you don’t, you are likely to get closer for that final field goal. And this matters. When the NFL moved from the two to the fifteen for extra points, the success percentage dropped from 98% to a little over 93%. OU has a good kicker. But he’s not (yet) an NFL kicker. He’s a college sophomore, kicking against the team’s biggest rival, bearing a tremendous amount of pressure. Those extra yards might really matter. By kicking immediately, you put all your chips on one play, and a play that isn’t automatic. Riley won, but I think Riley also coached scared.