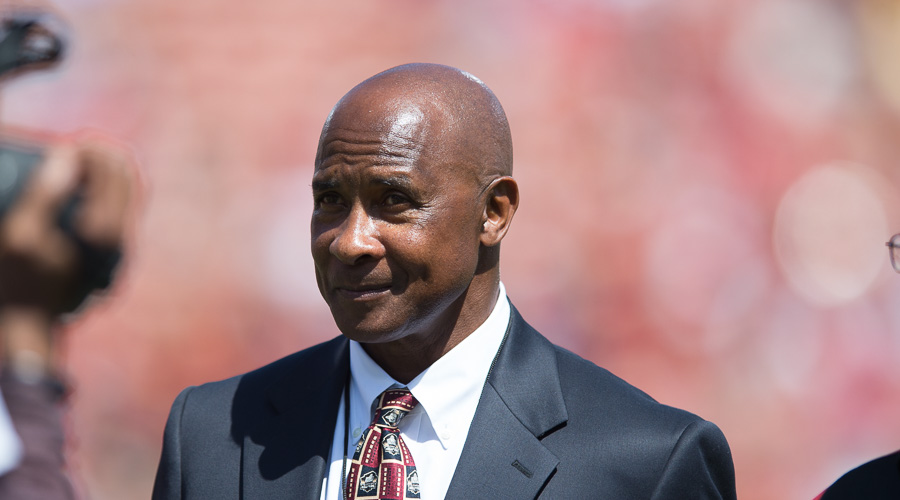 Just before his resignation, Nixon’s approval rating was 24%.  Jimmy Carter ended his tenure at 32%.  Congress is just under 20% right now.  Lynn Swann is insanely jealous.  The hits just keep on coming.

USC has a new lawsuit to deal with (somebody I’ve never heard of complaining about retaliation against an alleged whistleblower in the athletic department), and nobody paid much attention to that.  Ho hum, what’s one more lawsuit?

No, the worst public-relations news last week for the USC athletic department was USC answering this question – Is there any reason to have a Goodwill Ambassador when all of the goodwill has run out? – with this answer: No, and promptly dismissing legendary coach John Robinson.  USC’s athletic department budget is around $120 million.  They couldn’t find money to pay a Hall of Fame coach to shake hands with boosters and talk about the old days.  Too bad – those are the only days worth talking about recently.

Worse yet, Robinson lost his season tickets.  USC apparently can’t afford to give free tickets to a coach that won four Rose Bowls for the program.  (“Sorry John; maybe we could work something out if you had won five….”)  I can only assume that with demand for USC football tickets at an all-time high, there was little that Swann and the USC decision-makers could do to squeeze Robinson in.  I get it.  Looking at the UCLA (attendance 57,116) and Notre Dame (attendance 59,821) games last year, it’s hard to imagine USC being able to squeeze even one more person into the stands.  The fire marshal would be irate.  As Bob Uecker might have said, “Listen to the roar of the crowd as the [Trojans] take the field.”

So, like USC’s former players who also have to pay after their lifetime tickets were revoked, John Robinson can only attend USC games if he pays his way in.  He likely won’t.  He’ll be in Baton Rouge with Coach O, further guaranteeing that the LSU athletic department roster stays substantially more popular with USC fans than USC’s own department roster.

Since USC is in full Rachel Phelps cost-cutting mode, I have some ideas of my own.  And, no, nothing obvious like saving money with shorter Title IX hearings by denying the accused the right to counsel and cross-examination.  I’m sure somebody at USC has already thought of that.  I’m talking good, original ideas.

For example, USC could charge fans a cup holder license fee this coming season.  Those cup holders don’t pay for themselves, and being that this is the most prominent upgrade that most of the fan base will get, a small fee wouldn’t be outrageous.

USC could return to an old tradition and travel to Notre Dame by train this year.  It appears that Amtrak can make that trip in just under two days.  You leave at 7:16 pm, arrive in Denver the following evening at 6:20 and arrive in South Bend the evening after that at 8:14.

(But, Chris, you said just under two days.  That looks like it’s two days and one hour.  Don’t question me.  Without the time change, it would be 1 day and 23 hours.)

And, if we’re shedding salaries, I hear Lynn Swann takes home a good check.  I propose replacing Swann with a Magic 8 Ball.  When a decision needs to be made, an athletic department representative walks into the AD’s office, gives the ball a shake, and gets the answer they need.

“Magic 8 Ball, should the Song Girls be allowed to attend basketball games this year?”

“Outlook not so good.”

“Magic 8 Ball, should we retain our head football coach despite a 5-7 season?”

Or maybe USC could sign these guys to a multiyear deal, since this is now the bulk of the university budget.

For all those asking whether Urban Meyer would take the USC coaching job, you might be looking at the wrong legendary coach.  Bob Stoops apparently still wants to coach, since he took a job with the (failed) XFL, he’s still in his 50’s, and he was an early adopter of the style of the new-style USC offense.  Is he Urban Meyer?  No, but he’s the next level down and still has a great resume.  The guy had a winning percentage at Oklahoma of .798, and in his 18 season at OU, he finished in the top 8 eleven times.  And he doesn’t bring the same baggage as Meyer.

This is probably also a pipe dream, of course, but if we’re going to engage in fruitless and (likely) ridiculous speculation – and that is precisely what Musings is about – then you might as well throw Stoops into the mix too.

On the Rick Courtright lawsuit mentioned above, an allegation is just an allegation.  This could be nonsense.  But I’d be lying if I said I wasn’t troubled to see allegations of NCAA violations being made by a former insider.  He may be wrong.  He may be lying.  But if somebody wants to continue to have a career in coaching, suing USC in a highly publicized dispute is not the safest resume builder.  That doesn’t mean what he’s alleging is true, but it does mean he has some good reasons to not just make stuff up.  Second, while I don’t know his lawyer, she has a legitimate resume.

Again, I don’t know what to make of Courtright’s claims.  I have no reason to believe or disbelieve them.  But it’s hard to dismiss just about any allegations against USC as inherently ridiculous these days, isn’t it?  We’ve seen a lot of things happen at USC over the last few years that caught me by surprise.  So while I’m sure that Lynn Swann was blindsided by these latest allegations, I’m no longer capable of surprise when it comes to USC and allegations of illegal or unethical conduct.  Let’s just hope there’s no merit to this newest story.

Now that John Robinson is headed to Louisiana, can I ask the rest of you a question?  How did Robinson’s 1978 team lose to Arizona State?  That USC team may have had the most stacked roster I’ve ever seen.  I was only five years old, so I have no personal knowledge of the game.  I looked it up and saw that Mark Malone, the former Pittsburgh Steelers QB, rushed for 139 yards in that game, so I guess he was a lot more mobile than I remember.  Still, a faster-then-expected Mark Malone versus Ronnie Lott, Charles White, Marcus Allen, Anthony Munoz, Keith Van Horne, Brad Budde, Dennis Smith, Chip Banks, Riki Gray, etc.?  Seriously, can anybody explain this to me?

Last week I blasted Nike for caving to pressure from the Chinese dictatorship.  I had no idea that Nike would so quickly outdo themselves.  This week Nike would pull a shoe because Colin Kaepernick thinks the Betsy Ross flag is racist.  That should be an Onion headline, not a real news story.  I don’t have anything else to say about Nike.  Strange world we live in….