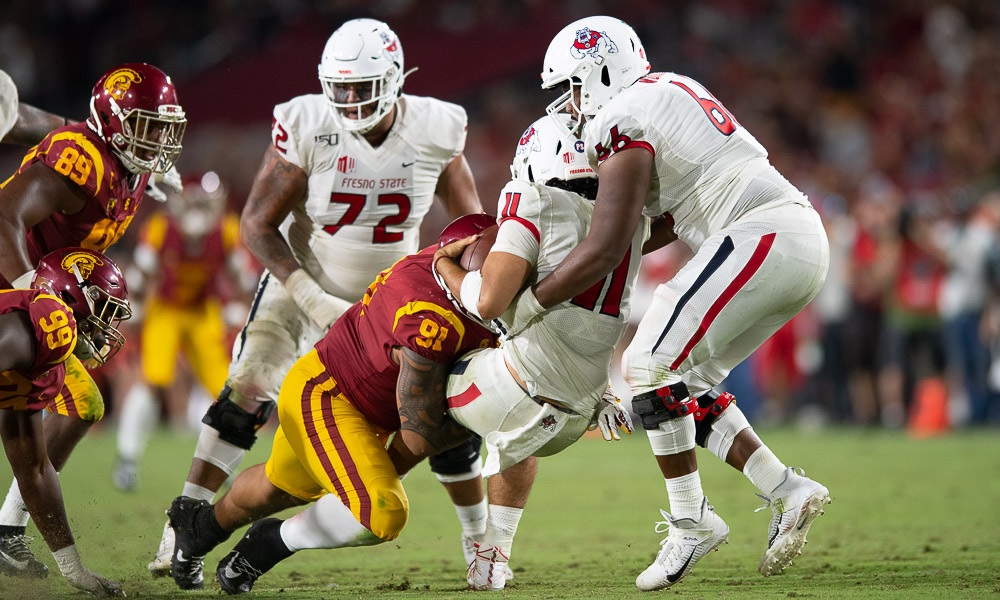 In It’s the Great Pumpkin, Charlie Brown, Linus spends Halloween night in the pumpkin patch awaiting the arrival of the Great Pumpkin, which he believes will fly through the air and deliver gifts to children.  Every year Linus misses trick-or-treating to wait for the Great Pumpkin’s arrival, and every year he is disappointed.  The other kids tell Linus he’s crazy, but Linus persists and remains a believer to the end, despite the absence of any evidence for his position.  He simply wills himself to believe.

USC fans now get to choose whether to be Linus.

I wrote last week that beating Fresno State would prove relatively little.  This was a pedestrian Fresno State team that would probably win a game or two in the Pac 12.  It’s arguably the worst team on USC’s schedule (though UCLA and Arizona are trying to push their way to the front of that line).  So while we have some bouts of pessimism here in Musings, but I never really believed this Fresno State with a journeyman quarterback would actually win in the Coliseum.  I’m not that pessimistic.

No, the issue wasn’t the win.  The important question was whether we would see evidence that USC had dramatically changed course from last season’s debacle, whether we’d see that the alleged makeover to the program was successful.  Would this be a new team?  Last night was the unveiling.

Yes, there were some positives last night.  I discuss some below.  And USC will obviously win some games, maybe even next week.  But make no mistake: there is no Great Pumpkin, people.  We have a pretty good body of evidence at this point, and that body of evidence is only going to get stronger over the coming month.  We can sit around waiting.  We can believe with all our hearts.  We can tell ourselves that loyal fans rally behind the coach and wish for the best.  We can complain about the chicken littles.  We can say that the people telling the truth about the Great Pumpkin are fake fans who like to root against the Great Pumpkin.  We can do all of those things and more.  But it won’t change the end of this story.  The Great Pumpkin isn’t coming, and we should all know that by now.

And if you insist on believing that somehow the program will right itself – Maybe next week!  Maybe in South Bend! – maybe you’re just in the same position Linus was in.  As he put it in his letter to the Great Pumpkin:

“Everyone tells me you are a fake, but I believe in you.

Let’s talk about some positives:

Velus Jones had himself a night.  If not for the embarrassing coaching error on the opening kickoff – more on that below – he would have had an even bigger night.  Congrats to Velus.

The USC running backs are good.  Vavae has a nice combination of speed and power, and Carr, when healthy – and he looks like he finally is – is so elusive.  Both guys are excellent pass catchers, too.  I suspect we’d like what Stepp has to offer, but I understand why the two older guys are getting the reps when they’re that good.

The offensive line played well.  Fresno State isn’t the biggest test – we’ll know a lot more Saturday – but we saw nothing but clean snaps, the QB’s were largely kept upright, and the backs had room to run.  The line is obviously still a question mark, but that first week’s performance was something to build on.

Four penalties for 35 yards is good, really good, especially for an opening game.

USC is still not a physical football team.  They didn’t tackle particularly well, and they didn’t appear to be any stronger or tougher than the less-talented squad opposite them.  This is not a huge surprise.  Other than blind faith, there was no real reason to expect this aspect of the program to change.  But I was surprised that the defensive line wasn’t more dominant.

If anybody saw that sloppy debacle between Miami and Florida last week you saw some bad football … and you saw what a tough, athletic defensive front can do to an offensive line.  There is nothing special about Fresno State’s offensive line, but those guys held their own with USC’s defensive front.  That surprised me a little, because I think there’s some real talent in the USC defensive line unit.  But they did not physically dominate Fresno State.  And if they can’t physically dominate Fresno State, they either up their game in a hurry or they’re going to have some tough Saturdays against teams like Stanford, Utah, Washington, Notre Dame, and Oregon.

Giving up 460 yards to that Fresno State team is a bad sign.  To be one interception in the end zone away from a possible overtime session is even worse.  Just be thankful that Fresno State isn’t better at quarterback.  That kid made some plays, particularly with his feet, which is strange since he isn’t very fast.  But the pass that Pola-Mao intercepted – great play, by the way – is one that most of the QB’s on USC’s schedule complete.  He floated it out there and gave the safety time.  He didn’t have to.  If Fresno State had a more talented player – if Fresno State had, say, Jack Sears – they probably win that game.  That should be a little bit frightening in light of what’s coming up in the next five games.

Four turnovers is not good.  And it should have been five, because Daniels threw a ball right into the Fresno defender’s chest early in the game.  Being that this was Helton’s primary focus in the off-season and being that Fresno State isn’t exactly the best defense USC will see, this is pretty disappointing.

It’s frustrating to watch a senior and team captain continue to make the same undisciplined mistake over and over.  The defensive end cannot chase the running back in the read option.  Stop. Doing. It.

And you can’t catch a punt at the five-yard line.  That thing happens occasionally, and it only happened once last night.  But after putting up with an entire year of circus stunts at punt returner two years ago, that play brought back a bad case of déjà vu.

And some plain bewildering:

Are you kidding me with the penalty on the opening kickoff?  That is exactly the kind of sloppiness and inattention to detail that you expect from underperforming programs.  That turned into about a 45-yard penalty because the coaches simply didn’t do their jobs.

And why is USC snapping the ball with 20 seconds on the play clock when they should be in four-minute offense mode?  I don’t blame the freshman QB; he’s got plenty to worry about and is probably just trying to make sure he remembers the play and knows where people are supposed to line up.  But it’s stunning that the coaching staff doesn’t tell him immediately to let more of the clock run before snapping the ball.  Again, sloppy and a failure to pay attention to the details.

Stanford didn’t look great yesterday, and we don’t know if Costello will play.  But they’ll be ready.  This will obviously be a huge test and a giant step up in the quality of competition.  I’m pretty sure Stanford expects to push USC all over the field.  I really hope that doesn’t happen.

Oregon choked that game away yesterday.  (I hope it hurt bad.)  But that Oregon team is good.  Those guys play fast, aggressive, and physical.

Like many of you, I love college football.  And I like it that ESPN, SI, and others are recognizing the 150th anniversary of my favorite sport.  I also understand that best-of lists are almost always subjective and should only be taken half seriously.  Still, somebody needs to help the editors of SI with some of their lists.

Let’s leave the Trojans out of this for a minute, because while I think number five might be a touch too low, it’s not ridiculous.  But I have three major problems with this list.

Second, even more ridiculous is Oklahoma at number 10.  You can make an argument for OU being in the top three, and OU almost certainly has to be in the top five.  But number 10, behind teams like Tennessee and Penn State?  Has SI actually paid attention to college football?  That’s embarrassing.

And Texas at number four?  How?  Not based on titles.  Or Heismans.  Or importance to the sport.  No way Texas is ahead of USC, Notre Dame, or OU.  These lists may be subjective, but that’s not even arguable.  At best, Texas has to be behind Bama, Ohio State, Michigan, USC, Notre Dame, Nebraska, and Oklahoma.  That means they’re eighth at best.

And let me lodge a complaint against their top rivalries list, too.  USC-Notre Dame at number five?  Look, I understand the Army-Navy ranking, and depending on what you’re looking for, you could put that one at the top of the list.  In terms of actual football and national importance it hasn’t been great for 50 years, but the traditions and personalities involved are amazing.  You can put that where you want.

Texas-OU?  Great rivalry.  But it’s not better than USC-Notre Dame.  For most of the last 50 years, the Texas game wasn’t even OU’s best rivalry game: OU-Nebraska was.  And only die-hard college football fans and people in Oklahoma or Texas really care about that game.  You can’t put OU-Texas ahead of USC-Notre Dame.

And Alabama-Auburn number one?  That’s absurd.  Auburn is barely a top-20 program all-time.  Even in its own state, only about 15% of people actually root for Auburn.  Auburn is the traditionally about the fifth-best program in the SEC.  Auburn is Washington with humidity; it’s UCLA with manlier uniforms.  I know Alabama and Auburn hate each other, but there’s no way that’s the best rivalry game in college football.

You can paint a boat.  You can scrape off the barnacles.  You can give its engine a tune up, or even give it a new, more powerful engine.  You can upgrade its navigational and communications equipment.  You can even find some young hotshot who you think will be great at manning the wheel.  But none of that matters if the fundamental problem is that the boat is dragging its anchor behind it.  You’re not going to solve your boat’s performance problem until you solve that anchor problem.

Fight On and beat Stanford.