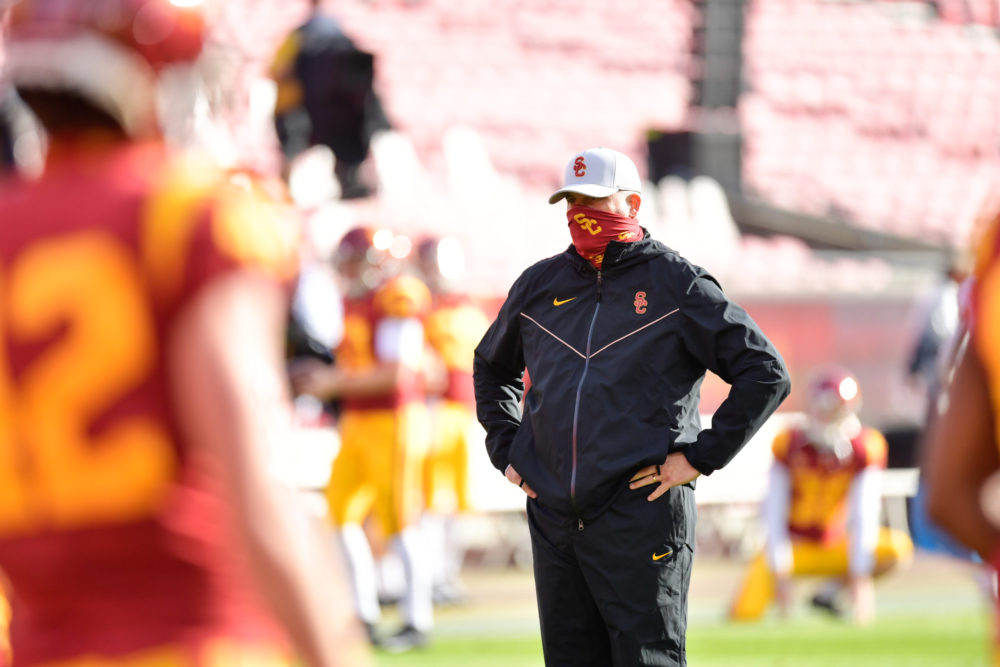 No, seriously, don’t worry about it. It’s just part of the job. You don’t even have to thank me. I do the hard things so you don’t have to.

Clay Helton recently had an interview with Fox Sports personality RJ Young. I watched that interview – hard thing! – and because I took one for the team, you guys are off the hook.

Just kidding. I only watched about five minutes of it.

And, no, I know what you’re thinking, but I didn’t launch the laptop out the window. The windows in that room don’t open. So after five minutes of interview, I spent five minutes frantically trying to open the windows. When I couldn’t do it, I sat down, tired and dejected, but with a still-working laptop, and having learned an important lesson about what can happen when you make bad viewing choices.

But here’s the bottom line: in those few minutes of taking softball questions, Helton was positively giddy about the future of USC’s offense. Helton said that USC’s offense has been about a 35 point-per-game offense, but he thinks in year three of Graham Harrell’s tenure it could be a 40+ ppg offense.

That’s all I saw. Sorry. But we can at least dissect that one piece. Here goes: Helton’s first statement is factually untrue; his second statement is not grounded in reality.

What’s the difference between 32 ppg and 35 ppg, you ask? Usually, it’s about the difference between being in the top 15 for ppg rather than top 30. That’s significant. And if you look at expected win totals, it clearly matters. For example, if you increase USC’s ppg to 35 from 32.5 in 2019, USC’s last full season of competition, you get a Pythagorean expectation of 8.03 wins versus 7.55 wins that season – in other words, statistically those extra 2.5 ppg would have been worth an extra half a win, which is no small matter in a 12-game season.

In any event, when Clay Helton asserts that USC has been a 35 ppg team, he is stretching the truth considerably. USC has not scored 35 ppg since Sark was the head coach.

Yet Helton thinks this USC team is going to bust right past that so-far-unreachable mark of 35 ppg and crash through the 40-point barrier.

Hey, stop screaming. Let’s talk rationally for a minute about what it would mean to score 40 ppg.

There are 65 teams playing in a Power 5 conference. Here are the number of Power 5 teams who have scored 40 ppg or more over the last five years:

That means, on average, about 5 of 65 teams score 40 ppg each season. Scoring 40 ppg puts you in truly elite company.

But, you say, it might be easier in the Pac-12. After all, the Pac-12 isn’t known for dominant defenses.

Nope. In the full seasons that Clay Helton has been the head coach at USC, here are the Pac-12 teams that have averaged 40 ppg:

Well maybe USC is on the verge of returning to Pete Carroll levels of dominance. Didn’t USC score 40 ppg much of the time during Pete Carroll’s tenure?

The bottom line is this: the RJ Young interview is classic Helton. The entire world sees mediocrity, and Clay Helton sees a glorious future just around the corner. (We’re almost great, guys! Honestly!) It’s overcast and rainy, but Helton is still wearing sunglasses and sunblock. Every time he speaks, he makes bold, overly optimistic statements that aren’t based in any real-world evidence or logic. We’ve seen this act before.

Do you want a realistic prediction? The Trojans are likely to be somewhere near the conference median in 2021. If you think this offense will be better than Clay Helton’s average offense, you might expect just a tick over 32 or 33. If you think the offensive line might hold the Trojans back (that or, say, the absolute unwillingness to develop a running game, throw to the TE, use misdirection, etc.), then somewhere closer to 30 ppg is about right. Either way, if you had to bet the mortgage payment on whether USC will be closer to 40 ppg or 25 ppg, I’d recommend going with 25.

How long, Carol?! How long must we suffer so?!

There has been a lot of talk about the new NCAA transfer rules. I will admit, if Jay Toia transfers to UCLA and suits up in the Bruins’ opener, I will be irritated. Still, I’m fine with the new transfer rules. Coaches come and go freely. Schools routinely mislead kids about a great many things during their recruitment. And if you’re 17 or 18, it’s easy to find yourself somewhere you just don’t want to be. One free do-over makes sense.

Besides, this rule is great for programs like USC. Maybe not immediately. Let’s face it, until USC solves its leadership crisis, this program won’t be elite no matter what the transfer rules are. But for the most part, this rule helps the blue-blood programs. It makes it easier to get rid of guys who don’t pan out – tell them they’ll never play and push them to jump in the portal – and it makes it easier to fill holes in your roster with guys who were underrecruited out of high school but have really blossomed at a less-prestigious program.

If USC ever gets around to hiring a good football coach, the new transfer rules will allow him to fill holes in the roster quickly. I’d expect at least four or five high-impact transfer starters in year one.

After talking about UCLA’s opener in the last section, I took a quick peek at the Bruins’ schedule. Ouch. LSU in game two. On the road against Washington and Utah. The Ducks are on the schedule. That’s four likely losses right there, and that’s before you get to ASU, Stanford, USC, Cal, and the many other games that the Bruins could easily lose.

We may be nearing the end of the Chip Kelly experiment at UCLA. Let’s enjoy it while we can.

Prediction time: the Pac-12 will find a partner – either Fox or ESPN – for the Pac-12 Network. Going at it alone turned out to have been a disastrous decision, both because the conference can’t get its product in many households, and because with the other major conferences partnering with either ESPN or Fox, the two major college football networks have a vested interested in promoting those other conferences.

Prediction Number Two: the next time the Pac-12 gets around to dividing the money, it won’t all be divided equally. Some amount will be set aside for payment based on performance. It’s an easy matter to provide more money to the teams that draw the most eyeballs. It’s viewership that drives how much the conference can make from the networks, and viewership statistics are known. They’re public. Everybody knows which programs matter and which don’t. It makes no sense to give the same payment to teams that do nothing to drive ratings.