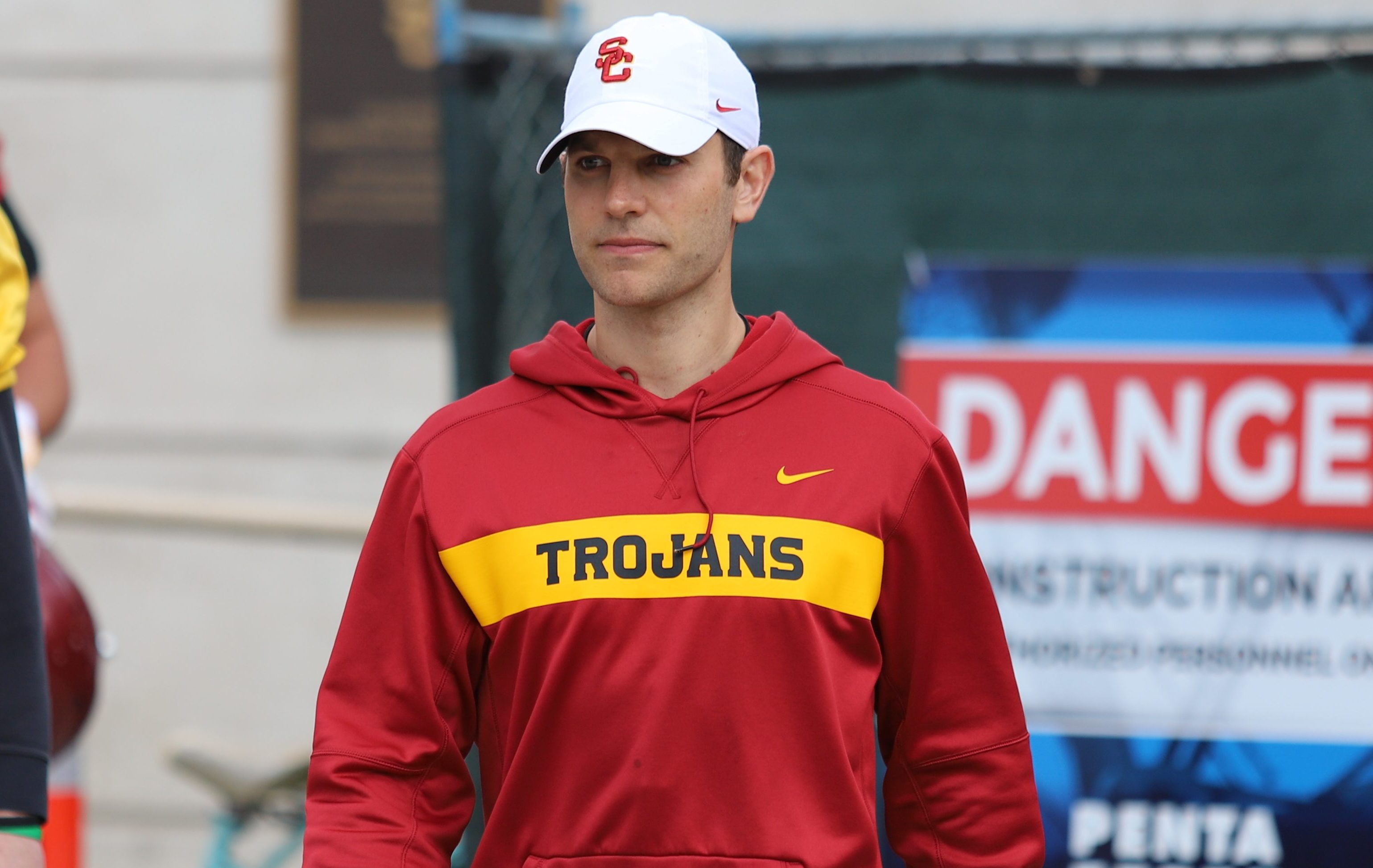 I asserted in last week’s Musings that USC would likely be a much better football team in 2019 than 2018. I base that conclusion, in part, on changes to the coaching staff and Clay Helton’s stated emphasis on improving team discipline. But I also reach this conclusion for the simple reason that USC in 2018 was historically bad for USC football, and it’s hard to be historically anything (good or bad) two years in a row.

This logic certainly applies to the offense, our focus today. How bad was USC offensively in 2018? By some critical measures, USC had a worse offense than Oregon State. No, not the Chad Johnson and TJ Houshmandzadeh Oregon State. Last year’s Oregon State. The 2-10 Oregon State that lost to Cal 49-7. The Trojans tied Oregon State in scoring offense (90th in the country) and were well behind Oregon State in total offense (the Trojans were 83rd in country). We did crush OSU in yards-per-play. (Take that, Beavs!)

USC will be better in 2019. How much better will obviously determine not only wins and losses next year, but probably some careers as well.

Why will USC be better offensively? Let’s start with personnel. I know there are question marks, and we’ll get to those. But how many teams in the country can say that their top four receivers and top three running backs will all make NFL rosters, and that most of those players will receive NFL checks for many years?  (I’m not even including 5-star incoming players like Kyle Ford.) No team in the Pac 12 and few teams nationally have the wealth of skill talent on offense that USC has. And few teams have the athletes defensively to match up with all those guys … when USC is coached well enough on offense to generate mismatches.

And that’s really the question now, isn’t it? Let’s face it: we know relatively little about Graham Harrell. But he does seem to have an offensive philosophy, one that he learned from some pretty good offensive coaches. It seems strange to say this – you know, USC being a major college football program, and one that happens to have lots of hardware in the trophy case – but having a clear offensive philosophy is probably already an improvement over what we’ve had.

The buzzword this spring has been “simplify.” And I can see the appeal of having an offense that the team understands so they think less and play faster more. But I do wonder whether complexity was really the problem with last year’s offense. How complex can an offense be when casual fans who have never played or coached the game can predict play calls with 60% accuracy? Last year’s offense made anybody with a TV and an IQ over 75 into a Tony Romo impersonator. (“It looks like they’re going to hand it to the halfback off-tackle, Jim. Yep.”) That’s not complexity. How USC can have receivers running into each other because they don’t know the routes when Aunt Edna literally knows what play is coming before the snap even sails over JT Daniels head is beyond me.

Listen, the problem last year wasn’t complexity, at least not any kind of complexity that involves unpredictability and surprise. Last year’s offense had the complexity of an iPhone; yes, there may be some stuff inside that is confusing to some people (mainly USC coaches and players, I think), yet we still can predict with accuracy what it’s going to do every time.

I believe part of the problem for some time now was USC’s tendency to pick bits and pieces of other offenses that work and then run some bastardized version of that play or set in a Frankenstein’s monster offense. Chip Kelly dominated the conference with the read option. We can run the read option too! Of course, Kelly’s version was an option; the QB could give it to the halfback, keep it, or throw it to the wideout on his side. USC took away both of the latter two options and just ran it to the halfback, allowing the defense to know exactly what is coming. It was the equivalent of running the wishbone and always handing it to the fullback. That’s not complex. That’s just weird. (In fairness, the Trojans did sometimes throw the slant off that play, something that Ohio State apparently scouted before the Cotton Bowl.)

So, yes, while I don’t know much about Graham Harrell, I would be stunned – stunned! – if he isn’t a significant improvement running the offense. This offense will move the ball and score points. It will. Because Graham Harrell will do at least an adequate job of getting the ball to playmakers in space, and USC has a whole lot of playmakers that can do something if given the ball in space.

Are there question marks? Sure. Start with the most important position: we still don’t know what USC has at QB. Half of the USC community is pumped about Jack Sears, and I love his athleticism and what he did as a high school senior. But he couldn’t beat out a true freshman last year because of his inconsistency in practice. That has to be at least a little troubling to those wearing “Jack Sears 2019” T-shirts. And JT Daniels? He was a true freshman last year, so the guy gets a mulligan. But, make no mistake, he needs a mulligan. When confronted with a pass rush and adversity for the first time in his young life, his mechanics and decision-making melted down. And there are real questions about his leadership.

Now I suspect USC will be okay at QB, because Sears and Daniels both have talent, they were young last year, I’m assuming Graham Harrell is competent, and whoever wins the job has tall, fast, former 5-star Devon Williams as his fourth best receiver. That’s pretty ridiculous. I also suspect that Tim Drevno will get this snapping issue under control, so the USC quarterbacks don’t look like they’re stabbing the air trying to find bills in one of those cash grab machines at the start of every play.

And that brings us to our annual conversation about USC’s offensive line. Look, guys, I don’t know what to tell you. Tim Drevno is a good coach. That will help. The offense will be better coordinated. That will help. And these guys are blocking for what amounts to the US Army All-American roster at the skill positions. (That’s not even much of an exaggeration.) Those are some pretty good building blocks. If Bob Dylan is writing the songs and Slash is playing lead guitar, how good does the rest of the band have to be to have some modicum of success (including being better than a 2-10 Oregon State offense)?

USC’s offense won’t fail this year. The offense will move the ball. It will score points. Those skill position athletes will make some big plays. I think this offense will be in the top 3 in the conference in yards and points. I really do.

But that’s not what will decide the team’s fate this season. Hanging 40 on a team like Arizona or Colorado is fine. But the question is whether USC can have success against better football teams, and maybe most importantly, whether USC can do anything on the ground. Can USC pick up a 3rd and 1? Can the offense run out the clock up a score with three minutes remaining? Can it punch it in from the red zone, when passing lanes shrink? We haven’t seen success in those areas in a long time, and I question whether USC even runs the type of practices that you need to run to get good in those areas. Besides, Air Raid offenses aren’t exactly known for their ability to bully the defense in obvious running situations.

So I expect a much better offense, a good offense, but one that will probably lack the physicality to be well-rounded. In any event, this is a no-excuse year. JT Daniels isn’t the only one who was given a mulligan for last year. Clay Helton has that USC has as much talent as any team on the schedule. We agree, coach, and the question is whether that talent will shine on Saturdays or will continue to hover in Oregon State territory next year. Clay seems optimistic, but then again, doesn’t he always? He was optimistic before last season when he said the team was on the doorstep of winning a national title, and he was optimistic right as the wheels were falling off last season when he told us to just wait until November. Hopefully that optimism will ripen into production this year. We’ll see.

There’s been a lot of chatter about the difficulty of USC’s schedule next year, and the chatter is justified. But a lot of posters are talking like the real schedule starts with Stanford. I’m not sure about that. Keep an eye on Fresno State. Longtime USC fans already know what it means to Fresno guys to play at the Coliseum. Reggie had to pull out a cape to beat those guys in 2005.

And this Fresno program is good. Those guys were 12-2 last year. They blew out UCLA, beat Boise State in the conference championship game, and beat Arizona State in their bowl game – which means they probably would have won the Pac 12 south. And Jeff Tedford is a good football coach. Tedford was always talked about as a quarterback guru, and he needs to be since he’s breaking in a new QB. But I think he was always more impressive building running games. USC had all the recruiting juice when Tedford was at Cal, but Tedford was the guy who kept recruiting and developing running backs: Marshawn Lynch, Jahvid Best, JJ Arrington, Justin Forsett, etc. Even with a new QB, don’t be surprised if Tedford finds a way to gear up a running game. And after the way USC has handled running games in the opener the past three years against Alabama (242 yards), Western Michigan (263 yards!), and UNLV (308 yards!!), don’t take that Fresno team for granted. USC better bring its big-boy shoulder pads for that opener.