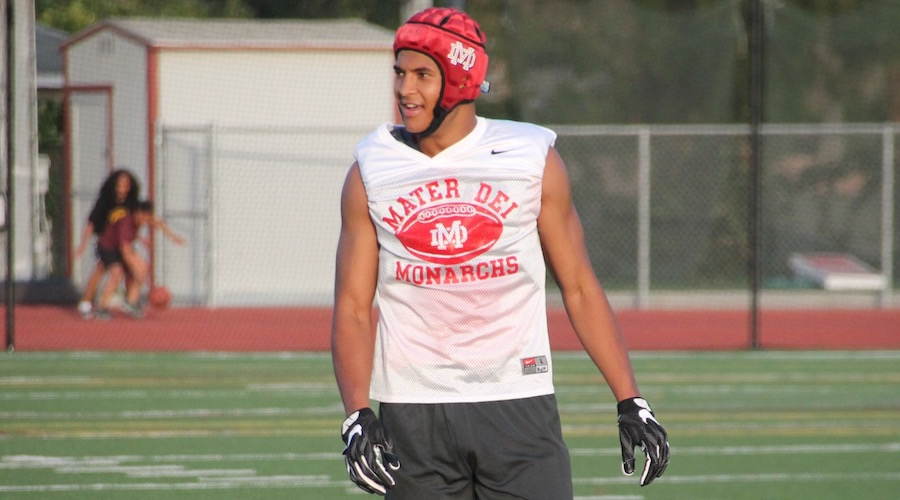 It took Odysseus – a guy who really knew how to set his jaw – ten years to get home from Troy. It may take Clay Helton even longer to lure somebody back to Troy. I thought for sure USC would have an offensive coordinator in place before signing day. Now I’m wondering if we’ll have one in place before opening day. Worst-case scenario? I guess that USC plays without one. Like last year.

Let me see if I have this right: Clay Helton will be around for the next 15 years, Kliff Kingsbury stayed for 15 days, and Bru McCoy stuck around for 15 minutes. Is that about right? I don’t think I’ve ever heard of a 5-star recruit transferring before attending even a single practice.

Most Trojans are probably assuming that McCoy is leaving because Kingsbury left, and maybe that’s so. But how much sense does that really make? And, no, not because you choose a school for the school and not for the coach. Of course these kids should consider the coach. If you’re a 5-star recruit, you need to be developed well and you need to perform well to get millions of dollars. It’s foolish not to consider the coach at least a little bit. But what did McCoy think was going to happen? Did he think Kliff Kingsbury was going to stick around at USC for three years? Everybody knew the guy was just passing through. I thought he’d give us a season, but I wasn’t convinced he was going to unpack his suitcase. If he turned the offense around, he’d be gone for greener pastures. If the offense looked like more of the same, he’d be thrown out with all the rest next year. McCoy couldn’t possibly have expected Kingsbury to be here for the long haul; did he? I have to assume there’s more to the story.

What do you call an organization that has only one thing to promote to its customers, and that one thing is the expected performance of a temp employee who just got fired from his last position and is looking to get a different job as quickly as possible?

What do you call that same organization when the temp decides not to bother showing up for work?

People used to argue whether the biggest USC rivalry involved UCLA or Notre Dame. Ah, the good old days. Now USC’s biggest rivalry is Rick Caruso versus Ed Roski. Or maybe it’s Wanda Austin versus James Ellis. Or Michael Quick versus Reason. (Can anything take this guy down? Edwin Edwards, the former governor of Louisiana and, naturally, a convicted felon, once said that he would lose the upcoming election only if “I’m caught in bed with a dead girl or a live boy.” I’m beginning to think that Quick might survive even that.) In any event, the wealthy business leaders that run USC and advise the Marshall School of Business have gone full WWF-style Battle Royal. Last one still in the ring gets to call the shots.

The extent to which this Billionaire Fight Club impacts USC football is still unknown. On one hand, it might be difficult to make any major decisions at the university when every member of the Board of Trustees is on the verge of seeking a temporary restraining order against every other member. Or maybe this is the best time? Who has time to pay attention to the firing and hiring of a football coach when everybody is caught up in Tupac v. Biggie, Real Estate Mogul Edition? Lynn Swann could fire Clay Helton, re-hire Paul Hackett, disband the Spirit of Troy, and expel the Song Girls from the university, and the BOT might not discover any of that for the next 18 months.

Part of the difficulty here is even understanding what is behind the high-profile fighting. If all we’re seeing is that some portion of the BOT is joining with the USC community to push back against an administration that has been far too secretive, unaccountable, and blinded by the acquisition of money whatever the cost, then it’s probably a fight worth cheering. But is there more to it than that?

I’m going to pause to offer two warnings here. First, this discussion obviously goes well beyond USC football. If you’re not okay with that, stop reading. But, let’s be honest: very little is happening in USC football right now, and the stuff that is happening isn’t new. There is little point in beating a very dead horse about the current dismal state of USC football, at least until something new happens. We all know the score already. The most important thing for the long-term health of USC football may be the outcome of this board fight, since the survivors will pick the next president. So while this isn’t completely a football discussion, it matters to the future of USC football.

Second, I approach the subject as an interested and sympathetic outsider. I didn’t attend USC as an undergraduate. I have been humming the fight song, visiting the Coliseum, and living and dying with USC football since I was a small child. I badly wanted to play football at USC, but I wasn’t big enough, fast enough, or good enough for USC to be interested. I graduated from USC with a law degree, but attending law school is obviously different than attending as an undergrad. There was little about my law school experience that was distinctly Trojan; it probably wasn’t much different than if I had attended Duke or Northwestern. So I don’t have the experience with USC as an undergraduate that many of you have, and I concede that this fact might make some of the infighting a little less accessible to me.

But I can’t help but wonder if some significant portion of the decision-makers at USC aren’t embarrassed by and looking to escape USC’s past. And I don’t mean USC football’s current style of play, although that is clearly a departure from tradition (But I’m not sure it’s an intentional departure. USC didn’t have a long-term plan to copy Washington State football. I believe Clay when he said he wanted to build a tough, physical football team like the storied Trojan teams of the past. He just doesn’t know how. It’s an accident that USC has drifted from its roots a copycat spread attack).

But the university now appears eager to walk away from what makes it distinctive. Its me-too-ism (yep, I made up that word right now, like a far-less-gifted Shakespeare) seems intentional at this point. USC has long been famous for three things: USC football, the Song Girls, and Traveler. Is that embarrassing to USC decision makers? The failure to take the obvious action with regard to Clay Helton this offseason seems to suggest that USC doesn’t care about football, or at least doesn’t care as much as it used to, or as much as the fans do. USC football is an iconic brand, with traditions and personalities that made USC distinctive for people all over the country. Is USC now too embarrassed to be known as a football school? Would it rather be a former football power – you know, like Yale?

(Psst, Traveler. Watch your back.)

So too with the university. USC has raised giant sums of money and has used that money to climb the US News and World Report rankings. And that’s fine, I suppose. It is nice to be recognized for achievement. But USC’s highly publicized fundraising is … to what end exactly? Is the goal merely to be just like all the other highly rated universities and climb the rankings until USC inevitably runs into the dozen or so universities that it will never pass in the rankings? What kind of goal is that? What is the slogan? “USC – like Stanford, but not quite as highly ranked.” What is distinctive, what is particularly Trojan, about the course that USC’s leadership has set?

There was a time when USC’s critics derided it as the University of Spoiled Children. There was more than a little bit of envy in the epithet. But USC was seen by many – as a high school student, it was seen by me – as the school for Southern California’s elite, a school that turns out future entrepreneurs and business leaders. Moguls more than egg heads.

Which is not to say that USC should be a school only for the upper class. USC was right to reach out to its surrounding community and provide opportunity to those near the university who had talent but few benefits of upper-class birth, kids who were far from being “spoiled children.” We should be proud of USC’s efforts in that regard.

But what is the push now? To educate the elite of the People’s Republic of China? Apparently about 11% of USC students are from China. I don’t mean Chinese-American. I mean Communist China, a country still run by a repressive, totalitarian gang of thugs. Can USC be friendly to that regime without changing the character of the place? Mustn’t you sell at least a little bit of your soul to stay friendly with a regime that imprisons and murders dissidents and those of disfavored religions?

Well, at least you won’t have to work as hard to sell your Title IX hearing procedures, your free-speech restrictions, and the Politburo-like power plays to the student body. It will just look like business as usual.