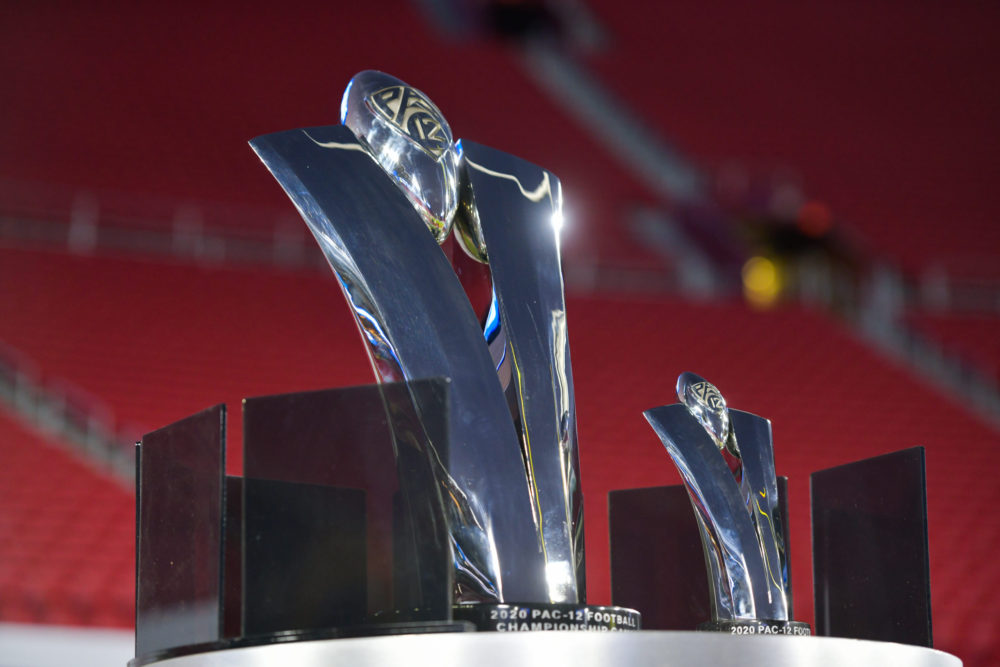 So Larry Scott is out after only eleven years at the helm? Is that really enough time? I thought he’d need 12-15 years to truly put the Pac 12 in a position from which it could never recover. Firing him now leaves the job only 96% finished.

And congrats to the Pac-12 presidents on their splendid decision-making. I’m not one to tout those running colleges and universities these days. There seems to be an inverse relationship between the amount charged for tuition and the amount actually taught to students, and it’s not entirely clear that we’re better off with a 3,000 percent increase in the number of university administrators, all of them looking for causes they can take up and mischief they can cause. I can’t say I love the direction our universities are headed. But at least the Pac 12 presidents got this Scott decision right. And it only took eleven years!

Remember that scene from the old 1980’s Twilight Zone movie where the airplane passenger looks outside and sees the little monster hammering away at one of the plane’s engines, trying to destroy it?

If the Pac 12 presidents were the board of directors for that airline, they would have given the monster double the salary paid to any employee at any competing airline and a palatial office from which to destroy their airplanes. And they would have kept him in place for over a decade. I hear the Unibomber and Heath Ledger’s Joker are on their short list of potential Scott replacements.

USC’s tight end coach got hired away by another university? I was surprised to hear that somebody else wanted one of Clay’s assistants, of course. Other than Deland McCullough, it’s hard to remember too many times that has happened. I think the ratio of fired assistants to assistants hired by other programs is somewhere around 10:1 at this point.

But a USC assistant getting hired away isn’t what surprised me the most. I’m a USC fan; I obviously understand by now that just about anybody can get hired as a football coach. That somebody was willing to take a shot at a Clay Helton assistant that only 4% of die-hard USC fans could even name is surprising but not shocking.

No, what really shocked me is that USC had a tight ends coach. Really? What was the guy even doing? It looks like USC tight ends had 11 catches for 64 yards last year. I don’t know what the guy was making at USC, but it seems likely he was getting more money per-yard than any assistant coach in college football.

So, again, what was he doing? Surely not practicing run blocking. And why does USC dedicate a full-time coaching position to a position group it barely even uses? What’s next? Can we get a full-time fullbacks coach, too? Maybe a full-time coach for punt team gunners or the hands team?

There are rumors that USC is trying to steal from Texas a football administrator. He sounds like he’s good at his job. It might be a good hire if it happens. Cool. I actually like a number of USC’s football recent hires. But I’m not going to analyze any of them. I’m not going to be excited about any of them. Because they don’t really matter at this point. Imagine that you spent hundreds of thousands of dollars on a fancy new engine and a supercharger for your muscle car but you keep a governor on the car that doesn’t permit it to go faster than 47 mph and you hired an 83-year-old woman to drive it.

And let’s not go overboard praising USC’s hiring just yet. Alabama last year had Butch Jones, Major Applewhite, and Charlie Strong as analysts. These guys weren’t even assistant coaches for Alabama. When a program has guys that are every bit as qualified as Clay Helton serving as mere analysts, you’re
dealing with an entirely different beast. So, yes, Clay Helton should not be leading a blue-blood football program. But one of the underreported differences between programs that are fully committed to football success and USC is the difference in the quality (and quantity) of the staffs. When Clay needed an offensive coordinator, he hired a kid from North Texas. Alabama just hired Bill O’Brien for its opening. Sark needed an offensive line coach and hired the guy from Alabama. Saban needed an offensive line
coach and hired a former NFL head coach. Clay needed an offensive line coach and hired another guy from North Texas who is friends with the current, mediocre offensive coordinator. The guy may prove to be good; we’ll see. But it’s not exactly inspiring. Unless he was the guy at North Texas responsible for drawing up game plans against zone defenses. Then I’m all in.

Oh, by the way, Steve Sarkisian will fail at Texas. Sark is capable of drawing up some plays that get great athletes in space, particularly when his offensive personnel are significantly more talented than the opposing defense. But there’s a lot more to being a head coach than X’s and O’s.

There’s something broken about the culture at Texas, and there has been for a long time. The idea that Steve Sarkisian of all people will fix a broken culture is laughable. This has nothing to do with drinking or not drinking.

When Sark is working for two of the greatest head coaches of this generation, those guys’ strengths can cover up Sarks’ weaknesses. But that won’t be the case now. He – not Nick Saban; not Pete Carroll – will be responsible for instilling discipline, work ethic, and toughness in a program. I don’t think he can do it. Five years from now he’ll be an offensive coordinator again. And Kirk Herbstreit can go back to touting him for the latest head coach openings.