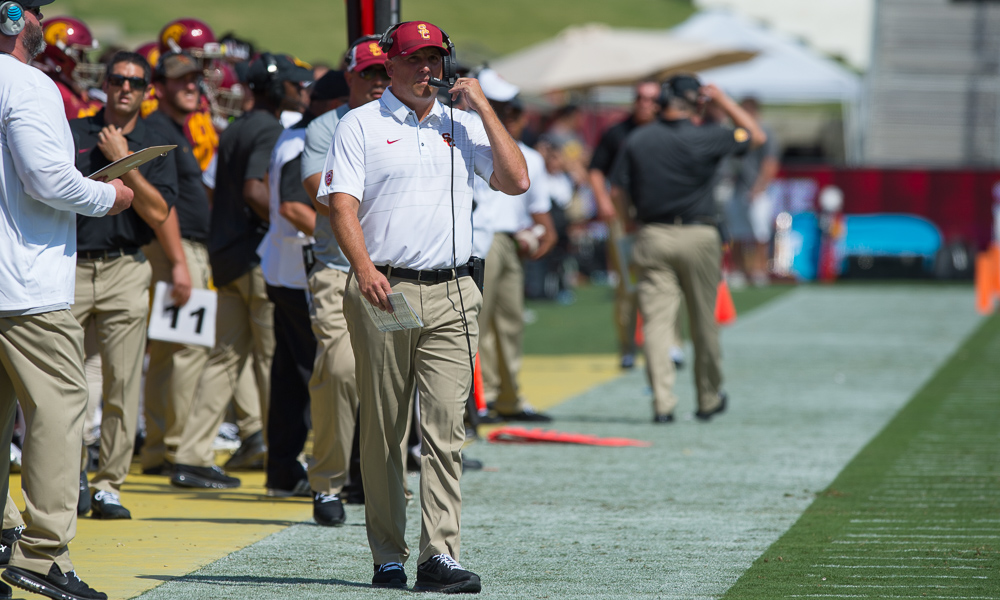 You cannot fix a problem unless you accurately diagnose the problem. I probably don’t have to tell you that USC football is in a bad place or that Clay Helton is facing a crisis of confidence amongst fans, recruits, and if the transfer portal is any indication, players.

Lynn Swann told us Clay Helton had a plan to get USC football back on top. And yesterday the USC public relations team published an article on Clay Helton and his efforts to turn the program around this offseason.

Let’s start with the key quote from Clay Helton, and then we can analyze it:

“During spring ball, we not only will continue to develop our players—a process that started with our January workouts–but we will focus on our attention to detail when it comes to fundamentals and technique, penalties and turnovers. That must improve for us to be back at a championship level. In 2016 and 2017, we did those little things well and we won a Rose Bowl and a Pac-12 title. Last season, those things cost us close games down the stretch (USC’s last four losses were by 7 points or less). My total focus this spring, therefore, will be on the discipline of the game. I’ll let our coordinators install scheme and system.”

So, no, there was not a dramatic difference in penalties or turnovers between 2018 and the two prior years.

Clay also implies that we should be less worried about the 2018 record because USC lost so many close games. He says “those things cost us close games down the stretch” and the writer of this piece notes that “USC’s last four losses were by 7 points or less.” It’s not clear why this should matter. Three of those four opponents were lousy football teams, too. USC lost a close game to a Cal team that had no offense; I mean that literally, as I think the bus taking Cal’s offense to the Coliseum got lost. Even half-way decent teams win home games against that Cal outfit. The same is true of Arizona State, a six-loss team that got beat by San Diego State and Fresno State last year. And do I have to talk about the insanity of pretending there is something noble about a 7-point loss to a 2-9 UCLA team – a game where USC’s failure to do “little things” allowed a UC Davis transfer to rumble for almost three bills and set the rivalry rushing record?

Further, you can’t complain about close losses when close wins propelled you to your extension. I analyzed once before that prior to 2018, Clay Helton was remarkably fortunate in close games.

That 2017 team by the numbers should have been somewhere around 8-5. It was nowhere close to a great team. It was an above-average football team in a weak conference that got very fortunate results in close contests. In 2018, USC’s run of luck in close contests ended, as it inevitably would.

Helton genuinely thought after the 2017 season that the program was on the verge of competing for national titles, and he even said so publicly. He didn’t see what so many of us saw so clearly: that USC was behind the elite teams in terms of scheme, that its offensive coordinator was in over his head, that the coaches responsible for the offensive line and cornerbacks were not cutting it, that the team was undisciplined, and that the entire program appeared to be soft and a little bit lazy. When a coach in your conference tells a reporter that USC was the softest team they saw all year, you’re staring at an imminent crisis, not a national title.

USC football has a culture problem. Lynn Swann said so himself. Saying USC didn’t do as well in the “little things” and talking about how many of the losses were close is Clay’s attempt to convince somebody – us? Lynn Swann? himself? – that 2018 was a minor blip and not a sign that the wheels have come off.

So it’s Graham Harrell to run the USC offense. I’m in favor of the hire. No, this is not enough of a change to alter the trajectory of the program. (See unhinged rant above.) And I’m still not convinced that the move to the Air Raid is really in USC’s long-term best interests. But the hire does tell us two things. First, Helton has for the second time in the last two months hired an offensive coordinator that is well-regarded and was desired by other programs. It sounds ridiculous to have to say that, but USC’s hires don’t always check those two boxes. Second, this hire shows that Clay Helton really did have a vision for the USC offense, and when he couldn’t get his first choice to implement it, he went out and found another respected coordinator that runs a similar scheme. Had Helton hired Tim Drevno, we would have known either that Helton couldn’t land the coordinator(s) of his choice or that he did not have any clear idea about where he wanted to go, because it would have been hard to justify hiring an Air Raid guy one month and a Jim Harbaugh disciple the next. So the consistency is a good sign.

He’s not the slam-dunk hire that Kingsbury was, however. Kingsbury was the architect for Texas Tech’s offenses. With Harrell, it’s hard to know. North Texas had some success in Harrell’s three years there, but we don’t know how much of this is due to Harrell and how much is due to North Texas’s head coach, Seth Littrell. Littrell is an offensive guy who coordinated offenses at Indiana and North Carolina before taking the head job at UNT. When a coordinator works for a head coach who specializes on the same side of the ball, you don’t necessarily know who deserves the credit. Nick Holt was the defensive coordinator for one of the best defenses in recent college football history. But he worked for a defensive wizard, and I haven’t heard many people talking about Nick Holt’s brilliance as a defensive mind lately.

I do wonder, though. Lynn Swann apparently agrees with Helton’s plan to move USC to a spread offensive attack led by someone in the Mike Leach coaching tree. But if that’s the direction Lynn Swann thinks USC should be moving, why not just offer $6 million to the Pirate himself? Then you know you’re getting the most-successful practitioner of that offense and someone who is a first-rate head coach. Hire Graham Harrell to work under Clay Helton, and you don’t know if you have either one of those things.