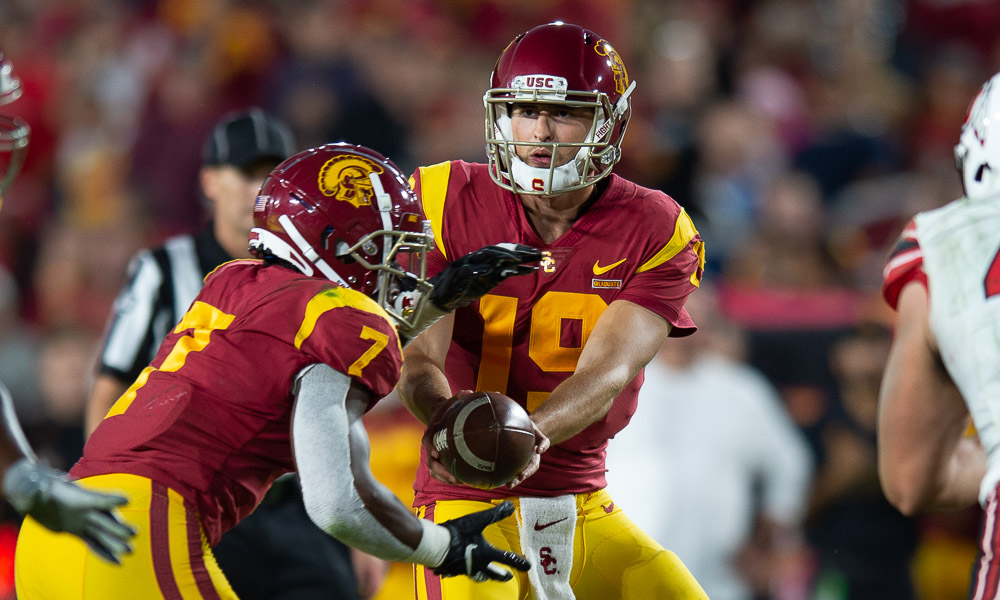 Can we pause for a minute, put the big picture aside, and just feel good for Matt Fink?  I don’t know what Fink’s future is as a USC QB.  He may have other chances; that may be it for him.  Either way, what a great, gutsy performance from a great Trojan.  You could tell in the post-game interview how emotional he was, and I’m guessing his teammates are thrilled for him.  I have no problem with quarterbacks who are buried on the depth chart looking for a soft landing spot elsewhere.  When your career dreams are at stake, you do what you must.  But I’m also thrilled to celebrate one fantastic night for a kid who hung in there because he loved his teammates, even knowing that he would probably never be the guy.  Congratulations, Matt Fink.  Whatever happens from here on, you and many thousands of Trojan football fans will always remember your very special night under the bright lights.

Last week I questioned whether Clay Helton was right to call his players “warriors.”  I commented that they didn’t appear to be playing like warriors; I didn’t see guys flying around, smacking people, and playing with fire.

Well, we saw it against Utah.  That was not a pretty game.  USC didn’t always play sound, assignment football.  I don’t think Friday night was a blueprint for a successful season.  (More on that below.) But, man, those guys played hard. There is something to be said for leaving it all on the field, and I just don’t think there’s any doubt about USC’s effort against the Utes.

So let me give some credit to Clay Helton.  I can’t imagine any USC fan who has watched the last four years and has any understanding of football still believing Clay Helton is a good long-term fit for the program.  We all know better at this point (or should).  But I appreciate that Clay has, over the years, shown an ability to convince his players to pick themselves off the ground, put aside the embarrassment and the doubters, and come out and play hard.  Everybody recognizes that Sam Darnold was the key to USC’s turnaround in Clay’s first full season.  But a secondary and under-appreciated aspect of that turnaround is the way Clay Helton convinced his team to go out and fight to salvage their season.  He did it again last night.  Congrats, coach.  And good job.

So where does this win leave USC?

And with a whole lot of work to do.

Listen, that Utah win is not the blueprint for a successful season.  USC could not run (with one gigantic exception), could not stop the run, got substantially outgained, left the defense on the field all night, stubbornly refused to keep contain defensively (as usual), lost the turnover battle, lost another quarterback because of a whiffed block, and had to rely on downfield jump balls all night to move the ball and score points.  You’re not going to win very many games that way.  Granted, this strategy is a lot more viable when you have Vaughns, Amon-Ra, and Michael Pittman.  Those guys are so good.  And a special shout out to Kyle Whittingham and staff, who stubbornly insisted on playing their normal defense against USC, allowing USC to capitalize on the mismatches — and, honestly, every matchup with their secondary was a mismatch.  It was a good win, an important win, in many respects a gutsy win, but the Trojans were also very fortunate to win that game, and trying to win games the way our guys won against Utah is a recipe for 7-5 or 8-4, not a recipe for a Rose Bowl.

Notably, I left penalties out of my list of failures above.  That was intentional.  USC’s penalty total was unacceptable, of course, but I’m not sure what to do with that.  I guess it’s a relief that the conference paid a bunch of money for an outside group to declare that the officiating program is solid.  Because if not for that outside consultant report, I might think that Pac 12 officials are an absolute joke.  The announcers kept saying that the officials were calling the game tight but consistently.  I think a better description is that they couldn’t stay out of the way.  Both teams had plenty of reason to gripe, and I suspect the junk calls evened out in the long run.  But can I make a suggestion, Pac 12 officials?  Why don’t you stop interjecting yourselves into every damn play?  Your constant meddling clown show disrupts the flow of the game and is a real disservice to the players, coaches, and fans.  Go away.

Maybe it’s Stockholm Syndrome, I’m not sure.  But that may be the first time I ever enjoyed watching a USC defense play what was, in many respects, a bad defensive game.  Let’s not kid ourselves: we have huge problems defensively.  Much of the time, USC tackles with the level of aggression you might expect of a guy who just landed his dream job and is forced to play a pickup game against the boss’s young children.  I have no clue what has become of the linebacking corps, other than to say that they all seem to playing in the wrong positions.  And the contain is just hilarious at this point.  It’s not so much that USC loses contain too frequently.  It might be more accurate to say that USC steadfastly refuses even to recognize that contain is a relevant concept.  Our guys are conscientious objectors to containment.  They are contain-ophobic.   They’re highly allergic to contain; even the smallest dose could send them — and, at this point, the rest of us — into cardiac arrest.

That said, there were points where I found myself feeling better about the defense than I have at any other time this year.  And that made the rest of the game incredibly frustrating.  We saw some of the things we hoped to see.  Talanoa Hufanga decided to go full Troy Polamalu.  His fellow safety even looked interested in hitting some people this week.  Drake Jackson is still a budding All-American.  And the interior defensive line was attacking and disruptive.  The secondary is even growing up.  During spring and summer camp, the secondary kept a safe distance from receivers the way a group of 7th grade boys keeps a safe distance from the girls at the beginning of the first school dance.  But not now.   They’re competing.  The whole defense is.   Our guys were playing hard, and they were doing some good things, making some big plays.

Which makes the overall defensive performance so frustrating.  There was a lot of talk on the message boards about how USC’s defense is slow.  I’m just not sure it is.  Hufanga and Pola-Mao aren’t slow.  ITS isn’t slow.  Houston and Palaie aren’t slow.  Drake Jackson isn’t slow.  USC’s defense often plays slow, like they don’t know what they’re doing and don’t wish to be hurried anyway.   But the vast majority of these guys were very highly recruited, and I don’t think every program in the country dramatically overestimated the foot speed of these particular kids as high school seniors.  How likely is it that USC just happened to land all of the blue-chip recruits who managed to fool everybody with their speed whereas the other football powers landed the guys who could run as expected?

No, Clancy Pendergast has some material to work with.  But in light of how often the defense lets teams march up and down the field, we have every reason to question his ability to do much with that material.

How is it that USC embarrasses itself trying to run the football for three and a half quarters but then, when they absolutely have to run, get the job done?  Markese the Beast sent a message to Utah’s linebacker on that goal line run, which was fun to see.  But it was that four-minute offense that really surprised me.  Somehow the O line decided to get off the ball, open up holes when USC’s offense absolutely had to have them, and in the process they actually looked like a USC offensive line for four beautiful minutes.  Good work, guys.  Can we see more of that?

I don’t want to hear anything more about a “young team.”  It’s not really true, and it’s irrelevant.  Yes, the players are young; they’re college kids.  All college teams are young.  But USC is not a particularly young team.  The secondary is young, but just about every other position group is made up of guys who have been playing college football for a few years now.  And it’s worth noting that the best programs tend to have the youngest teams anyway, since the best players leave after three years.

Besides, it’s irrelevant if the team is young.  Predictions about how great a team will be in the future don’t mean very much, particularly if you authored a notorious statement just last year about how great your team will be in November.  You might want to keep predictions like that to yourself for a little while.  More importantly, this isn’t the NFL, where you can play poorly early in the year, catch fire near the end, slip into the playoffs as a wild-card team, and still make a lot of noise.  This is college football, where every game counts.  It’s an unforgiving sport, where you have to be good on day one.  Being good eventually isn’t good.

Big challenge this week.  Washington is a disciplined, physical football team.  They’re beatable; we know that.  But they’re tough, they’ll be taking USC seriously, and winning on the road is a very different animal than winning at home as Kyle Whittingham learns anew every time his team comes to the Coliseum.  Clay Helton knows it as well.  Every college coach does.  Washington at their place is a tall order, Nordberg.  But win this one, and this team has a chance to achieve some worthwhile goals.