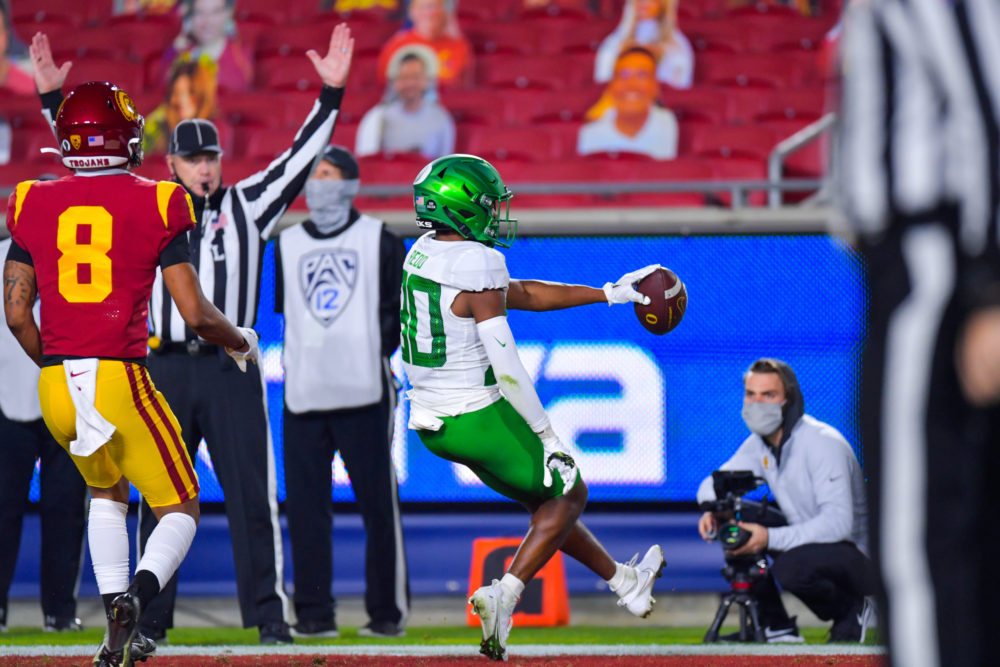 When the Clay Helton era ends – when if finally, mercifully ends – Clay Helton will have done more to damage USC football than any previous coach. I’m not saying he’s the worst coach. Paul Hackett’s tenure was three years of dental work, three years of Roseanne Barr singing the national anthem on an amp turned to 11.

But Hackett didn’t try to steal the soul of USC football. He didn’t try to alter its DNA. Hackett wanted USC to be a physical football team. He wanted a team that would carry on USC’s tradition. He was just a bad football coach. And, fortunately, he wasn’t around very long.

But Clay Helton, who has been around plenty long, has abandoned the heart of USC football and chosen to base his program on finesse. This is the coach who is notorious for being afraid to tackle in practice, who has had senior players ask if the team can practice harder, and who has turned Tailback U into a program based on a soft, gimmicky offense.

I want to focus on that latter point for a bit. We know that Helton promised physical, run-first football when he was hired. We know that because he couldn’t recruit offensive linemen, because he couldn’t develop offensive linemen, and because his job was in jeopardy, Clay Helton went with a one-dimensional, pass-only offense invented for teams that don’t have the athletes to compete with their opponents. An offense that doesn’t win national championships. And we know now that the coordinator he hired to run that offense is a young, inexperienced guy who isn’t even a master of the gimmick.

Oregon can’t stop the run particularly well. In its other Pac-12 games, Oregon gave up an average of 184 yards rushing per game. UCLA gashed them for 267. Oregon State dropped 269 rushing yards on them.

USC had 38, by far the worst rushing performance against Oregon this year.

USC also had the worst rushing performance by any team against Arizona this year.

USC also had the worst rushing performance by any team against Washington State this year.

What we’re watching is not USC football. It’s not even Washington football or Arizona State football. This Air Raid offense is something Hawaii or Oregon State should run. It’s for seven-on-seven leagues. It’s for a powder-puff game.

This is Clay Helton’s doing. It was his choice. He intentionally chose to turn USC football into Kentucky under Hal Mumme. Or, rather, a poor facsimile of Hal Mumme’s Kentucky. Mumme was at least an innovator. It might be more tolerable if the complete abandonment of physicality, the pillow-fight approach to offense, were at least innovative and exciting. But no. It’s predictable and dull. Graham Harrell was able to install the offense in two days last year because there’s nothing to it. You can fit the whole thing playbook on a napkin. Some Japanese video-game makers had it down in 1988:

You can game plan to stop USC’s offense over the lunch hour on the Wednesday before the game. Mario Cristobal probably did.

He certainly stole Clay Helton’s lunch money again. Pictures of Mario Cristobal should trigger PTSD in Clay Helton. It’s sad to watch a team of elite SoCal recruits wearing those awful Oregon uniforms and whipping USC – again – on the Coliseum floor. And the fact that Oregon does it by being better in the trenches and more committed to physical football makes it so much worse.

Things might be more tolerable if the team were at least disciplined. But no. USC leads the Pac 12 in penalties virtually every year – and this two years after Clay Helton took personal responsibility for cleaning up the penalty problem. It was 9 for 98 yards against Oregon. And some of them were absolute killers.

None of this should be taken as a criticism of USC’s players. Those guys play their hearts out and don’t quit. They don’t always play well, but they play hard, and they deserve better. Those are our guys. Every single one of them deserves our support.

I don’t mean that USC should want to have success on the ground. I’m sure Clay Helton wants that, the same way I want to be a great guitar player even though I never actually take the instrument out of the case. I mean real commitment. I mean that USC shouldn’t rush for 170 yards against a team like Arizona and declare victory as Clay did some weeks ago. That’s silly. Arizona football is a toxic-waste dump right now. Opposing teams should be advised to wear HazMat suits while playing Arizona. Mater Dei might run for 170 against Arizona this year.

No, I mean USC cannot be USC and certainly cannot be elite without a real, sustained commitment to physical running football that last all year long: through recruiting, off-season workouts, practice, and a stubborn commitment to impose your will in games.

Clay Helton won’t make that commitment. He wouldn’t know how to execute on it even if he were forced to. That’s obvious by now.

Granted, it’s hard to run when the offensive line gets its lunch handed to it on a regular basis. Drevno will receive (and may very well deserve) a lot of the blame for that. We might wonder about Drevno’s ability to recruit, as USC has certainly lost out on some big-time offensive line recruits in the last few years, often to Oregon. But how do you convince blue-chip offensive linemen to play for a program that can’t run the ball and doesn’t seem to care? Why would you play for a program that has more passing attempts than rushing yards half the time? A program that showed its commitment to its offensive linemen by keeping a clearly incompetent offensive line coach – oh, that’s just my crazy uncle, kids; he’s harmless – for three full seasons before finally letting him go?

USC will always land some good players, including some good offensive linemen. Its tradition and location virtually guarantee that. But great drop-back quarterbacks didn’t go to Nebraska under Tom Osborne, and for good reason. You go to a program that values what you do and a program that can develop you as a player.  Do offensive linemen believe that about USC right now?

Some of you will say that I’m being too harsh. Didn’t USC go 5-1? Yes. It could easily have been 3-3 or even 2-4. Had COVID not completely changed the schedule, USC would have lost at least four games this year. Don’t let legendary good fortune and a shortened season fool you into thinking USC has gotten better. It hasn’t. USC played badly against Arizona State, horribly against Arizona, and the Oregon game was a debacle. USC played one good quarter against Washington State, two good quarters against UCLA. If that’s what USC football is supposed to be – a handful of good quarters all year and a remarkable stretch of luck that makes the win-loss record far better than the actual on-field performance would merit – then I guess the program has arrived.

But the truth is apparent to those who are willing to see it. It’s been apparent for a very long time. Some USC fans were talking this week about the disrespect shown by the playoff committee. The committee didn’t disrespect USC. It might have elevated some SEC teams higher than they deserve. But USC was ranked fairly. USC was ranked as low as it was because the committee members actually watched some games, and that means they could see that USC plays bad football for long stretches virtually every week. And that’s been going on for years. It will keep going on for years if the same guy is in charge of fixing it.

It’s obvious to anybody who is not willfully blind what needs to be done. If any decision makers at USC still care, now would be a good time to do it. Hasn’t enough damage already been done?