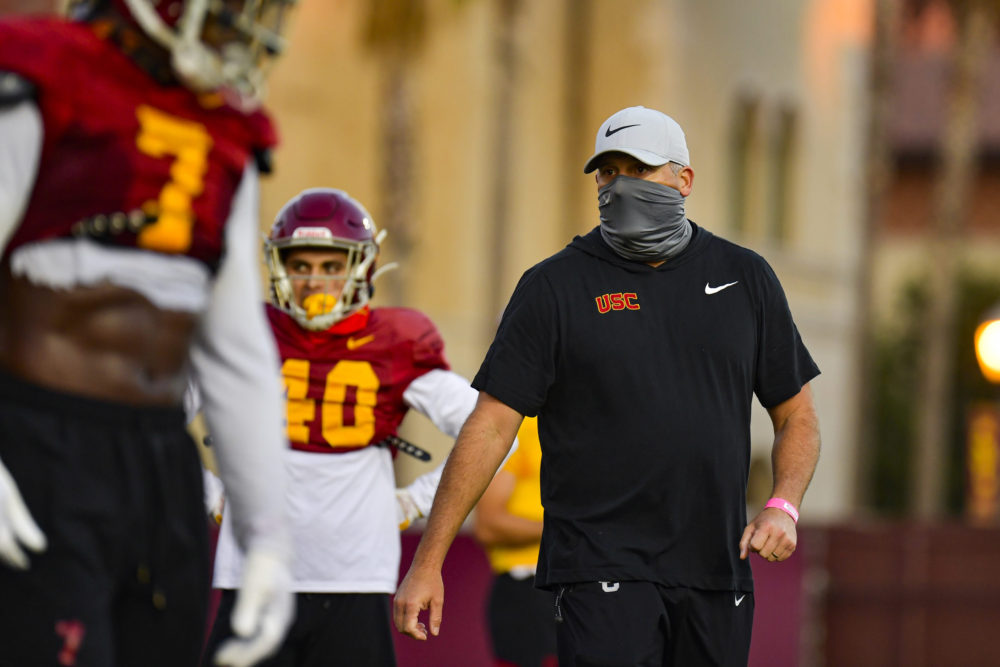 The LA Times published an interview with Clay Helton that is full of gems. I’d
like to dive right in, of course, but the Surgeon General has warned USC fans not to read Clay Helton interviews, and honestly, if I go against his advice and suffer some sort of medical trauma, I have only myself to blame. So I’m going to be careful. I’m going to be cautious. I’m just going to dip my toe into the water.

That means I’m not going to address Clay’s conclusion that the USC program is on the upswing. I’ve already explained that USC did not improve at all between 2019 and 2020. And if Clay’s position is that USC has improved since fielding one of the worst teams in school history in 2018, it’s hard not to agree. Yes, Clay, last year’s squad was better than the shockingly inept squad that you fielded in 2018, the one that Paul Hackett was embarrassed by.

So, sure, the team this year did not spontaneously combust. It did leave a radioactive crater.

The captain of the Hindenburg improved after that unfortunate voyage, too. (Seriously, he survived.) So if that’s the standard, atta boy.

Speaking of Paul Hackett, was anybody else foolish enough to listen to his post-game interviews during his final season? It was always the same thing: we’re so close, and any week now we’re just going to explode. He probably really believed it, too. That’s what failed coaches say, and that’s what failed coaches have to believe. If you ask a coach that is failing whether he thinks next week’s team/next year’s team will be better, he always says yes. What else can he do? He can say (1) we’re on the cusp of greatness or (2) I have no clue, I’ve tried everything I can think of, and we’re probably looking at four or five losses next year, too. Choosing the former isn’t all that difficult a decision.

It doesn’t mean that any of us should actually listen to him. Clay Helton likes the direction of the program. Cool. He said the program was on the verge of winning a national championship after Urban Meyer gave him a nationally televised noogie in the Cotton Bowl, too, right before going 5-7. You say what you’ve gotta say, I suppose. As Chris Rock put it, just lie to me, Jerry.

The one interesting part of Clay’s interview is the number of times he refers to a standard that so clearly no longer applies to USC football. Check out these quotes:

“Really two separate things, to be honest with you. As far as the game goes, we have a standard here. Our standard is championships. For the amount of work and effort that went into getting to that game, to win every game during the regular season, then lose the championship game, our standard is championships. So coming out of that game, nobody was satisfied. As far as myself as the head coach, our staff, our players. That’s USC. That’s the beauty of USC. It’s held to the highest standards and expectations. That’s why you come here. To get all that way in every game, then lose the championship game, obviously leaves a bad taste in your mouth.”

Hmm. Does anybody believe any of that? That the standard at USC is championships, and that each and every year Clay Helton is evaluated on how his performance compared to that standard?

Let’s not dwell on the fact that Clay Helton doesn’t refer to “national” championships. Championships now means winning the conference. That’s a standard that Larry Smith met three times in six years. Ted Tollner did it once in four years.

So USC has made an offer to an offensive line coach. Very exciting news, I suppose. I started to read the guy’s resume so I could analyze it, and then I decided not to bother. Maybe next month. Or maybe I’ll just read the next guy’s resume when he gets hired in late 2021 or 2022.

When I was just a kid, my car threw a rod on I-10. (Yeah, I knew. Like I said, just a kid.) That didn’t seem like a critical time to analyze which guy would do the best job waxing the bumper. The car’s on cement blocks, the engine is missing, and a family of opossums have taken residence in the back seat. Does it really matter whether what kind of experience the new detailer has? I’d rather debate how close that car is to taking us to a championship game. I’m thinking not very.

I don’t know Clay Helton personally, but I’d be willing to bet any amount of money that he’s watched the first season of Ted Lasso six or seven times. Are you kidding me? A program about a completely unprepared coach who finds himself with a job too big for him, has trouble keeping his head above water, and finishes with a disappointing season… but he starts to change minds with fans and media because he’s such a nice guy. Clay should be studying that series like the Zapruder film. I bet Carol Folt has cookies on her desk every morning now. If Clay doesn’t walk into camp in August with a mustache and a Devil Dogs shirt, I’ll be stunned.