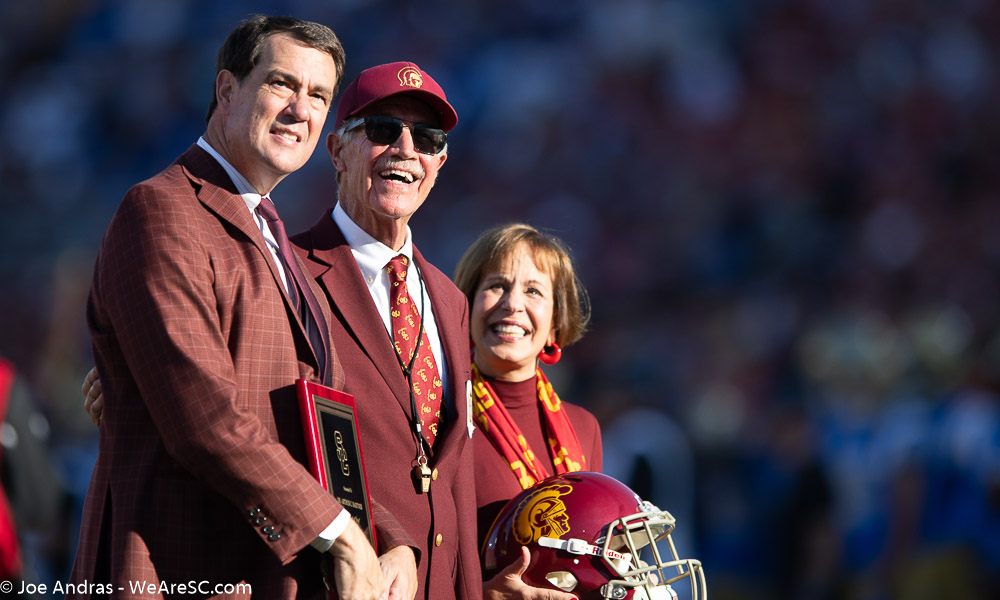 Imagine, for a second, being Mike Bohn.  You get fired at Colorado, which puts your career on life support, but you take advantage of your second chance and resurrect at Cincinnati, strangely enough by hiring a football coach who had tanked in his only season as a head coach but who, in a pleasant surprise, exceeds expectations in his second-chance chance.  You parlay that success into an elite job at a world-class university in a desirable setting where you will oversee one of the most-storied football programs in the nation.  And to top if all off, you’re following Lloyd and Harry, two shockingly incompetent athletic directors, which means that you’ll be heroic by comparison as long as you’re not aggressively inept.

Not bad.  A pretty good recovery, in fact.

But then, almost immediately, your boss cuts your legs out from under you.  After telling the world that she doesn’t get involved in hiring football coaches, she gets involved in hiring football coaches, and she leaves you publicly hitched to a coach whose approval rating is only slighter higher than that of the coronavirus, maybe in part because that coach recently signed the most undeserved, unjustifiable extension this side of Charlie Weis, and maybe in part because she doesn’t know anything at all about football, and doesn’t really care either.

You have to start wearing disguises from the parking lot to your office, you receive feces in the mail, and you have to tell transparent lies to the media – I’m excited about Coach Helton! Recruiting is going great! – to try to pump some positive energy into your flatlining football program.

And that’s not the worst of it. Recently, the only thing separating the athletic department — no, the university as a whole — from the Corleone family is the Corleones’ competence.  USC has been the Tattaglia family.  The former president, who now serves for life on the Board of Directors like some “retired” third world dictator, presided over an administration that was only slightly less of a public embarrassment than Caligula’s (I have it on good authority that Nikias considered having Traveler named Provost.  The funny thing is, he probably should have.  It was a missed opportunity).

Mike Bohn has drawn some fire in this column over the last year or so.  I don’t apologize; Musings beats him up when he doesn’t tell the truth.  That being said, Bohn certainly walked into a brutal situation.

Bohn needed to drain the swamp in Heritage Hall, which was full of long-tenured administrators who helped turn the athletic department into a raging grease fire.  He answers to an in-fighting Board of Trustees that has been, on the whole, either corrupt, stupid, or asleep at the wheel.  And on top of all this, Bohn has to deal with the the post-accident Chernobyl that is the Pac-12 Conference, knowing that if he can’t fix that mess, his department can’t compete nationally with its blue-blood peers in the years to come.  This may be the single biggest problem on his plate.

What are the options?  How should I know?  I’m not a professional athletic director.  I’m only barely more qualified for the job than Lynn Swann was.  But that won’t stop me from offering some suggestions.  And any analysis of the problem must begin with this: the status quo is unacceptable.  The Pac-12 is currently the Venezuela of conferences, with breadlines stretching around the block, and people having to carry wheelbarrows of hard currency to buy a stick of gum.  The conference is badly mismanaged.  It is poor and getting poorer.  The status quo is disastrous.

The mismanagement won’t be easy to fix.  Larry Scott sold a foolish bill of goods to university presidents.  Let’s do it all ourselves, he said.  Yes, the SEC needed a broadcasting partner.  So did the Big 10.  So did Notre Dame.  So did Texas.  But we don’t.  I’ll run it all myself.  It will be great.

And obviously the Pac 12 hasn’t helped itself with the mismanagement at its individual institutions.  UCLA is a dumpster fire.  And USC, the flagship program of the conference, has refused to make a real financial investment in its program (until now?) and saddled itself with a third-rate coach that has lost everybody — fans, alums, media, high school coaches, high school players and parents — everybody, that is, but Carol “I don’t hire football coaches” Folt.

Mike Bohn almost certainly understands all of this, and his recent shots across the bow about all options being on the table is a good start.  Where does USC go from here?  I think it should first maximize its leverage and then use that leverage, something neither of Bohn’s predecessors understood or, if they did understand, were not willing to do.

USC maximizes its leverage by committing to football again.  There’s an easy solution to this problem: hire Urban Meyer.  Do that, and you immediately make your product dramatically more attractive to broadcast partners (And everybody else for that matter). I have nothing else to say about this, because I’ve said it before many times, and practically everybody knows that it’s true.  This move gives you additional leverage.

Then use that leverage.  You have three options.  The first is Act Like The Biggest Bully On The Block: stay in the conference, but only if the conference fires Larry Scott, finds a broadcast partner for the conference, and gives USC a greater share of the proceeds, like Texas gets in the Big 12.

The rest of the conference will howl, with the possible exception of UCLA and Oregon, who can probably also legitimately claim higher-than-average levels of compensation.  It can still be done, I suspect, but only if USC can credibly tell its sister institutions that it’s willing to take options two or three if they don’t cooperate.  Because the only thing worse than paying USC (and maybe a couple of others) a greater share of the money is being part of the Pac-12 conference if USC (and maybe others) are gone.

This brings us to option two: Move To A Nicer Neighborhood.  In this second option, USC joins a new conference, likely the Big 12.  Ideally USC would leave the conference in conjunction with the other California schools, particularly UCLA.  The two LA institutions — despite their ineptitude of late — would be appealing.  A conference like the Big 12 would get two elite academic institutions, two of the premier brands in college sports, an entry into the second-largest media market in the country, and a greater ability to recruit California.  That’s an appealing package.  That’s worth something.  Who else in the conference can offer something that valuable?  That’s right. Nobody. Although the Bay Area schools also bring some things to the table.  Enough with being held hostage by bottom feeders like Wazzu and Oregon State, with whom USC currently equally splits the Pac-12’s meager proceeds.  Should USC continue down that path?

Make that move to the Big 12 with Stanford and Cal and you have the makings of the first 16-team super conference.  The California schools and Texas schools in one division; the schools north and east of Texas are in the other division.  USC-OU and USC-Texas in football.  UCLA-Kansas in basketball.  This is a winning combination.

Does this make travel tougher?  Sure, marginally.  But you’ll still play many of your away games in California, and while Texas, Oklahoma, and Kansas are far from Southern California, so is Washington.  Frankly, it’s a lot easier to get to Austin and Norman than Pullman.  West Virginia is a different story; it may be almost heaven, but it’s also quite a haul from LA.  Schedule few of those trips.  Make it part of the deal.

If you can’t pull that off, you take option three: Screw All Of You.  In option three USC leaves the Pac-12 and goes independent.  A USC fully committed to football with Urban Meyer (or Bob Stoops) at the helm is an attractive media asset.   USC can cut a better deal as a football independent under those circumstances than it can get if it stays and keeps 1/12 of the slop being served up by Larry Scott.

What about the non-football sports, you ask?  Well, first, understand that if the football program isn’t healthy, the other sports are in trouble anyway.  The non-revenue-generating sports need football to be successful.  So they’ll have to do what makes sense for football. And while I understand why the students who play those other sports might think otherwise, and why PR-sensitive athletic directors pretend otherwise, the simple fact is that these other sports aren’t as important.  They’re just not.  I wish those kids the best.  I want USC to win in those other sports.  But you have to protect your most-valuable asset: if BMW were struggling to sell cars, would it really matter if it had a slight uptick in T-shirt and hat sales?

Besides, I think the other sports would be okay.  The Pac-12 would probably still rather have USC’s other sports than not have them.  And if not, if USC’s Brexit — USCexit? Trojexit? — is too bitter a pill for the others to swallow, join the Mountain West in all sports other than football, like Notre Dame did with the ACC.  The Mountain West would be thrilled.  You still get the automatic bids to the NCAA tourneys.  The football program can agree to play three or four Mountain West teams a year in football, would continue to schedule ND and UCLA every year, and could fill the remainder of its schedule with independents (BYU and Army) and home and away deals with other major programs, including the Pac-12 programs, which would likely still want to play in the Coliseum to boost recruiting and their own profiles.  BYU, Army, and Notre Dame all manage full schedules as independents.  Why can’t USC?

So go do it, Mr. Bohn.  It may not be exactly the job you dreamed of, but it’s yours anyway.  Time to get to work.