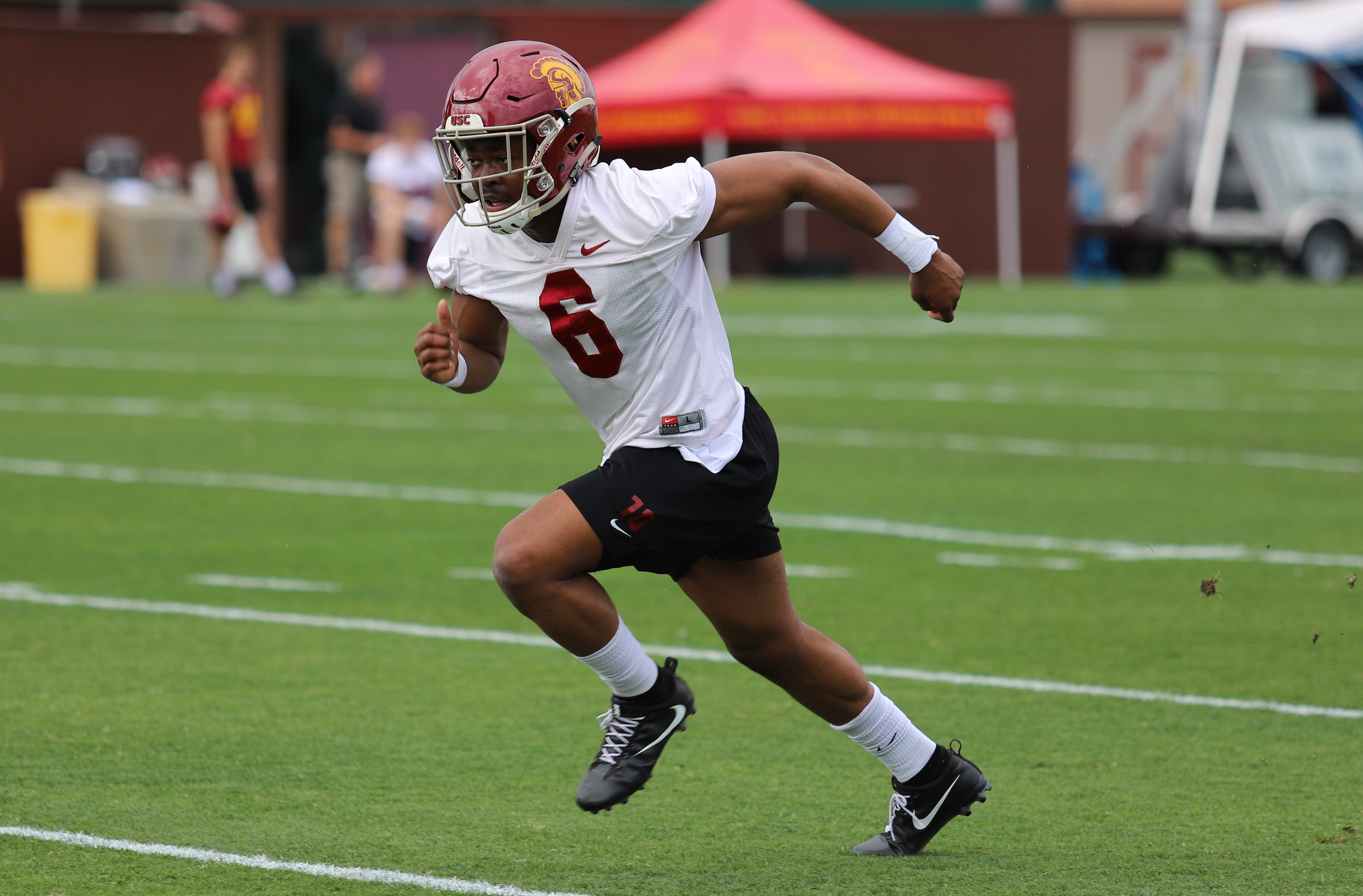 It is rare for a hire to be both predictable and strange. But in hiring Aaron Ausmus as strength and conditioning coach, Helton has managed to achieve both simultaneously. The hire is predictable because, as required by both law and custom since the signing of the Magna Carta, Ausmus has worked at USC previously (he knows USC!), and he also knows Clay Helton, since Ausmus worked at USC under Lane Kiffin. Previous USC experience and a prior working relationship with Clay Helton checks two boxes that are almost always checked these days.

Still, it’s a strange hire because of Ausmus’s resume. Ausmus was on the fast track once. As a young assistant, he was on staffs that won national championships at both Tennessee and USC, and while still in his 20’s, he landed head strength and conditioning jobs at Idaho and, a year later, Ole Miss. Of course, Ole Miss didn’t win very much and Ausmus was fired. He then went to work for Lane Kiffin at Tennessee and USC. Once again, the team didn’t win enough, and Ausmus was fired. That last firing was in 2013. Ausmus hasn’t worked as a college (or pro) strength and conditioning coach since. He has instead been working as a sales rep for Sorinex, a company that makes gym equipment. That’s a long time to be out of coaching before landing a job this big. And it’s not like people don’t know who he is; Ausmus has been the head guy at Tennessee, Ole Miss, and USC, so he’s certainly known in the coaching community. I can’t help but wonder why he’s been away from college coaching for this many years. If Clay Helton had hired an offensive coordinator who has been away from coaching for five or six years and was drawing up plays on the side, we would all be skeptical.

I think we can safely conclude that Ausmus was not Helton’s first choice. If he had been at the top of this list, this hire could have been done a long time ago. This doesn’t mean, of course, that Ausmus can’t succeed. He may prove to be just the disciplinarian and motivator that USC needs. But it is, well, strange.

I listened to a relatively lengthy podcast with Ausmus. There were some interesting things there. He talked about the importance of consistently enforcing your rules and expectations. He says that you get should build your strength program around the things you believe in because you get good at the things you stress, but you also notes that you get what you tolerate. If, as some of us suspect, this USC football program is less serious and dedicated than other blue bloods, it will be very interesting to see what Ausmus tolerates, and whether his efforts at discipline show tangible results on the field.

Ausmus also drew an interesting distinction between his philosophy and that of former Trojan strength coach, Chris Carlisle, for whom Ausmus previously worked at Tennessee and USC. Carlisle’s program was all about tempo: “the bar never stops moving.” But Carlisle learned later that it’s sometimes better to slow things down and focus on technique. I obviously don’t know how stark the difference really is between the two guys and who is ultimately right, but it was interesting nonetheless.

Somewhat concerning to me was Ausmus’s response to the interviewer’s question why some programs succeeded – Tennessee the first time around and USC under Carroll – and others fail; why, specifically, didn’t Ed O’s program at Ole Miss succeed, he was asked. Ausmus didn’t really have an answer. He said that USC turned it around after Carson dove for the pylon in overtime against Oregon State, whereas Ole Miss had opportunities to win a lot of games late and never did. They never had that moment.

This strikes me as an exceptionally weak answer. He was a participant in and witness to Pete Carroll’s success and Coach O’s and Lane Kiffin’s failures. Has he not formed some opinions as to why Carroll was far more successful? I don’t think it’s because USC won that close game against the Beavers (and another close one against Arizona a short time later). Lots of USC coaches have beat Oregon State, and lots have won close games at the end. They didn’t go a run of 7-straight top-4 finishes. I expected something more thoughtful, more promising, than “I don’t know.”

In any event, he’s our guy now. Good luck, Aaron. The Trojan Family needs you to come through and is pulling for you.

I think the player I’m most intrigued by this spring practice is Isaac Taylor-Stuart. Stuart has good size (about 6’2” and 200 pounds) and phenomenal speed. Actually, speed may not be the right term. The right term might be quickness, since ITS’s impressive victories over other elite recruits at 40 yards combined with his less-than-eye-popping high school 100 meter times seem to suggest that he gets to top speed very quickly but may not maintain that speed the way a top sprinter would. For football, that’s perfect. That first 10 or 20 yards is where it’s at anyway.

Does he have the hips to play corner? Will the upgrade of his position coach help him hone his technique? Or is this a guy who should be moved to RB? I’m looking forward to getting answers to this question. The guy just has too much upside to not be a major contributor, I think.

Can I defend football for just a minute? It’s been a tough few years for my favorite sport, with bad off-field behavior and PED’s in the news, and of course with concern over concussions threatening the very survival of the game. Those problems aren’t going away. And there are some real questions to be asked about whether big-time college football is even consistent with the mission of a university. (Bringing in students who are not always academically prepared, then giving them a huge non-academic workload so the university can make a hundred million dollars on this “amateur” sport does raise some red flags.) But can I put in a good word anyway for football as a top-flight educational program?

It was in the classroom that I learned to read, write, and calculate sums. But it was on the football field that I learned many of the most important lessons of life. It was in football, note the classroom, where I learned to fight through adversity, to deal with hardship. I was never the best player on my team; sometimes I wasn’t good enough to start. It’s painful to work hard – and I worked hard – and not see any tangible benefit. You want to quit, blame others for your predicament, give voice to your rage and frustration. It’s awful. It’s great for building character.

It was in football that I learned the value of delayed gratification. Hitting the gym all offseason, running hills, doing footwork drills in the heat of summer, fighting through two-a-days (yep, we had those then), trying to give 100% in March or July because you hope it might pay off on a handful of Saturday afternoons. That’s hard. Yet very few people in this world succeed at anything easily. Usually it’s those who persevere, who slog through the tough days, weeks, months, and years, who do. People need to understand hard work and delayed gratification; football is a great teacher.

It was in football that I learned how to bounce back from setbacks and even failure. We won one game my senior year in college. And I missed that game because of a knee injury, which made me 0-for. I was able to come back late in the season, hoping to salvage something from my senior year. In the last game of the season, we were playing a ranked and very good 9-1 team. I knew I would never put pads on again. I wanted nothing more than to do something great, to help my team pull a big upset, to take away one great memory from a disastrous season. Nope. I gave up two TD’s, one on a play-action pass where I was looking in the backfield and let the receiver get behind me, and the other on a corner route where I used bad technique and got my hips turned the wrong direction. We lost by 7. My coach pulled me after the second TD, and I watched the fourth quarter from the bench. I was a senior, a team captain, and had won all-conference honors the year before, and, pride in shambles, I watched a freshman backup play my spot for a quarter as my team lose a game that I essentially gave away. I was devastated. After 25 years, I can now say what I didn’t believe then: that was good for me. I have dealt with more difficult circumstances since. I suspect I will deal with far more difficult things in the future. Learning to handle what appear to be devastating situations when they don’t, in the grand scheme of things, truly matter that much is a luxury, and football is a great teacher.

Football is one of the places I learned to interact, relate to, and genuinely love people very different from me. Former politician and New York Knick Bill Bradley has spoken eloquently about how his experience working and interacting with black teammates impacted his views on race. He was on to something very important there, and the benefits go well beyond race. I played with people from lily-white country towns, people from the tough streets of East St. Louis, people who grew up in affluence, and people who grew up with nothing. In a world where so many of us do not even interact with, much less relate to and care about people who are different politically, culturally, ethnically, and in all the other things that separate us, I am thankful that I learned early that we don’t need to let all of those things pull people apart.

I don’t know that future of football is. But I have no doubt that sports generally, and football specifically, are a valuable educational tool. I don’t think USC’s players wanted to learn the lessons that come with going 5-7 at a program like USC, lessons that you can only learn when you – let’s call it what it is – fail publicly under a very bright spotlight. Guys who come to USC are the guys who dominated in high school, the ones who reasonably believe they can play on Sundays. Last year must have been a bitter pill. I hope they don’t have to deal with such a situation ever again. I know I sure don’t want to have to watch a season like that ever again. But if these guys want to, they can learn from their experience last year and become better men, men of real character. It may pay off in 2019 or 2020. More importantly, it may pay off for the rest of their lives.